With the 2022 NFL Draft just hours away, there’s still an open question when it comes to who the Jacksonville Jaguars will take with the first overall pick – and how that will impact how the draft plays out after that. 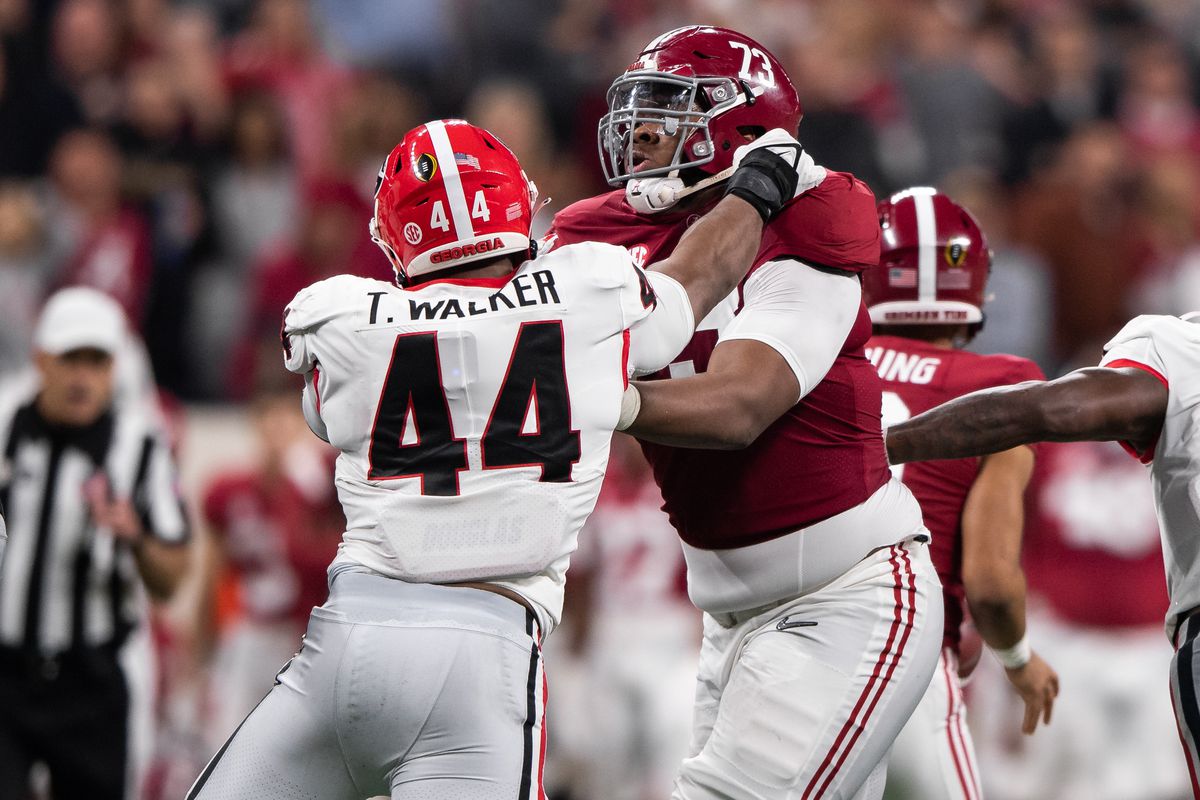 The latest odds say that Travon Walker is the favorite to be the first pick in the 2022 NFL Draft, but the Jaguars’ selection is far from certain. (Image: Zach Bolinger/Icon Sportswire/Getty)

BetMGM lists Georgia defensive end Travon Walker as the -450 favorite to become the first overall pick in the NFL Draft.

ESPN’s Todd McShay agrees with this assessment in his final mock draft. The Jaguars signed Cam Robinson to a three-year extension on Wednesday, seemingly suggesting they aren’t planning on drafting an offensive lineman with the first pick.

That would leave Jacksonville with a choice between Walker and Michigan defensive end Aidan Hutchinson. Multiple journalists – including McShay – have said that the Jaguars seem to favor Walker’s potential upside over Hutchinson, who has the better track record of production at the collegiate level.

For all the talk of how much Jacksonville loves Walker, there has been no definitive statement by the team, and nobody thinks that any team sees much of a gap between the top two edge defenders in this class. That makes Hutchinson an interesting value bet for anyone who wants to go against the growing consensus on Walker.

Numerous players in the mix for top three picks

It’s also possible that the Jaguars still improve their offensive line despite extending Robinson. If that’s the case, then Jacksonville will likely start the draft by picking North Carolina State lineman Ikem Ekwonu (+400). Ekwonu ran a 4.93 40-yard dash at the draft combine this year, showing a combination of speed, agility, and strength that will allow him to make an impact in a variety of ways all over the field.

“When they think of offensive linemen, people get stuck on the numbers, height and weight,” Ekwonu – who lists at 6-foot-4 and 310 pounds – said in an interview, via The New York Times. “But the intangible stuff: Are you flexible? Can you bend? Can you sprint around a corner, get square, keep your balance? That stuff is really important, and it’s all tied to mobility.”

Pete Prisco of CBS Sports still lists Ekwonu as the No. 1 overall pick by the Jaguars, showing just how little consensus there is over this year’s draft.

The drama will go far beyond the first pick. Without a clear hierarchy of talent, this year’s NFL Draft could feature a number of surprises near the top, and there’s very little certainty deeper in the first round.

BetMGM also lists odds for further picks past the Jaguars. The Lions select second, and the odds suggest they will take either Hutchinson (-175) or edge rusher Kayvon Thibodeaux (+110) out of Oregon. By the time the third pick rolls around, anything is possible. The Houston Texans might take LSU cornerback Derek Stingley Jr. (+100), but could also select Ekwonu (+210), Hutchinson (+400), Walker (+800), or Thibodaux (+800) depending on who is still available. Cincinnati cornerback Ahmad Gardner (+400) or Alabama offensive lineman Evan Neal (+700) are also possibilities for the Texans.