The Utah Jazz coughed up a 25-point lead against the LA Clippers to extend their current losing streak to five games in a row, slipping to the #6 seed in the Western Conference playoff standings. As a result, there are whispers in Salt Lake City that this is the beginning of the end of the current version of the Jazz, with All-Star Donovan “Spida” Mitchell eyeing an exit for the bright lights of New York City, and Quin Snyder heading to Hollywood to become the next head coach of the Lakers. 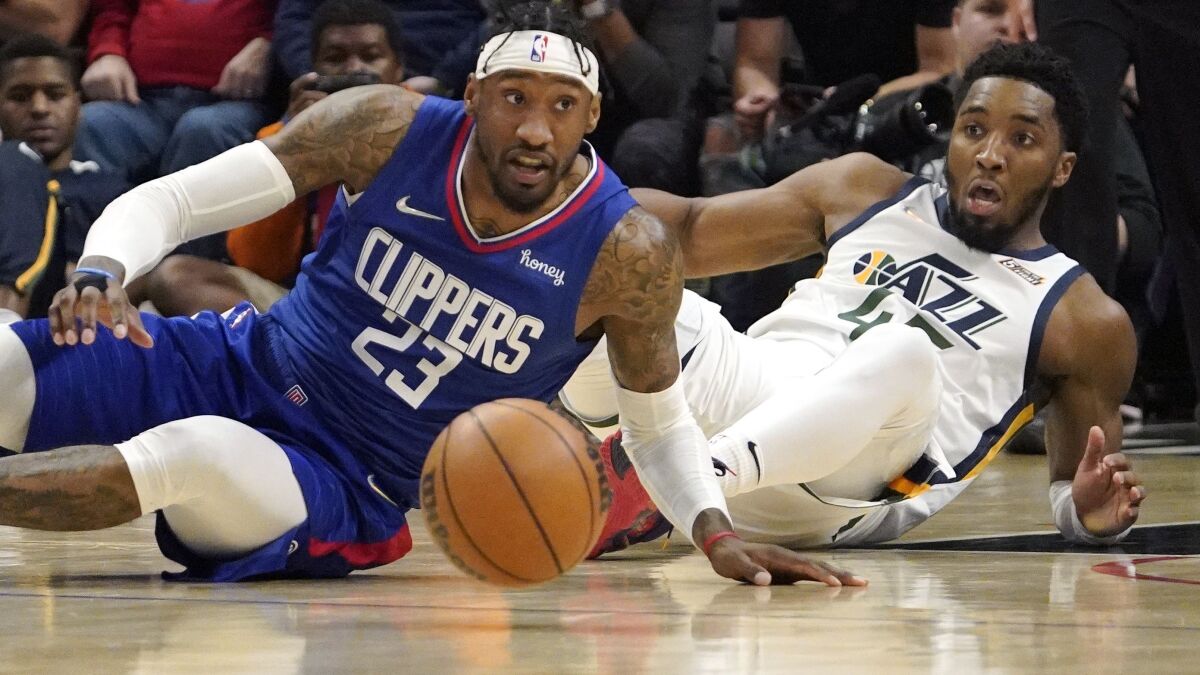 Robert Covington (23) from the LA Clippers and Donovan Mitchell of the Utah Jazz dive for a loose ball. (Image: Mark J. Terrill/AP)

The Jazz (45-31) were propelled by an excellent start with a 26-9 record through the end of December. However, since the ball dropped in Times Square on New Year’s Eve and ushered in 2022, the Jazz have been in a tailspin. The Jazz suffered four-game and five-game losing streaks during a 4-12 stretch in January.

After Mitchell returned to the lineup after missing time with a concussion, the Jazz bounced back with a six-game winning streak to start February, which anchored a 9-1 stretch to move 17 games over .500.

The Jazz followed up an excellent February with a tumultuous March. They went 6-9 since then, including five losses in a row. During their recent slide over the past four weeks, the Dallas Mavericks and Denver Nuggets passed the Jazz in the Western Conference standings.

The Jazz are +2200 odds to win the 2022 NBA championship, according to the Circa Casino and Sportsbook in downtown Las Vegas.

No defense, not sharing the rock

The LA Clippers didn’t spoilPaul George’s return, and they rallied late in the game to defeat a discombobulated Jazz. The loss extended the Jazz’s current losing streak to five in a row.

“We don’t get our hands dirty,” said Gobert after the loss. “It’s just again and again and again. It’s the essence of the way we play. I think it bites us, we just let go. At this point, good teams just know how to get to us. We just get disconnected.”

“It’s the same shit,” said Mitchell. “This is literally, the same.”

The Jazz is two different teams. When they’re winning and passing, they look tough to beat, but whenever they get rattled or outmuscled, the Jazz wilt under pressure. They forget to pass, they make mistakes on defense, and they take too many bad shots.

“It’s the same things,” added Gobert. “It’s defense and it’s sharing the ball. We’ve done it. But, when teams make it difficult for us, we stop doing the right things. We stop playing the right way. When it gets hard for us, we have to want to do it even more. We can’t actually stop doing it.”

Gobert wants the Jazz to play more physically, like some of the teams on the East Coast. However, the Jazz have internal issues simmering to the surface, which is part of the reason they’ve been reluctant to bang bodies and get down and dirty.

Mitchell and Gobert didn’t exactly get along before the COVID-19 outbreak that shut down the NBA in March 2020. Gobert became the first NBA player to test positive for COVID-19. He infected numerous members of the Jazz, including Mitchell, who experienced a nasty bout. The two apparently smoothed out their differences in the NBA playoff bubble in the summer of 2020. However, that was nearly two years ago and there’s been a growing rift between Mitchell and Gobert since then, along with Gobert and the rest of the locker room.

Gobert is an acquired taste. He has an abrasive personality and doesn’t mince words. He gets under peoples’ skin, which is great when he’s irritating the opposing team, but is problematic when he’s the giant asshole in the locker room.

The growing divide between Mitchell and Gobert has led to rumors that Mitchell will demand a trade in the offseason. Mitchell grew up in Westchester in the New York City suburbs and he’d like to play for his hometown Knicks. Spida at MSG would be insane.

If the current Jazz split up, expect head coach Quin Snyder to seek employment elsewhere like the LA Lakers. He’s been rumored to replace Frank Vogel as the Lakers’ head coach. The Lakers are on the verge of missing the playoffs and need a scapegoat for a disastrous season after trading away a slew of role players to the Washington Wizards in exchange for Russell Westbrook. It’s not Vogel’s fault that Westbrook didn’t mesh with the Lakers, but someone needs to be the fall guy. With Vogel a dead man walking in Hollywood, Snyder has made the shortlist of head coaching candidates.