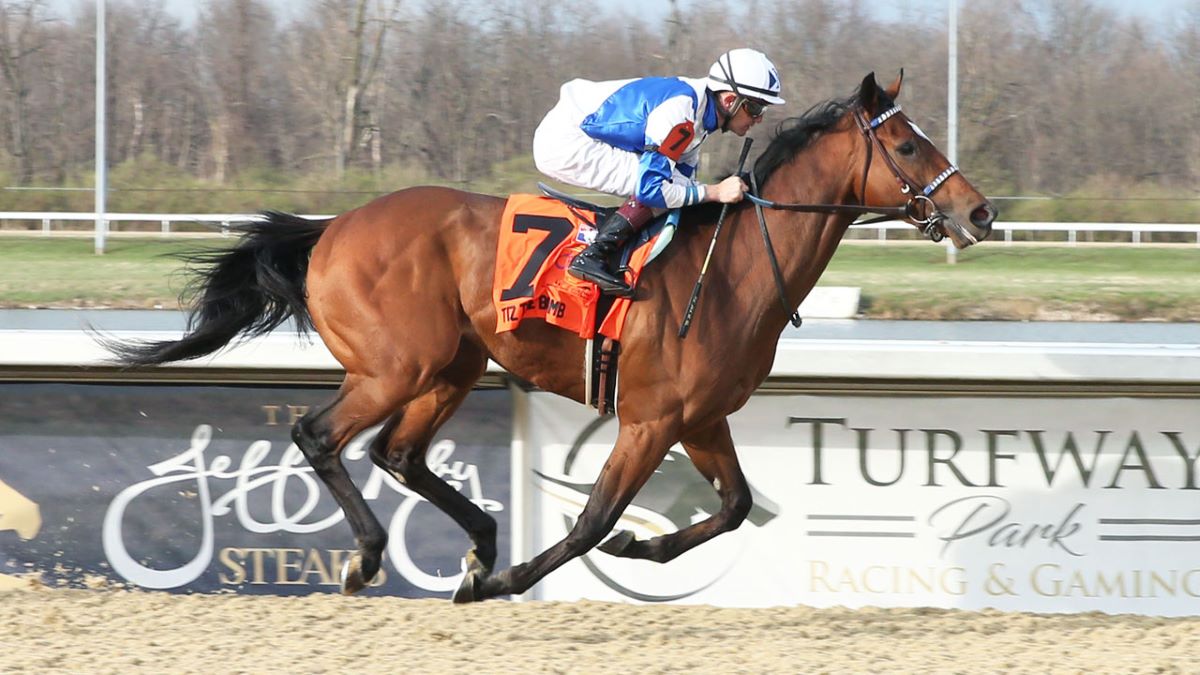 Tiz the Bomb likely saw his last synthetic race in this April Jeff Ruby Steaks victory at Turfway Park. He will move back to his preferred turf surface for the Grade 1 Belmont Derby Invitational next month. (Image: Coady Photography/Turfway Park)

That July 9, 1 1/4-mile race at Belmont Park opens the New York Racing Association’s Turf Triple Series. That trio of turf tests for 3-year-olds continues with the 1 3/16-mile Grade 1 Saratoga Derby Aug. 6. It concludes with the $1 million, 1 1/2-mile Jockey Club Derby back at Belmont Park in September.

You last saw Tiz the Bomb finish ninth in the Kentucky Derby last month. That finish — 12 1/2 lengths behind Rich Strike — came in his return to dirt. He broke slowly, then rallied for a top-half finish in the 20-horse field. None of this troubled McPeek.

“I thought he really needed to break clean and be positioned to run better in the Derby, but he didn’t disgrace himself,” McPeek told NYRA. “It could have gone better, but we gave him his chance, which he deserved.”

Tiz the Bomb detonates on plastic

McPeek gave Tiz the Bomb his chance after he won consecutive races on Turfway Park’s synthetic. That included the Grade 3 Jeff Ruby Steaks as his pre-Derby ticket-puncher.

The Turfway Tapeta is one of three surfaces Tiz the Bomb conquered. He broke his maiden in an off-the-turf race last July at Ellis Park. Then, Tiz the Bomb won back-to-back turf stakes: the Kentucky Downs Juvenile Mile and the Grade 2 Bourbon. He followed that with a runner-up to Modern Games in the Breeders’ Cup Juvenile Turf at Del Mar.

Tiz the Bomb opened his 3-year-old campaign with a troubled seventh in the Grade 3 Holy Bull at Gulfstream Park. Even as McPeek put the son of Hit it a Bomb on the Derby trail, he knew the grass was the ultimate greener destination. That’s where you’ll find the millionaire padding his earnings going forward.

Dirt was a learning experience

“I definitely think he’s significantly better on the grass,” McPeek said. “We gave him his dirt try and he’s a lovely horse. I’m excited. These next couple races are really good spots for him — great distances and surfaces.”