When Santa Anita Park morning line author Jon White sat down to make the morning line for the Grade 1 Santa Anita Derby, he faced one of those conundrums every morning line writer faces from time to time. With two pretty equal horses, who does he give favorite status to? 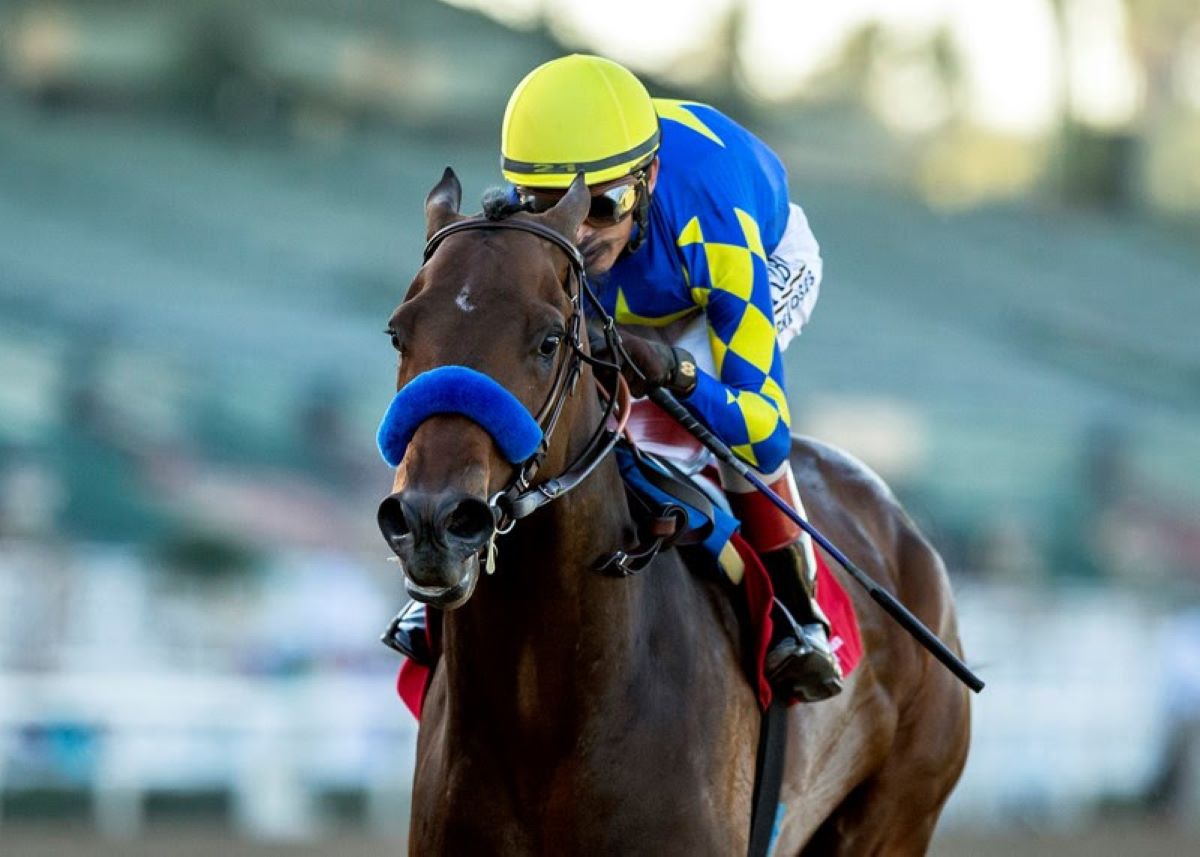 Messier has the fastest Beyer Speed Figure of any 3-year-old this season. He is racing for Kentucky Derby points for the first time in Saturday’s Grade 1 Santa Anita Derby. (Image: Benoit Photo)

This conundrum starred Messier and Forbidden Kingdom, clearly the two best colts in the six-horse, 1 1/8-mile Kentucky Derby prep. Does White make Messier, who won his last race by 15 lengths, the favorite in one of the signature Derby prep races in the country? Or does he opt for Forbidden Kingdom, he of the combined eight-length victories in the San Vicente and San Felipe?

This was more than splitting hairs. White takes no small measure of pride in his morning line work, accurately hitting the favorite 77% of the time last year. And the Santa Anita Derby is no small Derby prep. This is a race that sent 20 horses to the Churchill Downs winner’s circle. It’s a race sending 11 of its winners to rose garlands the first Saturday in May. That includes the likes of Swaps, Majestic Prince, Affirmed, filly Winning Colors and Sunday Silence. It also includes three in the last decade: I’ll Have Another (2012), California Chrome (2014) and Justify (2018).

So yes. This is something White wanted to get right. What did he do?

“When all was said and done, I decided to make Messier the morning-line favorite at even money, with Forbidden Kingdom just a notch higher at 6/5,” White wrote in his XpressBet column this week.

White said he did this for a couple reasons. First, Messier has been the favorite in all five of his races. Four of those, as Santa Anita’s Ed Golden pointed out, came at odds-on. Forbidden Kingdom grabbed favorite status in only two of his five.

Second, these two tangled already, at last year’s Bob Hope Stakes at Del Mar. Messier left the gate as the 6/5 favorite. Forbidden Kingdom left at 5/1. White wrote that line and got it right. Messier won by 3 ½ lengths over Forbidden Kingdom, who bobbled at the start – something you can’t do against a horse with Messier’s speed.

Messier’s speed puts him atop his class

Named after six-time Stanley Cup winning center Mark Messier, Messier’s speed is well chronicled. That 15-length romp in the Robert B. Lewis at Santa Anita came with a 107 Equibase Speed Figure and 103 Beyer Speed Figure. Those lead this 3-year-old crop. That Messier has never finished worse than second in five races (3-2-0) backs up the fact he is an electric Derby prospect.

And this is Messier’s first Derby prep “for keeps.” He was ineligible for Derby points due to Bob Baffert’s Churchill Downs suspension. Baffert transferred the colt to former assistant Tim Yakteen two weeks ago, putting Messier in prime position to snatch enough points from this race.

Messier is one of three former-Baffert/current-Yakteen charges in the six-horse field. Armagnac (20/1) and Taiba (4/1) being the others. Taiba has a 103 Beyer on his resume, clocked in his one and only race: a 7 ½-length dissection in a six-furlong sprint. He comes from the same Amr Zedan stable as the late Medina Spirit and brings the same pace-pressing style as Messier.

But both of them could be chasing Forbidden Kingdom, who illustrated how lethal he is on the lead. He went gate-to-wire in both his 2 ¼-length and 5 ¾-length victories in the San Vicente and San Felipe, respectively. Leaving Forbidden Kingdom alone on the lead makes him hard – if not impossible – to catch. That’s borne out by his 3-1-1 record in his five races. It’s also borne out by his last two Beyers: a 94 and 98, and his last two Equibases: a 106 and a 102.

Expect John Velazquez aboard Messier and Mike Smith aboard Taiba to press Forbidden Kingdom early. That should create a scintillating race that once again illustrates why the Santa Anita Derby is one of the best Derby preps on the entire Kentucky Derby trail.