The Sacramento Kings are desperate to end their 16-year playoff drought and it looks like they’re serious about trying to climb out of the Western Conference basement when they added a pair of shooting guards to the roster by acquiring Kevin Huerter in a trade with the Atlanta Hawks, and they also signed Malik Monk to a two-year contract via free agency. 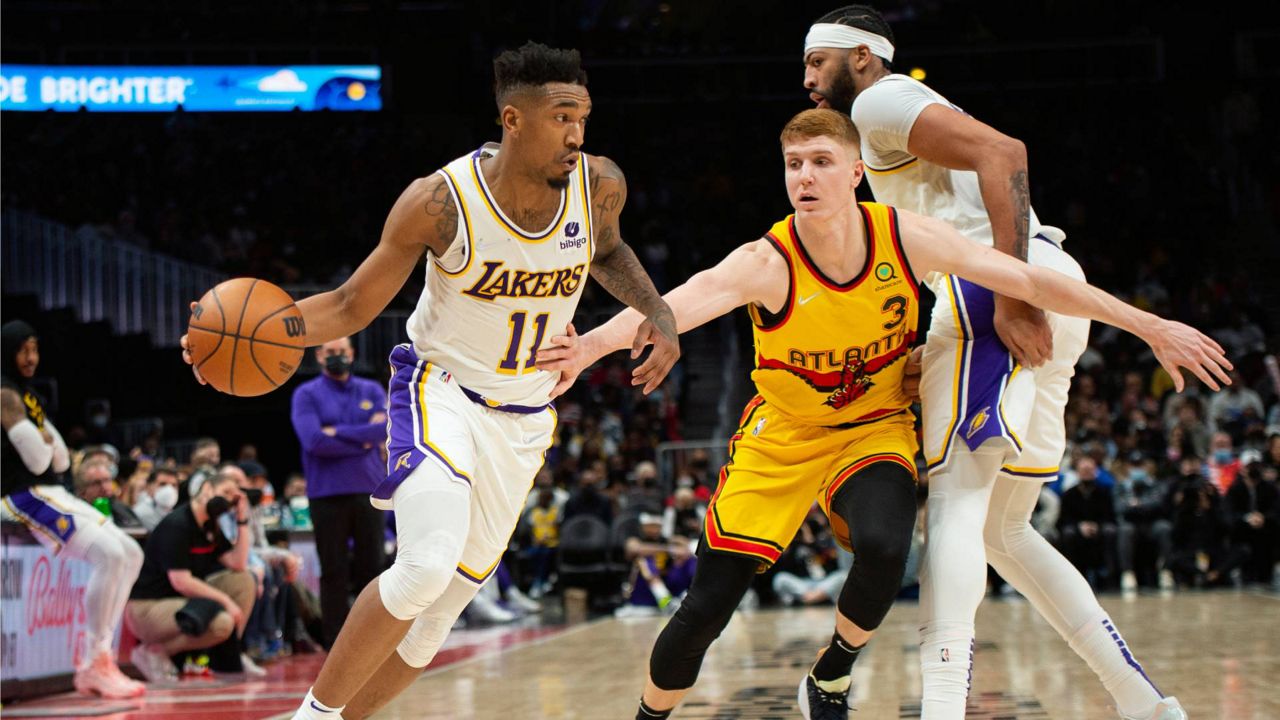 Malik Monk from the LA Lakers drives against Kevin Huerter of the Atlanta Hawks last season, but the two will be teammates next season with the Sacramento Kings. (Image: Getty)

With so much chatter surrounding huge contract extensions, big-time free agency moves, and trade talk involving Kevin Durant and Kyrie Irving, it was easy to overlook the Sacramento Kings.

The Kings bolster their backcourt with Monk and Huerter, and there’s a good chance that their previous teams will miss their spot-up shooting next season. Huerter and Monk will compete for the starting shooting guard position and the odd man out will most likely become the sixth man for the Kings.

The Kings have a decent starting five anchored by De’Aaron Fox and Domantas Sabonis. There’s also Harrison Barnes and presumable rookie Keegan Murray — the #4 pick in the 2022 NBA Draft — joining Huerter or Monk. The Kings will have either Monk or Huerter in their second unit along with backup point guard Davion Mitchell and forwards Trey Lyles, Chimezie Metu, and Jeremy Lamb.

The additions at shooting guard did not alter the futures market. The Kings are +8000 odds as one of the long shots to win the 2023 NBA championship on the betting board at DraftKings.

The Atlanta Hawks sent Huerter to the Kings in a trade that included Justin Holiday, Moe Harkless, and a 2024 first-round pick that’s lottery protected.

The Hawks drafted Huerter out of Maryland with the #19 pick in the 2018 draft. He started nearly 79% of the 274 games he appeared in with the Hawks and quickly earned the nickname “Red Velvet” for his red hair and silky-smooth shooting motion. He was a career 37.9% 3-point shooter and he averaged 12.1 ppg last season as Trae Young’s backcourt mate.

After the Hawks secured Dejounte Murray in a trade with the San Antonio Spurs, it was fairly obvious that they would deal Huerter. Murray evolved into one of the best two-way guards in the league and the Hawks needed to upgrade their defense.

The Hawks found a trade partner for Huerter with the Kings, who are now on the hook for Huerter’s four-year contract worth $65 million which begins this season.

The Hawks added a second Holiday brother to their squad. Justin Holiday played for the Hawks during the 2015-16 season, and he returns to join his brother Aaron, who recently signed a one-year deal. Holiday began last season with the Indiana Pacers before they traded him to the Kings before the deadline. In 74 combined games last season, Holiday averaged 10.1 ppg.

Kevin Huerter put why he signed a contract extension into perspective. pic.twitter.com/l1C2vZmSPf

Monk, 24, decided to get paid with the Sacramento Kings rather than make a min-wage in LeBron James’ sweatshop with the LA Lakers. The cap-heavy Lakers wanted to retain Monk for peanuts, but he bolted for Sacramento for a payday worth $19 million over the next two seasons. He’s set to earn $9.2 million this upcoming season in Sacramento, and then will get a bump to $12.6 million next season with the Kings.

Let’s be honest, the Kings are moon shots to win the title, but there’s a slim chance the Lakers actually win another championship in the next two seasons. And that’s even if they pull off a huge trade to add Kyrie Irving while finally dumping Russell Westbrook.

The Lakers saw an uptick in their 2023 championship odds to +1100 with fans backing the team based on the Irving trade rumors.

The Charlotte Hornets selected Monk out of Kentucky with the #11 pick in the 2017 NBA Draft. Monk struggled in his first two seasons but looked like he was finally finding his groove with the second unit in his last two seasons in Buzz City. Monk signed a one-year trade exemption deal with the Lakers last season for just under $1.8 million.

Last season, Monk was one of the rare highlights in an otherwise dismal season with the Lakers. He set a career high 41 points late in the season against the Denver Nuggets, and the Kings took note.