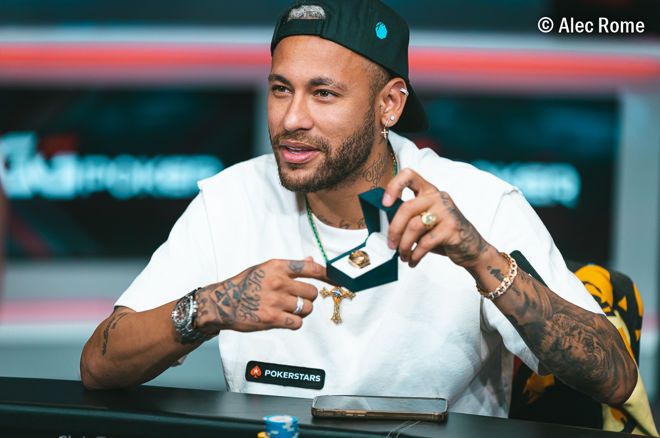 The World Series of Poker (WSOP) always brings out some celebrities, but it’s hard to find a bigger international superstar than the great Neymar Jr., a PokerStars Cultural Ambassador who took a shot at a gold bracelet on Sunday.

Paris Saint-Germain’s legendary forward entered Event #26: $10,000 Limit Hold’em Championship, but he was unable to cash or even reach Day 2. He wasn’t the only non-poker celeb in the 92-player field. FiveThirtyEight’s Nate Silver, who was a limit hold’em pro many years ago, also showed up to play, and fared about as well as the soccer legend.

While it was the first time he competed in a gold bracelet event, it wasn’t the first time Neymar showed up at the WSOP. Back in 2015, he made an appearance at the Rio in the Amazon Room during Day 5 of the 2015 WSOP Main Event to show support for Brazilian players.

A Few Hands with Neymar

During his time in the tournament, Neymar showed that he was willing to get involved in the action in the early going, playing lots of hands and fighting for every pot. PokerNews hung around his table for a few hands in Level 3 (400/800) and to see what he was up to. Here are a six consecutive hands played by Neymar in his WSOP gold bracelet event debut.

Hand #1: Neymar raised it up from early position and Kosei Ichinose three-bet from the small blind. Neymar called and they went heads-up to a flop of

landed on the turn.

Ichinose bet the turn and the

river and was called both times by Neymar. Ichinose turned over

for queens and nines which was the best hand.

Hand #2: Neymar decided to take a hand off and folded from under the gun.

Hand #3: The action folded to the button who raised it up and was called by the small blind and Neymar in the big blind. The flop came

and the blinds checked to the button who threw in a bet. The small blind called and Neymar check-raised, getting called by both opponents.

The turn brought the

and Neymar continued firing. Both opponents still called and the

landed on the river. Neymar bet one more time and was only called by the button. Neymar showed

for a missed straight draw while his opponent held 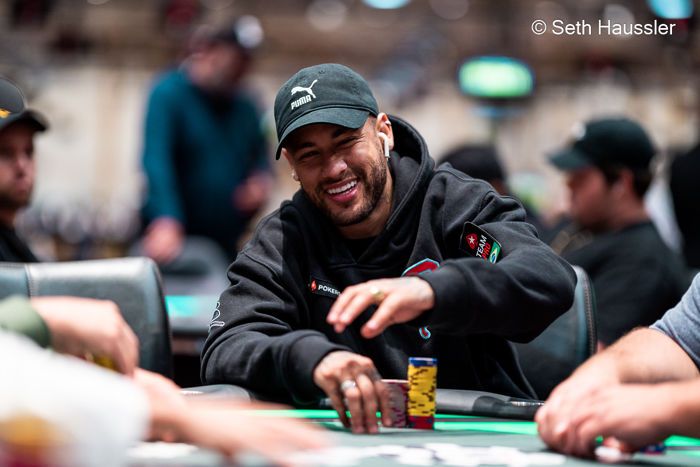 Hand #4: There was a raise from early position and the button three-bet. Neymar four-bet from the small blind and the initial raiser capped it with a five-bet. Both the button and Neymar called to see a flop of

Neymar checked and the player in early position bet. The button raised and Neymar three-bet, which both players just called. The turn was the

and Neymar led out with a bet this time. Both of his opponents still called.

and Neymar tossed in another bet. The player in early position called while the button folded. Neymar tabled

which proved to be the best hand.

Hand #5: Neymar elected to fold his button in a three-bet pot.

Hand #6: Kosei Ichinose raised it up from middle position and the hijack and Neymar in the cutoff both called. The flop fell

and Neymar called a bet from Ichinose.

They went heads-up to the

on the turn where Ichinose bet again. Neymar raised this time and Ichinose stuck around to see the

on the river. Ichinose check-called a bet from Neymar and the Brazilian footballer tabled

for two pair to win another hand.

Neymar Having a Blast at the WSOP

On Monday, Neymar returned to action at the WSOP for a 16-player private sit n’ go. We aren’t privy to the details of the game but our sources have informed us that the outcome wasn’t a win for the Brazilian athlete.

The 30-year-old footballer will forever be most known for his prowess on the pitch. But he’s also become quite the avid poker enthusiast, and his poker game is probably better than you might think. 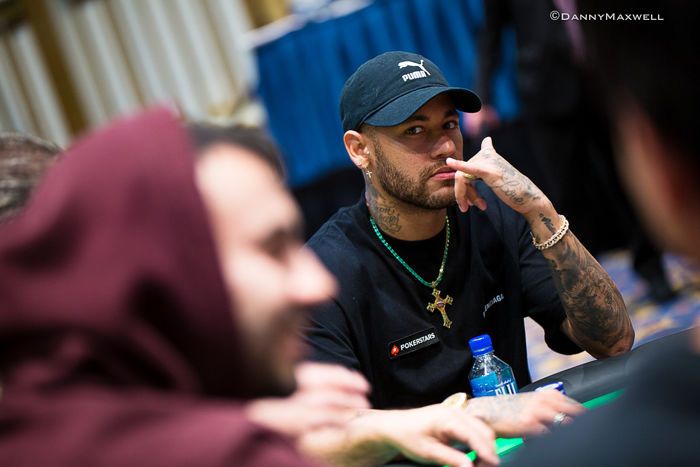 PokerStars signed Neymar as a Cultural Ambassador earlier this year to reach out to a wide international audience. It would be difficult to find someone who could better accomplish that goal. After all, Neymar is considered by most sports analysts one of the top three or four most popular athletes in the world. He has nearly 57 million Twitter followers and millions of fans across the globe.

At age 30, one would think his star will only continue to rise. The Olympic gold medalist from Brazil has scored at least 100 goals for three different clubs, and is one of just three players ever to achieve that feat. At the poker table, he hasn’t yet won any big events, but there’s a pretty good chance that will change by the time he retires from soccer.

Neymar often plays against fellow Brazilian and PokerStars ambassadors Andre Akkari and Rafael Moraes, long-time poker pros. The talented athlete, from what we’ve been told, has held his own on the felt against the poker stars.

“Lately, I’m ahead of both them both,” He grinned. “The last time we played, I beat them. We play a lot when we go to Brazil and they are two guys that became my friends through poker.”

It was also not lost on the soccer player how beneficial it might be to have two poker titans in his corner.

“Every conversation we have, I learn from them. So, I’m very proud to have two giant players in the poker world being my friends and having free lessons, right?”

On Sunday, Neymar was spotted smiling for pictures with his fans. Perhaps he’ll grace the WSOP with his presence a few more times this summer.