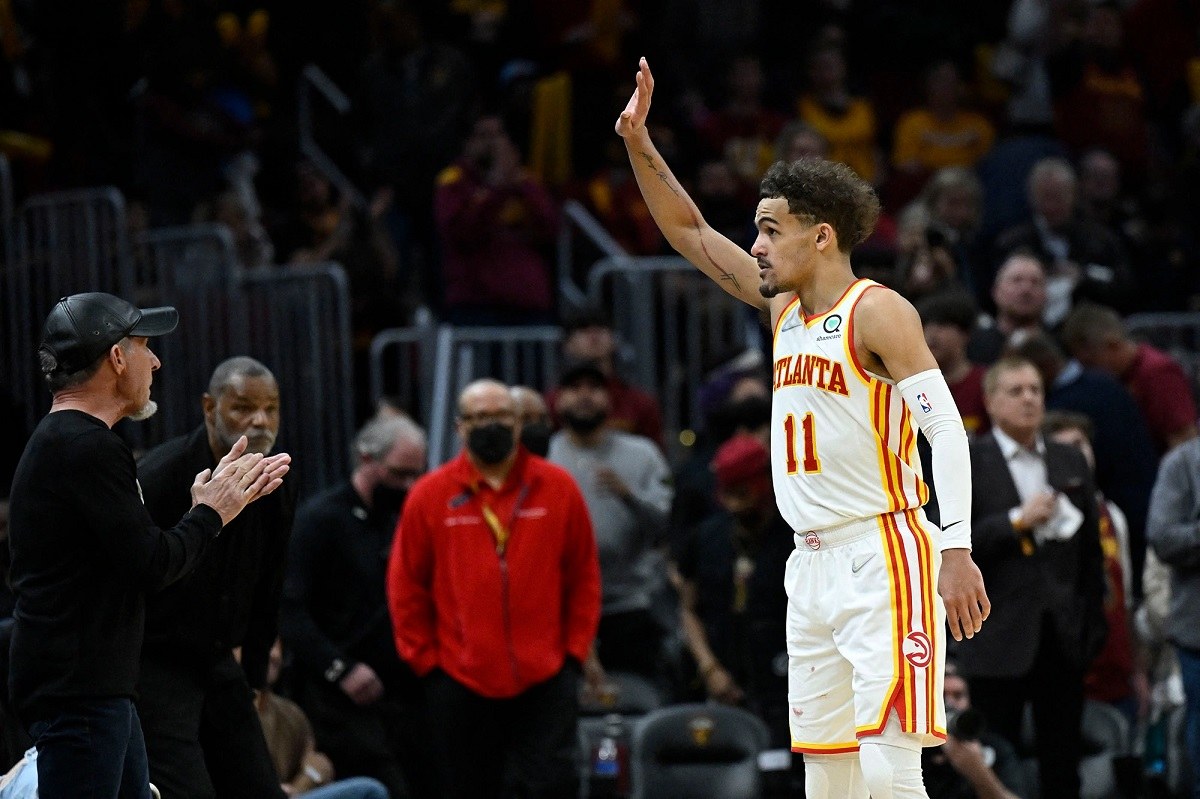 Trae Young from the Atlanta Hawks waves goodbye to the crowd in Rocket Mortgage FieldHouse after the Cleveland Cavs were knocked out of the Play-In Tournament. (Image: David Richard/Getty)

Both the Hawks and Pelicans finished in ninth place in their respective conferences and defeated the eighth-place teams to advance to the postseason.

The Hawks now have a first-round date with the #1 Miami Heat in the Eastern Conference Playoffs. The Pelicans will play the #1 Phoenix Suns in the Western Conference playoffs.

The Cleveland Cavs got Jarrett Allen back in the lineup in the Play-in Tournament, after he missed the final 19 games of the regular season with a fractured finger. With Allen on the floor, the Cavs looked like their old self and built up a double-digit lead in the first half. Their defense also kept Trae Young in check and held him to just six points.

The Hawks overcame a ten-point halftime deficit thanks to Young, who erupted for 32 of his game-high 38 points in the second half. Young scored 16 points in the third quarter and knocked down multiple “logo shots” and deep 3-point bombs.

“He made shots from the jump circle,” said Cavs head coach JB Bickerstaff.

Young silenced the hostile crowd in Cleveland, and put away the Cavs with 16 more points in the fourth quarter.

“We took care of business,” Young said. “It’s a testament to our team that we kept fighting and finished the job.”

Lauri Markkanen led the Cavs with 26, and Darius Garland added 21 in the loss.

The New Orleans Pelicans held off the “Cardiac Clippers” when the Curse of the Clippers reared its ugly head n the Play-In Tournament. The Clippers thought the dreaded curse was lifted last season after advancing to the Western Conference Finals for the first time in franchise history. Alas, the Clippers Curse loomed large when Paul George tested positive for COVID-19 on Friday morning and missed the game.

The Clippers didn’t blink because they played the bulk of the season without George. Even when they fell behind by 16 points, the Clippers hunkered down and stormed back to take a 13-point lead.

However, the Pelicans launched a successful counterattack in the fourth quarter thanks to an 11-0 run to get back into the game. The Pelicans held the Clippers to just 17 points in the final frame.

“That win was big-time,” said Pelicans head coach Willie Green. “It was an emotional game, a ton of highs and lows. But for us, our mentality is we’re going to continue to fight. We’re not going to fade out.”

Reggie Jackson and Monte Morris both scored 27 points in the loss. The Clippers couldn’t hit a 3-pointer to save their lives with a 9-for-36 clip, or just 25%. The starters were 6-for-27 from downtown. Jackson and Morris missed seven treys each, and Nicolas Batum shot 0-for-5 from beyond the arc.

“I am disappointed in us not being able to make the playoffs, no matter who was playing,” said Clippers head coach Ty Lue.

Check out OG’s coverage of the 2022 NBA Playoffs.