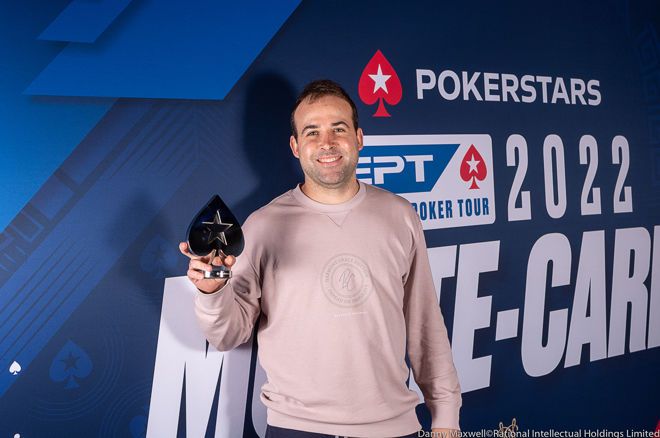 The 2022 PokerStars European Poker Tour presented by Monte-Carlo Casino®️ continued with the €50,000 No-Limit Hold’em, and after a bit over twelve hours of play, Pascal Lefrancois emerged as the victor following a heads-up deal with Seth Davies at the Monte-Carlo Sporting complex on the French Riviera.

Mikita Badziakouski, Mikalai Vaskaboinikau, and Laszlo Bujtas all reached the final table in the €100,000 Super High Roller before jumping into this Single Day High Roller. However, they would all fall short of the money.

Other players to miss out on the money included defending champion Matthias Eibinger and PokerStars Ambassador Sam Grafton who both made the final table but failed to cash.

Badziakouski’s eliminate burst the bubble, with Lefrancois moving to the top of the counts shortly thereafter. The Canadian continued to add to his stack after Timothy Adams ran ace-jack into ace-king, which eliminated Adams in sixth.

The winner and runner-up of the earlier €25,000 Single Day High Roller were next to go. Runner-up in that event Daniel Dvoress was followed out the door by winner Yuri Dzivielevski, both players eliminated by Seth Davies.

Mike Watson quickly looked to spin up his stack, having laddered his way into three-handed play, but lost out to Lefrancois to bust in third.

Lefrancois and Davies immediately agreed to a deal, negating the need for heads-up play. Lefrancois held over double the chips as Davies, and thus received the higher amount and the PokerStars trophy which comes with the title.