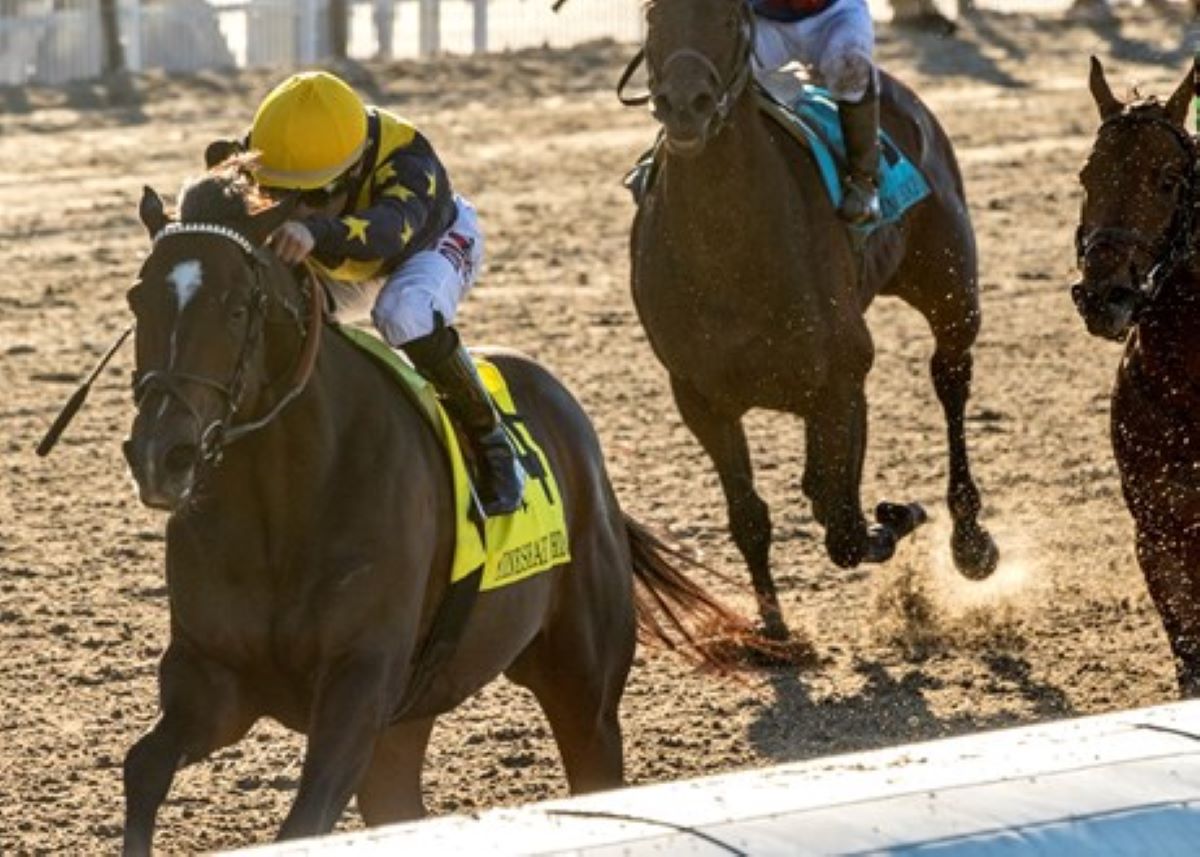 That compelling, easy-to-understand reason doubles as a record-setting reason. That’s exactly what Olympiad did the last time he traveled to Louisiana from trainer Bill Mott’s winter base at Gulfstream Park in Florida.

No matter. Records are records and Olympiad is back in search of more. Mott and the rest of the 4-year-old Speightstown colt’s connections would settle for Olympiad’s third victory in as many 2022 starts and fifth overall.

Olympiad stands tall at the podium

This year, there was that Mineshaft victory as the even-money favorite. That came over a field of recognizable names including Silver Prospector (second), O Besos (fourth), Sprawl (seventh) and Midcourt (eighth). Before that, Olympiad destroyed a Gulfstream Park allowance field by 7 1/4 lengths as the 3/5 favorite.

That’s two victories in as many months by nearly 10 combined lengths. In seven career races, Olympiad failed to finish in the exacta twice: a third in his August 2020 debut at Saratoga and a fourth in last year’s Grade 1 Cigar Mile at Aqueduct. In that race, Olympiad clipped heels with Independence Hall at the three-quarters pole, then got sucked six-wide outside. He finished 4 1/2 lengths back of Americanrevolution.

“That’s the kind of horse that makes your work very easy,” jockey Junior Alvarado said after the Mineshaft. “He leaves the gate, you nudge him a little bit, and he takes you for a nice ride the whole way. The longer stretch helped him today. He’s a horse that needs more than a 1/16th-mile stretch run to pick it up.

Seeking to jostle Olympiad off his podium are two more familiar names in the 1 1/8-mile New Orleans Classic: Proxy and Super Stock.

Remember Proxy? If you followed Fair Grounds’ stops on the 2021 Kentucky Derby trail, you watched Proxy finished second in the Grade 3 Lecomte and Grade 2 Risen Star. Then, you watched Proxy regress to fourth in the Louisiana Derby and the Lexington Stakes at Keeneland.

Then, you didn’t see Proxy for the next 10 1/2 months, until he re-emerged Feb. 25 with a 3 3/4-length victory in a Fair Grounds allowance optional claiming race. That score in his 4-year-old debut taught trainer Mike Stidham that he had a different horse from the often-immature one he wrestled with last spring.

“In the mornings, he’s a bigger, stronger, better horse now with a little more maturity,” Stidham said. “Last year, he’d go out there in the mornings and he wasn’t really interested in working well, but you can see from his tab leading up to this, he is doing things a little different now. He ran with blinkers in his last two starts (last year), but watching those races, we didn’t see where they helped him, so we didn’t think twice about taking them off.”

As for Super Stock, last year’s 16th-place Kentucky Derby finisher seeks his first graded stakes score since his Arkansas Derby upset last April. He does have victories in the Ellis Park Derby and Zia Park Derby, both Listed Stakes. And the 4-year-old Dialed In colt needs to dial back in after a troubled third-place trip in last month’s Grade 3 Razorback Handicap at Oaklawn Park.

“He’s never raced here, but he has worked well here,” said trainer Steve Asmussen, who works the horse for brother Keith and Erv Woolsey, the manager for country music star George Strait. “It’s a good opportunity for him. I didn’t like the trip he got last time. We think he is better than that and we think the change of scenery may just wake him up a little bit. It’s a good race and we are hoping he goes out there and proves us right.”