The #8 seed and final spot in the Western Conference playoffs are up for grabs when the Los Angeles Clippers host the New Orleans Pelicans in a single-elimination game and final leg of the NBA Play-In Tournament on Friday night in Hollywood. 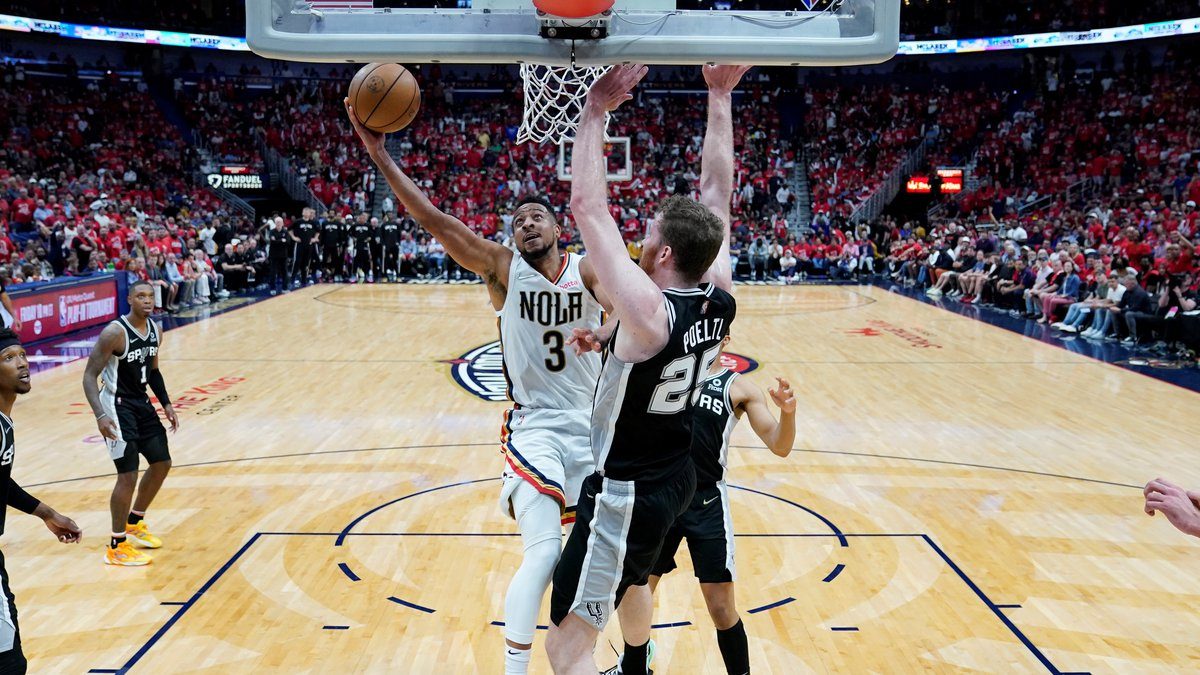 CJ McCollum from the New Orleans Pelicans drives the lane against Jakob Poeltl from the San Antonio Spurs in the Play-In Tournament. (Image: Getty)

The Pelicans won their first game in the Play-In Tournament when they defeated the San Antonio Spurs in the ninth-place vs tenth-place game on Wednesday evening.

The Clippers missed a chance to secure the #7 seed when they were upended by the Minnesota Timberwolves on Tuesday night. The Clippers have one last chance to qualify for the postseason, but it comes down to a one final game between the Clippers and Pelicans to see who has a date in the first round against the #1 Phoenix Suns. The loser bubbles the playoffs and starts packing for their vacation.

The Clippers (40-42-1 ATS) opened as a -4 favorite against the visiting Pelicans (42-40-1 ATS). The Pelicans were 3-1 against the Clippers this season, but the Clips won the last meeting with a 19-point victory in LA two weeks ago.

The Clippers are +7000 odds to win the 2022 NBA championship, but the Pelicans are one of the biggest long shots on the futures board at +3000 odds.

The Pelicans have a solid Big 3 with CJ McCollum, Brandon Ingram, and Jonas Valanciunas after they acquired McCollum in a trade with Portland. All three can create their own shot and knock down jumpers if someone else gets double teamed.

The Big 3 from the Pelicans combined for 81 points against the Spurs in the first Play-In Tournament game. McCollum led the way with 32 points, Ingram chipped in 27, and Valanciunas added 22 points and 14 rebounds.

“We have to ride those guys,” said head coach Willie Green. “When you get to this point in the season, you’ve got to bump their minutes up a little but more. We’re going to run more plays that go through them and allow them to create for others, and they did a heck of a job against the Spurs.”

McCollum set the tone for the first play-in game with 27 points in the first half, including 15 in the second quarter. He had a somewhat quiet second half with five points, but when the Spurs focused on shutting down McCollum, it opened up more space for Ingram and Valanciunas to inflict damage.

Zion Williamson, who missed the entire season with a foot injury, worked out with the Pelicans before their game against the Spurs, but he’s still not ready to return to the team just yet.

If the Pelicans want to win the Play-In Tournament, they’ll have to contain Paul George on defense and not let any other role players from the Clippers get hot like Reggie Jackson, Marcus Morris, or Terance Mann.

In the first round of the Play-In Tournament, the Clippers blew a lead in the second half against the Timberwolves even though Karl-Anthony Towns fouled out. Ty Lue and the Clippers know they’ll have to do a much better job on defense if they want to prevent the Pelicans from pulling off a similar second half counterattack.

“We just didn’t execute great down the stretch,” said Lue.

Paul George (24.3 ppg) will always get his shots, but the Clippers needed someone else to alleviate the scoring load in crunch time. Norman Powell (21.4 ppg) knows he needs to be more decisive on offense.

“Nine shots for a guy they look to to generate offense and things is not enough,” said Powell. “I just got to attack the paint, make those guys commit to their rotation, make them play out of that. That’s the biggest thing. Just being more aggressive.”

In the loss to the T-Wolves, George led the Clippers with 34 points on 10-for-24 shooting. He started the game ice cold with a 3-for-13 clip, before he caught fire late in the game and knocked down seven out of his final 11 shots. But, it was too little and too late, which resulted in a five-point loss.

“We got one game to get into the playoffs and we’ll be ready,” said George.

On Friday night, the Clippers have to keep McCollum in check and not let Valanciunas get hot from behind the arc. The big man from New Orleans torched them for 12-of-17 shooting from 3-point range in two losses, but the Clippers held Valanciunas to zero made treys in their last meeting.