With several teams on the NBA playoff bubble, this weekend has postseason vibes with multiple must-win games. The struggling Los Angeles Lakers head to New Orleans on Sunday to battle the Pelicans in a fierce bubble fight in the Western Conference. The Brooklyn Nets and Charlotte Hornets are jockeying for positions in the Eastern Conference play-in tournament. Kyrie Irving can finally play in home games after New York City changed their health mandate for unvaccinated players, and he can suit up in Brooklyn for the first time this season. 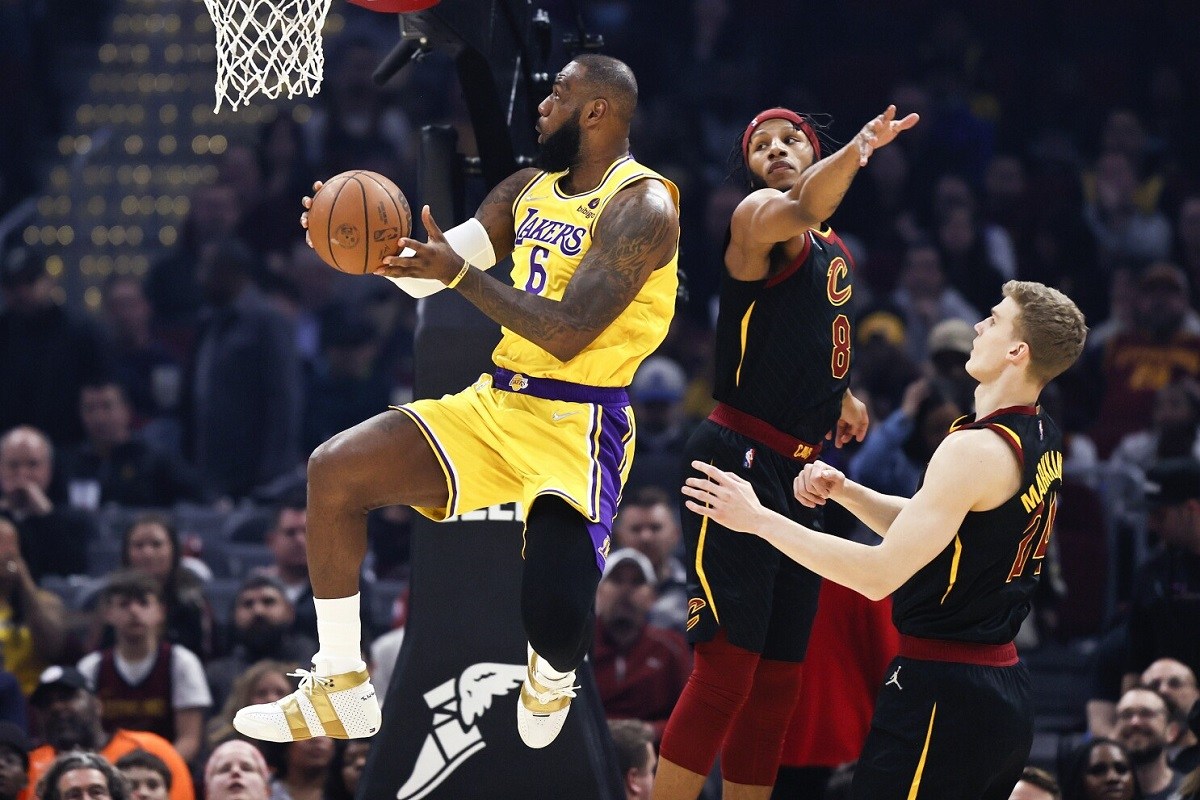 LeBron James from the LA Lakers drives to the hoop against the Cleveland Cavs. (Image: Louis Hugh/Getty)

When compiling these weekly NBA weekend previews, the best games are typically slated for Friday night or on Saturday. However, this weekend’s Sunday schedule is stacked with exciting matchups with serious playoff implications. The top four teams in the Eastern Conference are separated by just 1.5 games in their four-way royal rumble to obtain the coveted #1 seed.

With March Madness playing down from the Sweet 16 to the Elite 8, there’s a lot of basketball action to keep you entertained this weekend, so buckle up.

Utah Jazz (45-28) at Charlotte Hornets (37-36)… The Hornets are playing their best ball of the season with seven wins in their last 10 games, but they have two big games this weekend against the Jazz and the Nets. The Jazz are in the middle of a six-game road trip, but dropped two in a row so their #4 seed in the Western Conference is in jeopardy with the #5 Dallas Mavericks seeking to swap spots in order to host the Jazz in the first round of the playoffs. In those #4 vs #5 playoff matchups, home-court advantage means everything.

Dallas Mavericks (45-28) at Minnesota Timberwolves (42-32)… Karl-Anthony Towns and the Timberwolves host a red-hot Luka Doncic and the Mavs. Towns averages 24.7 points and 9.9 rebounds per game. His PER rating of 24.66 is ranked #8 in the league. Doncic missed the previous game with a sprained ankle and he’ll be a game-time decision. Without Doncic, the T-Wolves still have to deal with Jalen Brunson and Spencer Dinwiddie after they traded away the Unicorn. The Mavs are 41-31-1 ATS this season and tied for the third-best betting record in the NBA.

Philadelphia 76ers (45-27) at LA Clippers (36-38)… James Harden returned to his hometown of LA for a couple of days of work and late-night hijinks. The 76ers beat the Lakers without LeBron James (knee) on Wednesday, and the 76ers can sweep both LA teams if they can hold off the Clippers. The Clippers are desperate to get off the schneid after losing four games in a row.

Chicago Bulls (42-31) at Cleveland Cavs (41-32)… The Bulls sit in the #5 seed in the Eastern Conference, but the #6 seed Cavs trail them by just one game. To complicate matters, the Toronto Raptors (41-32) have the same record as the Cavs, yet hold down the #7 seed. Those three teams are in a tight race and looking to avoid the #7 seed and the play-in tournament. The Bulls struggled in March with a 3-8 clip and are on a mission to finish their tumultuous month on a positive note.

Brooklyn Nets (38-35) at Miami Heat (47-26)… There’s a chance that the Nets and Heat meet in the first round of the Eastern Conference playoffs if the Heat can lock up the #1 seed and if the Nets win the play-in tournament. The Heat dropped two in a row. They allowed the chase pack to close in on them and, potentially, snatch the top playoff seed and home-court advantage.

Milwaukee Bucks (46-27) at Memphis Grizzlies (51-23)… Ja Morant is out for the next two weeks, so the rest of the Grizzlies have to hold the line while he rests his knee for the playoffs. The Grizzlies boast the best betting record in the NBA at 48-26 ATS, but we’ll see if they can cover without the almighty Ja. Meanwhile, Giannis “Greek Freak” Antetokounmpo and the Bucks smell blood in the water after the Heat went on a mini-skid. The Bucks are just one game out of first place and well within reach of the #1 seed in the East.

Minnesota Timberwolves (42-32) at Boston Celtics (46-28)… The Celtics are the hottest team in the NBA right now with a five-game winning streak. Jayson Tatum has been the hottest player in the league in March, averaging 33.6 ppg and shooting a sizzling 46.7% from 3-point range. Tatum versus Towns will be fun to watch.

Philadelphia 76ers (45-27) at Phoenix Suns (60-14)… Get ready for the biggest NBA game of the weekend with the 76ers and the Suns. The 76ers sojourn out West continues with a Sunday tilt in Arizona. The Suns have the best record in the NBA as the first team to reach 60 wins. They recently got Chris Paul back in the lineup, but his playing time is limited after missing a couple of weeks with a fractured thumb.

LA Lakers (31-42) at New Orleans Pelicans (31-42)… The Lakers currently sit in the #10 seed even though they have the same record as the Pelicans, who hold the #9 seed. Both teams keep looking over their shoulders because Pops and the San Antonio Spurs (29-24) are on the bubble and are only two games out.

Charlotte Hornets (37-36) at Brooklyn Nets (38-35)… Kyrie Irving got a huge break when NYC’s mayor ended the indoor health mandate, which previously prohibited unvaccinated pro athletes from playing in home games even though unvaxxed visiting players could play. Sunday’s game against the Hornets will mark the first time this season that Irving suits up for the Nets on Brooklyn’s home court. The Nets play consecutive games this weekend, but they have the second-worst back-to-back betting record in the NBA at 3-8-1 ATS in those B2B spots.