The shirt worn by Diego Maradona in the match against England at the 1986 World Cup is up for sale. Auctioneer Sotheby’s says the jersey could end up costing more than $5.2 million. The auction opens on 20 April. 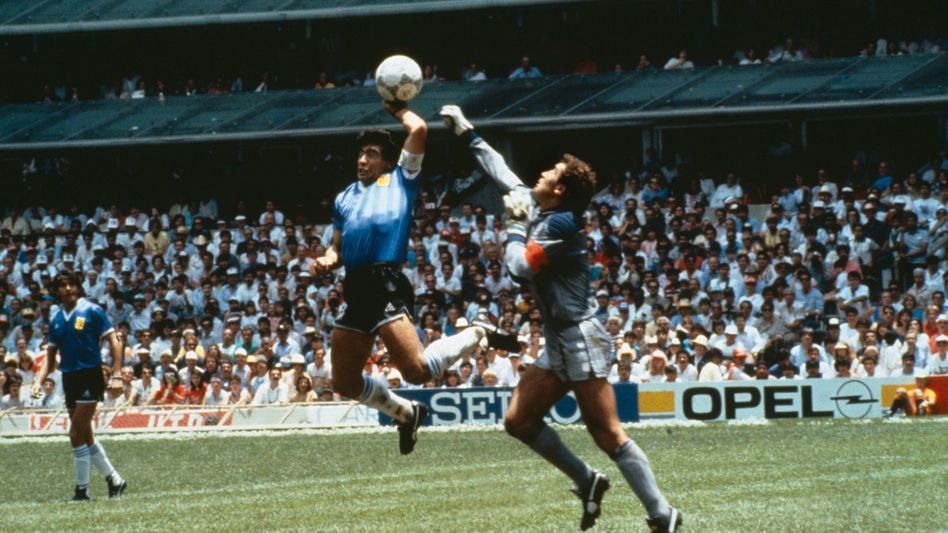 Maradona’s highly controversial goal against England at the 1986 World Cup is still regarded as one of the most important moments in the history of football. (Image: spiegel.de)

Brahm Wachter, the head of streetwear and modern collectibles at Sotheby’s, described the shirt as being “on a small list of the most important sports memorabilia items in the world”. Wachter said he will “never get to handle anything this good again”. He regards Maradona’s illegal goal, which finally stood after not being spotted by any of the match officials, as an “iconic moment in the history of sports”.

What happened to the shirt after the game?

In the World Cup quarter-final clash in Mexico City, Maradona scored both Argentina’s goals in a dramatic 2-1 win in front of England. Diego’s first was ruled a header, despite the ball clearly touching his fist before bouncing into the net.

The Argentine star’s second goal won global acclaim. Maradona dribbled past opponents before beating English goalkeeper Peter Shilton to put Argentina through. Maradona’s unstoppable sprint towards goal followed by his neat finish was voted goal of the century in a FIFA poll in 2002.

After the match, Maradona swapped shirts with Steve Hodge. The former England midfielder kept it and the shirt was loaned to England’s National Football Museum in Manchester until now. Hodge decided to cash out, saying he felt “that the time is just right” to sell.

Could Maradona set a new record?

Maradona died in November 2020, just days after going through brain surgery. He was 60.

When sold, his shirt from the Argentina vs England match in 1986 could beat a record for a piece of sportswear. At the moment, Babe Ruth’s New York Yankees jersey sets the record at $5.64 million. The manifesto that launched the modern Olympic movement keeps being the most expensive sports item ever bought at $8.8 million. Maradona’s shirt will be on display at Sotheby’s showroom in London from 20 April to 4 May.

Ahead of the tournament, they were going to win in 1986, Argentina was second-favorites to triumph in the eyes of the bookies, only behind South-American arch-rivals Brazil at +200. But Argentina was ahead of Uruguay at +500 and host-nation Mexico at +900.