The NBA Playoffs have not even begun yet, and there’s already big drama brewing down in the Big D. Luka Doncic from the Dallas Mavs suffered a left calf strain injury in the final game of the season on Sunday, and he’s expected to miss Game 1 of the opening round of the NBA Playoffs between the #4 Dallas Mavs and #5 Utah Jazz. 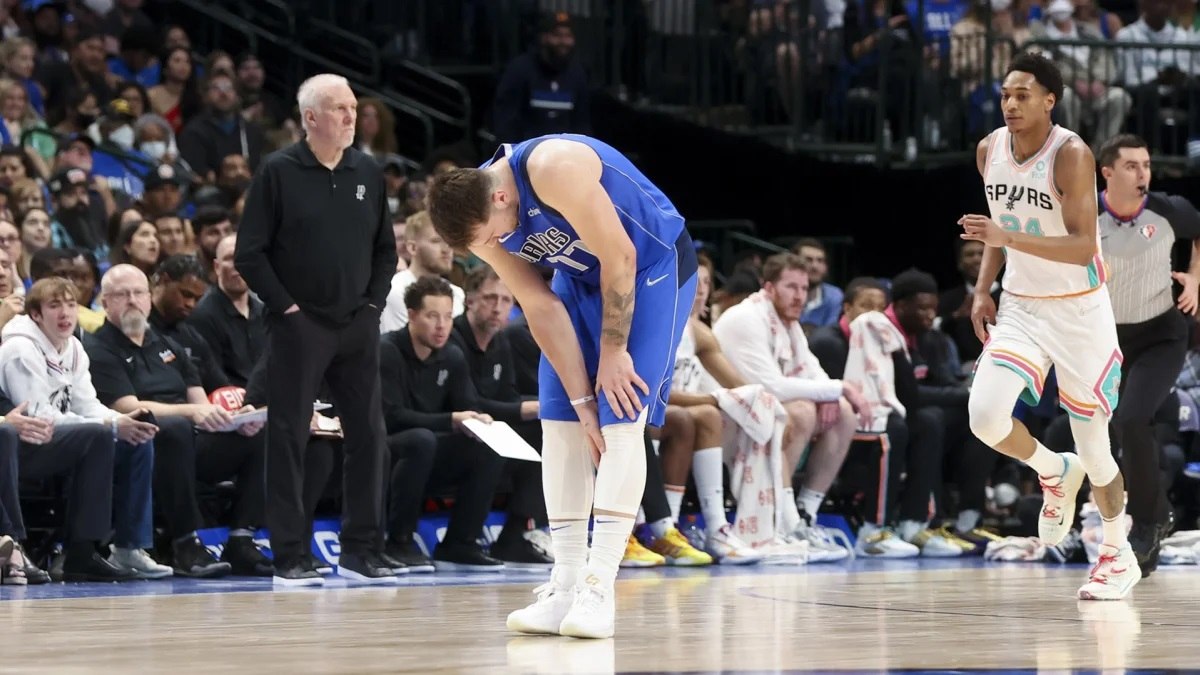 Luka Doncic from the Dallas Mavs clutches his left calf after he suffered an injury against the San Antonio Spurs in the final game of the regular season. (Image: USA Today Sports)

The first round of the 2022 NBA Playoffs tips off on Saturday, and the Mavs will play Game 1 without their All-Star point guard.

The Mavs have been keeping the severity of Doncic’s calf strain somewhat of a secret. He underwent an MRI earlier in the week which confirmed a calf strain, but the Mavs did not elaborate other than calling it a “mild strain.” Doncic did not practice this week, but Shams Charania from The Athletic broke the news that Doncic will miss Game 1 in Dallas on Saturday.

“Luka Doncic would love to play Saturday, he’d love to play in Games 1 and 2 in this series,” said Charania. “It’s unfortunate timing wise. As of right now, we’ll see as this series goes on.”

Other reports suggest Doncic has a worse injury that the Mavs let on, and he could also miss Game 2.

Without Doncic in the starting lineup, the Mavs are now a +5 home dog in Game 1. The Mavs also saw their series odds flip flop with the Jazz. The Jazz are the favorite to advance to the Western Conference Semifinals at -300 odds, whereas the Mavs are the underdog now at +230 odds to win the series.

Team often sit their star players in the last week of the season to avoid a major injury prior to the playoffs. However, in the case of the Dallas Mavs, they had a chance to wrestle away the #3 seed from the Golden State Warriors in the Western Conference playoffs. That’s why Doncic suited up for the final game of the season on Sunday against the San Antonio Spurs.

Doncic suffered the injury in the third quarter when he grabbed his left leg. He exited the game and the Mavs still held on to the victory. Despite playing only 29 minutes, he missed a triple-double with 26 points, eight rebounds, and nine assists.

The Warriors also won on Sunday to hold on to the #3 seed, so the Mavs were awarded the #4 seed.

The NBA league office reviewed the incident and determined he was not warranted a technical foul so they rescinded the tech. With just 15 technical fouls for Doncic on the official record, he was eligible to play the season finale against the Spurs. In an odd twist of fate, if the tech held up, then Doncic would’ve sat out the final game and avoided the calf strain and subsequent injury.

Next Man Up: Spencer Dinwiddie

Doncic led the Mavs with 28.4 points, 8.1 rebounds, and 8.7 assists this season. He was the NBA’s third-best scorer and fifth-best assist man. His PER rating of 25.13 was ranked #5 in the NBA. The Mavs will need all hands on deck to help fill in for Doncic.

The Mavs traded the Unicorn at the trade deadline, but they got back Spencer Dinwiddie from the Washington Wizards in exchange for Kristaps Porzingis. In his short time with the Mavs, Dinwiddie looked good. He averaged 15.8 points and 3.9 assist per game as the Sixth Man. He appeared in 23 games and started seven since the trade from the Wizards. He’s the backup point guard, so he’ll get tapped by head coach Jason Kidd to start in Game 1. The Mavs are fortunate they have Dinwiddie as Doncic’s backup. He’s talented enough to be a starter for the majority of teams in the league, but Doncic is so good that Dinwiddie has to come off the bench.

Without Porzingis on the Mavs, Jalen Brunson picked up the scoring slack after the trade deadline. Brunson finished the season as the Mavs’ second-best scorer averaging 16.3 points and 4.8 assists per game.

The Mavs hope that Brunson and Dinwiddie can help them hold the line until Doncic is ready to return to action.