Teams do not want to do any favors for LeBron James and the Los Angeles Lakers, which is why any potential trade partner involving Russell Westbrook will want to tax the Lakers by requesting at least one first-round draft pick to complete the trade. 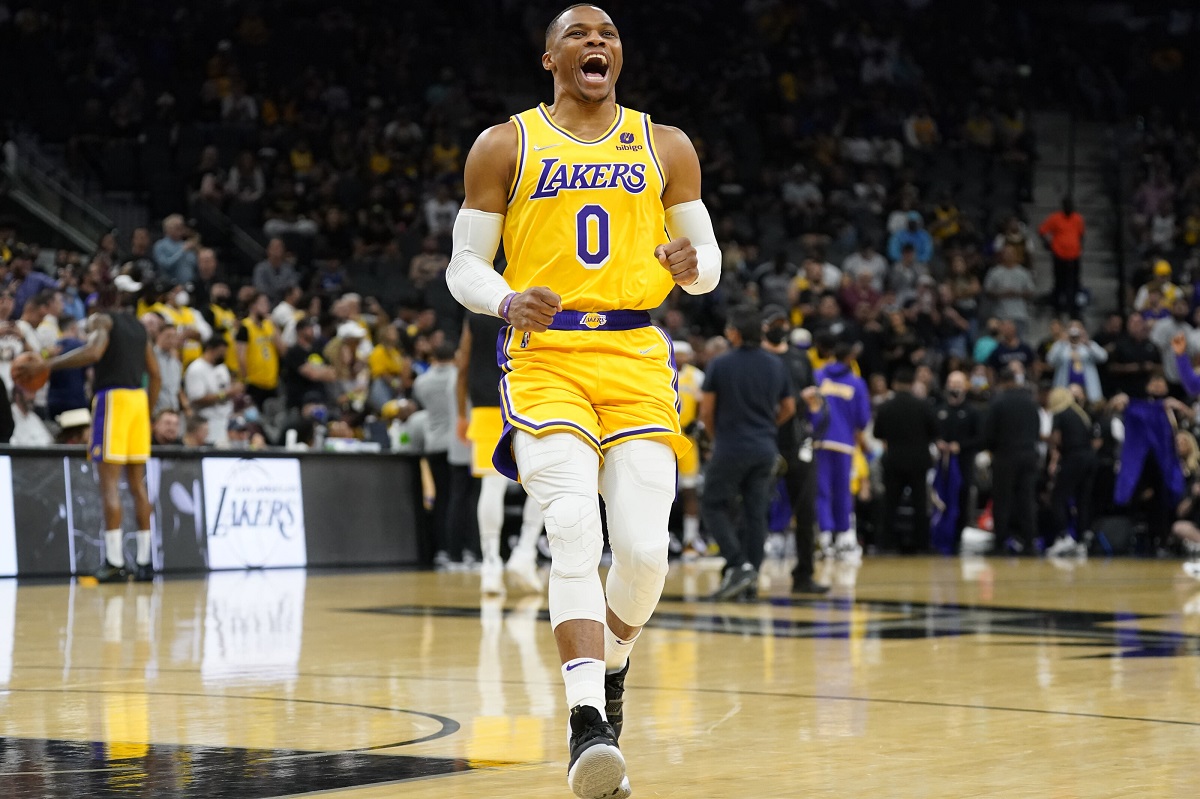 The Lakers have a huge headache on their hands trying to figure out what to do with Russell Westbrook this offseason. (Image: Scott Wachter/USA Today Sports)

The Lakers do not want to pay that so-called tax just to dump Westbrook. So, it looks like they’ll have to start the season with him and wait until the trade deadline to dump him at a more agreeable price. Or, they can run it back next season and hope the new head coach can win with Westbrook in the lineup alongside LeBron and Anthony Davis.

Westbrook averaged 18.5 points, 7.4 rebounds, and 7.1 assists per game. The durable Westbrook appeared in 78 games this season, compared to 40 from Davis and 56 for LeBron.

The Big 3 for the Lakers appeared in only 21 games together due to injuries, or exactly a quarter of the season. Lakers were 10-11 in those Big 3 games.

There were 52 games in which Westbrook played a game with either LeBron or Davis, and the Lakers were just 20-32.

Westbrook played five games when LeBron and Davis were both out, and the Lakers were 0-5 in that situation.

Mostly everyone who follows the NBA thought the initial trade with the Washington Wizards was bonkers. The Lakers were the only ones who thought it was a great idea. Reality sunk in early in the season when Westbrook did not gel with LeBron and Davis. The Lakers were one of the preseasons favorites to win the championship, but they were barely a .500 team in the first quarter of the season.

Davis suffered a MCL injury and he missed a month of action, yet the Lakers continued to tread water. Davis didn’t last 10 games before he suffered a gnarly sprained ankle prior to the All-Star Break. At that point, the Lakers were 27-31 and their season going off the rails after they failed to deal Westbrook in a trade. General manager Rob Pelinka could not find a trade partner that didn’t want to take the Lakers behind the shed. A pissed-off LeBron wanted Westbrook out at all costs, but Pelinka did not have the draft capital or role players worthy for a trade.

After the break, the Lakers went 2-9 and were on the postseason bubble. They lost eight games in a row in late March and early April to fall 18 games under .500. A last-gasp effort to qualify for the Play-In Tournament fizzled out. The Lakers finished the season 33-49 and 31 games out of first place. Out of 15 teams in the west, the Lakers finished in eleventh place and ahead of a quartet of tanking teams: Sacramento Kings, Portland Trail Blazers, Oklahoma City Thunder, and Houston Rockets.

Frank Vogel won a title with the Lakers in 2020, but the team fired him at the end of a disastrous season. Vogel became the obvious scapegoat, which bothered a lot of head coaches. It’s a brotherhood and fraternity, and many coaches were livid about how the Lakers treated Vogel. Quin Snyder had been linked to become the next Lakers head coach because the Utah Jazz were in the middle of their own internal mess. Snyder and Vogel were close, but he withdrew his name from consideration.

Westbrook and Vogel clashed in the preseason, which was an immediate red flag that the team was doomed. Vogel wanted whomever grabbed the rebound to bring the ball up the court, but Westbrook demanded that he brought the ball up as the point guard.

The next head coach inherits a shitstorm involving Westbrook. Coaching the Lakers is not an easy task, and only a select few like Pat Riley and Phil Jackson truly succeeded. The Lakers job used to be one of the best positions in all pro sports. These days, it’s more like working at the circus, or a puppet show. If you believe all the rumors that LeBron is really the shadow general manager – hence the ‘LeGM’ nickname he earned in Cleveland – then the next head coach of the Lakers will be nothing more than LeBron’s puppet.

The Lakers defense took a huge hit when they added Westbrook. When he’s healthy, Davis is considered one of the best two-way big men in the game. LeBron’s defense was the first thing that began to slip as he entered his mid-30s. With LeBron eying a potential scoring title, he exerted his energy on offense while catting around on defense.

The Lakers defense was Swiss cheese all season between Westbrook’s lackluster defensive prowess, aging LeBron, and banged-up Davis. The team allowed 115.1 points per game, for the third-worst defense in the NBA. Only the Kings and Rockets were worse.

Westbrook shot just 66.7% from the charity stripe this season. He shot 80% from the line in his 11 seasons with the Thunder, but he missed a third of his free throws with the Lakers.

When Westbrook complained about hearing the Westbrick chants, he just made the situation even worse. Toward the end of the season, there were numerous cringe-worthy moments when Westbrook had verbal spats with the local media. The pressure got to Westbrook and his struggles intensified.

This is precisely why other NBA teams would love to impose a first-round draft pick tax on any trade involving Westbrook.

In case you were wondering, the Lakers are +2200 odds to win the 2023 NBA championship. Yet, if you really think about it, the Lakers might not even be in the top six teams in the Western Conference next season.