Kevin Durant requested a trade with the Brooklyn Nets and all hell broke loose, but the bookies at DraftKings posted a cool prop bet where you can wager on Durant’s next team with the Phoenix Suns the betting favorite at -125 odds, and the Toronto Raptors are a popular pick at +250. 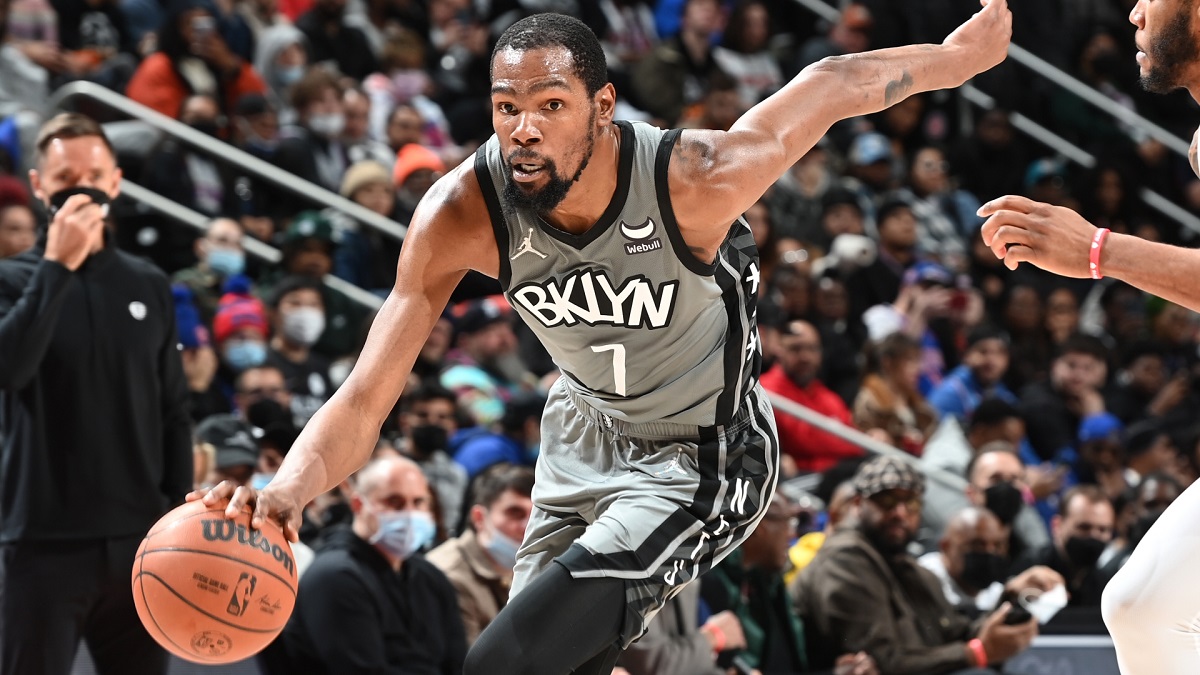 Kevin Durant from the Brooklyn Nets drives the lane against the Detroit Pistons at Barclay’s Center. (Image: Getty)

The Brooklyn Nets are actually the third-favorite on the betting board at +700 to retain Durant’s services at the start of the season.

Meanwhile, the Miami Heat and Golden State Warriors round out the top five potential trade destinations, and they’re both +1400 odds to become the next team for Durant.

When news broke about the Earth-shattering trade talk involving Durant, his camp hinted that the Phoenix Suns and Miami Heat were at the top of his wish list. Both teams saw an instant bump in their championship odds with the Suns rocketing toward the top of the futures board at +600 odds.

The Suns would have to give up a couple of key role players — Cam Johnson and/or Jae Crowder — in addition to a Deandre Ayton sign-and-trade. But will they have enough of a starting five or bench remaining to make a legit title run in the west?

This wager specifically covers the first playing minute of the season for Durant, which could be the Nets if they want to hold out for a better price which could be until after the season begins. Remember a couple seasons ago when James Harden wanted out of the Houston Rockets but they waited until January to pull off a blockbuster four-team trade with the Brooklyn Nets? You can back the Nets as a sly pick at +700 odds as the next team for Durant. Let’s not forget, the Nets are also shopping Kyrie Irving so there’s a chance that deal happens before Durant’s trade.

The Toronto Raptors emerged as the second-best contender to secure Durant in a trade. On paper, the Raptors have the easiest route to make a Durant trade happen with the Nets. They have the perfect combination of young and upcoming players along with draft capital, and there’s no major financial hoops that the Raptors have to navigate to make a deal. Although the Suns and Heat were at the top of the Durant’s wish list, Durant also said he’d like to play for Nick Nurse and the Raptors.

Pat Riley and the Miami Heat would love to arrange a dynamic duo involving Durant and Jimmy Butler. However, the Heat have too many hurdles to make any trade for Durant a reality, which is why they’re only +1400 odds as his next team. The Heat need another star to help out Butler in the postseason and put them over the hump, but they do not have the right players on the roster to entice the Nets.

The Golden State Warriors won the 2022 NBA title without Durant this season, yet they’re +1400 odds and in the top five on the board to secure him in a trade. Durant has a well-known affinity for marijuana and northern California grows some of the dankest bud on the planet, but I’d wager all the weed in Humboldt County that there’s no chance Durant returns to his old team.

The Portland Trail Blazers are +2000 odds to add Durant in a trade. The Trail Blazers are rebuilding a new squad around Damian Lillard, and Durant would be a perfect fit. Dame and KD in Rip City would make the Blazers must-see TV.

The Chicago Bulls are shopping big man Nikola Vucevic in a trade, but they could also dangle Zach LaVine and Coby White to entice the Nets to send Durant to the Windy City. KD and DDR would make a powerful one-two punch, which is why the Bulls are +2000 odds to add Durant in a trade with the Nets.

The New Orleans Pelicans signed Zion Williamson to a contract extension with an escalator clause because he missed significantly more time due to injuries than he actually played. However, the Nets could usurp the New York Knicks once again by securing Zion and multiple picks in a trade from the Pelicans. Zion said he’d love to play for the Knicks some day, which fueled the “Zion to Gotham” rumors over the last year. The Pelicans are +2200 odds to pull off a huge coup to land Durant in a trade with the Nets.

We love Ja Morant and who knows how far the Memphis Grizzlies could have gone this postseason if Morant did not suffer a knee injury against the Golden State Warriors in the Western Conference semifinals. The Grizzlies are loaded with young players and budding stars to make a trade worth while for the Nets, but Durant is +3000 odds to join the Griz next season.

The Dallas Mavs let Jalen Brunson walk in free agency, but they need a legit All-Star to pair with Luka Doncic if they expect to replicate last season’s run in the postseason. A player like Durant would make the Mavs a legit title contender, but they’re +3500 odds to make a trade with the Nets a reality.

Durant in Hollywood? Save your money. The LA Clippers are about to get Kawhi Leonard back in the lineup after missing all of last season recovering from an ACL injury.

The Lakers are the betting favorite to become the next team that Kyrie Irving plays for next season. Durant to the Lakers at +3000 odds is one of those silly bets that deep-pocketed Lakers’ fans make to boost self-esteem after feeling a little off-kilter after chugging a kale smoothie.

The Nets already made one huge trade with the Philadelphia 76ers last February when they swapped unhappy players — James Harden and Ben Simmons — and the 76ers do not have the trade capital to make another deal with the Nets.

The Boston Celtics were the runner-up this year, but they added Malcolm Brogdon in a trade with the Indiana Pacers to bolster their bench. They coughed up a first-rounder to make that happen, but adding Durant would have to include leveraging their future and splitting up the “Jays” by saying goodbye to Jaylen Brown in order to add Durant.

The Utah Jazz are stocked with top draft picks after the Minnesota Timberwolves overpaid to acquire Rudy Gobert in a trade. Durant with Donovan Mitchell would make a great combo, but don’t waste your money because the KD and Spida Show will not come to fruition.

The Denver Nuggets have the two-time reigning MVP with Nikola Jokic, and Jamal Murray and Michael Porter Jr. are ready to return to the lineup after missing last season. They upgraded their defense by adding Kentavious Caldwell-Pope to the team, but would they make a pitch to the Nets to bring Durant to Colorado? The Mile High City has championship fever after the Colorado Avalanche won the Stanley Cup, so the Nuggets could feel the pressure to make an insane trade to bring in Durant. It’s far-fetched at +4500 odds because the Nets would be foolish to take a flier on MPJ’s health.

Durant was not shy when he said he hated the Knicks. He wasn’t trashing the fans, coaching staff, or the players per se, but he was not shy about his ire for owner James Dolan. The Knicks stockpiled multiple first-rounders to make a run at Donovan Mitchell, but the Jazz said they’re not interested in trading away Spida. They would also love to ditch Julius Randle, plus they also have several young stars ready to bust out like Obi Toppin. The Knicks are +5500 odds to add Durant in a trade with the Nets, but those odds should be higher considering KD has zero love for the universally-loathed Dolan and the Knicks.

Kevin Durant began his career with the Seattle Sonics before the team relocated to Oklahoma City and became the OKC Thunder. If Durant is feeling nostalgic, he’d agree to a trade with the Thunder. They’re loaded with future stars and have plenty of draft picks in reserve to make a trade happen. Yet, the Thunder are long shots on the board at +6000 odds to pull off a trade for Durant.