The Denver Nuggets and Washington Wizards worked out a trade where the Wizards sent guards Kentavious Caldwell-Pope and Ish Smith to the Nuggets in exchange for swingman Will Barton and point guard Monte Morris. 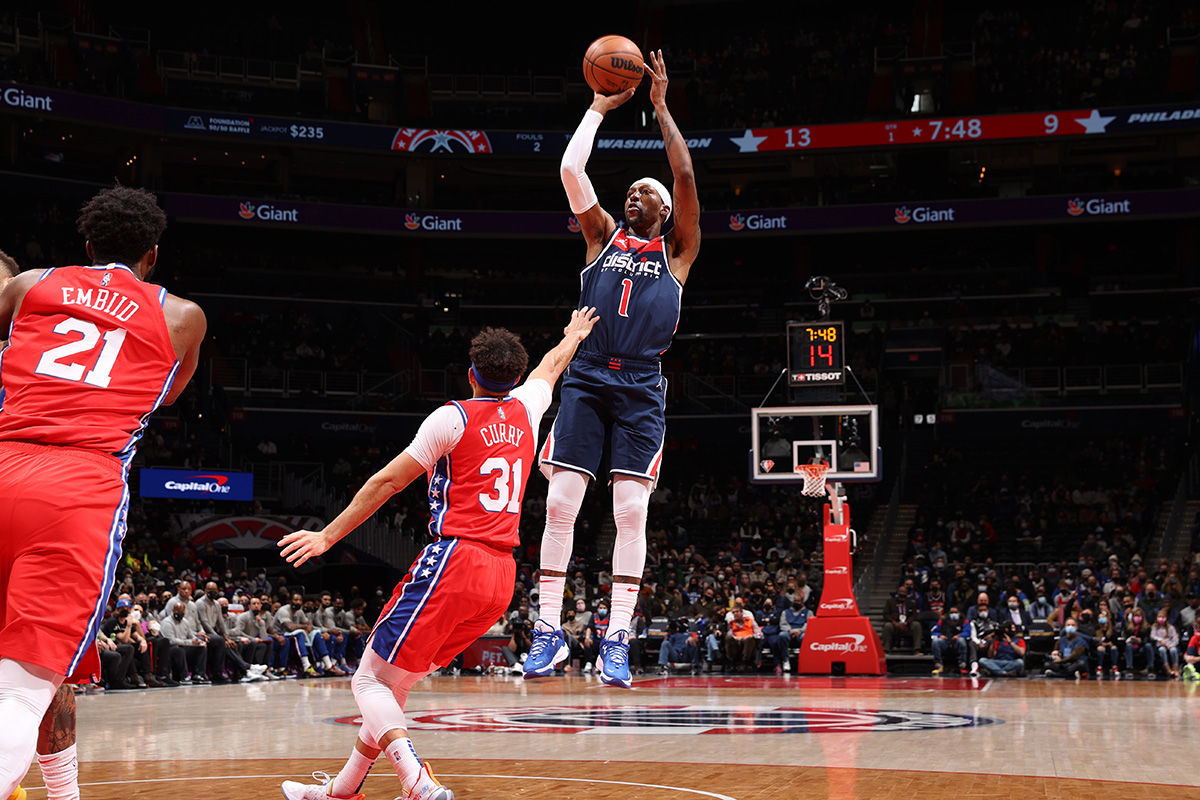 Kentavious Caldwell-Pope from the Washington Wizards pulls up for a jump shot against the Philadelphia 76ers. (Image: Steph Goslin/Getty)

The Wizards acquire two players with expiring contracts from the Nuggets in this trade, but both Barton and Morris should join their starting five. Meanwhile, the Nuggets upgraded their defense with Caldwell-Pope, who’s also a strong spot-up shooter.

The Nuggets finished last season with a 48-34 record, and secured the #6 seed in the Western Conference playoffs. They lasted just five games before the #3 Golden State Warriors knocked them out of the first round.

The Wizards were 35-47 last season and finished in twelfth place in the Eastern Conference and missed a shot at the Play-In Tournament.

The Nuggets are +1500 odds to win the 2023 NBA championship, according to a recent update from DraftKings. The Wizards are +35000 odds as one of the long shots on the futures board to win the title.

The Nuggets have championship aspirations with Nikola Jokic, who won the MVP the last two seasons. Jokic carried the Nuggets last season without Jamal Murray and Michael Porter. Jr. Murray suffered an ACL injury late in the 2020-21 season, and missed all of last season. Porter played only a few games last season before an old back injury came back to haunt him. Porter underwent back surgery and he’s expected to make a full recovery.

Caldwell-Pope joins Murray in the backcourt, which will be fun to watch. He averaged 13.2 points, 3.4 rebounds, and 1.9 assists in 77 starts with the Wizards last season. Caldwell-Pope won a title with the LA Lakers in 2020, so the Nuggets added a veteran with championship pedigree. In 683 career games, Caldwell-Pope started in 541 of them including 190 with the Lakers. He developed into a reliable sniper who knocked down 41% of his treys during the Lakers’ title run in 2020. Last season, he connected on 39% of his treys.

The Nuggets intend to keep Ish Smith instead of waiving him. If that’s the case, the Nuggets will be the 13th team for the journeyman backup point guard. That would set a new NBA record for most teams in a career. Smith began his career with the Houston Rockets in 2010, but also played for the Memphis Grizzlies, Golden State Warriors, Orlando Magic, Milwaukee Bucks. Phoenix Suns, Oklahoma City Thunder, Philadelphia 76ers (twice), New Orleans Pelicans, Detroit Pistons, Charlotte Hornets, and the Washington Wizards (twice).

Smith began last season with the Charlotte Hornets, before they traded him to the Wizards. He averaged 8.6 points and 5.2 assists per game in 28 games off the bench for the Wizards.

With Murray returning to the Nuggets starting lineup and rookie Bones Hyland making big strides, it made sense that they decided to trade Morris. The Denver Post reported that no less than 20 teams called the Nuggets inquiring about Morris since they were stocked with three point guards. The Wizards were one of the teams seeking a trade for Morris, who averaged a career-best 12.9 points, 4.4 assists, and 3.0 rebounds in 75 games with the Nuggets last season.

The Wizards drafted Johnny Davis from Wisconsin with the #10 pick in the draft, but the rookie is now expected to back up Morris after the trade. If Bradley Beal stays with the Wizards, he’ll be paired up with Morris in the backcourt.

Barton should slide into the Wizards starting lineup at small forward, with Israel’s Deni Avdija backing him up. Barton’s defense with Denver was average at best, but he was prone to injuries during his tenure with the Nuggets. He appeared in 71 games with the Nuggets last season while averaging 14.7 ppg, but he missed 70 games in the three previous seasons due to numerous injuries.

If Beal stays with the Wizards, they’ll have a decent starting five that includes Beal, Morris, Barton, Kyle Kuzma, and Kristaps Porzingis. The Wizards also have a couple young former players from Gonzaga coming off the bench with Rui Hachimura and Corey Kispert.