Both #1 seeds entered Friday night with a 2-0 series lead and missed a ripe opportunity to seize a 3-0 lead when the Miami Heat and Phoenix Suns lost their respective Game 3 matchups. Joel Embiid returned to the Philadelphia 76ers and led his squad to a 99-78 blowout victory against the Heat, and Luka Doncic finally got some help from his teammates and the Dallas Mavs defeated the Phoenix Suns 103-94. 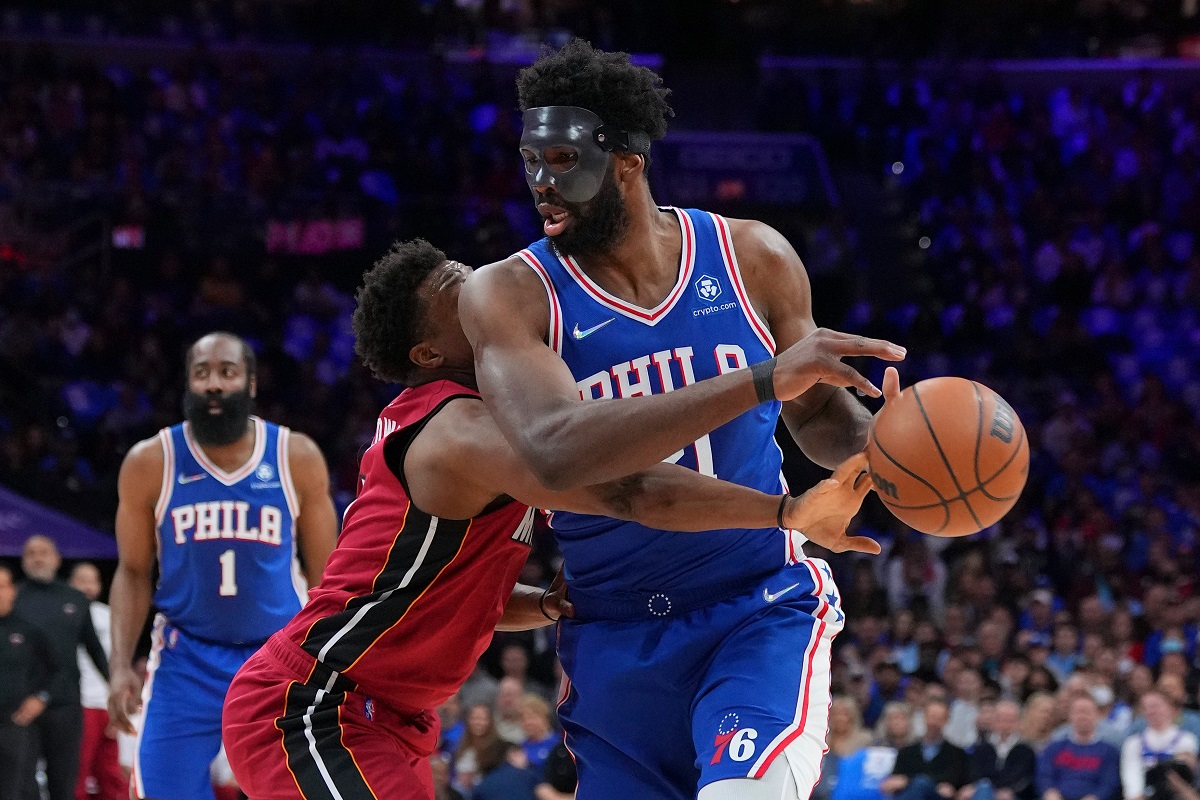 Joel Embiid, who missed two games with an orbital fracture and concussion, wore a face mask during a Game 3 victory for the Philadelphia 76ers over the Miami Heat at Wells Fargo Center. (Image: Mitchell Leff/Getty)

The top-seeded Heat and Suns still lead 2-1 with Game 4 slated for Sunday.

The Suns are -525 odds to knock out the Mavs and advance to the Western Conference Finals. The Mavs are +400 odds to pull off a comeback and win the second-round series.

The Heat are -330 odds to win their series and advance to the Eastern Conference Finals, while the 76ers are +260 odds as an underdog to rally from behind and win the series.

After missing the first two games in Miami, Embiid cleared concussion protocol on Friday morning. Embiid sported a face mask and was a menacing presence in Game 3. He scored 18 points and added 11 rebounds in 36 minutes of action in the victory.

“I can only imagine how difficult it is,” said James Harden. “I’ve had a concussion before, so just to come off a concussion, and obviously his face is swollen, still got a hand problem. But it was game time. It was winning time. It’s the playoffs. Joel knew how much we needed him, and he delivered. His dominance on both ends of the ball is very important to this team, it’s very valuable to this team.”

The 76ers relied on their sharpshooters and coasted to a 20-point victory. Tyrese Maxey scored 21 points including 5-for-6 from 3-point range. Danny Green knocked down a career-best seven treys on 7-for-9 shooting for 21 points. Harden struggled from deep with a 1-for-7 clip, but he finished the night with 17 points, eight rebounds, and six assists.

Jimmy Butler scored 33 points in a losing effort. Tyler Herro was the only other player to reach double digits, but he scored just 14 points. Kyle Lowry appeared in his first game since injuring his hamstring in Game 2 in the first round. He scored zero points in 25 minutes of play and missed all four of his shots.

Heat big man Bam Adebayo averaged 25.5 ppg in the first two games of the series, but Embiid held him to just nine points on 2-for-9 shooting.

“Joel made a big impact,” said Heat head coach Erik Spoelstra. “This is what you have to expect. He’s an MVP-caliber player.”

In the first two losses, Luka Doncic outscored the other starters on the Mavs because no one else could find a bucket to save their lives. In Game 3, Jalen Brunson aggressively attacked the basket and scored a team-high 28 points in the victory.

“I found a way to bounce back tonight,” said Brunson. “I just can’t be satisfied with this. Sunday’s going to be another brutal game. I have to bring the same energy, the same intensity, the same everything.”

Four starters, plus Maxi Kleber off the bench, tallied double digits in Game 3 and the Mavs did not have to rely on Doncic to do all the heavy lifting.

Doncic missed a triple double with 26 points, 13 rebounds, and nine assists. Playing in front of their home crowd for the first time this series was an added energy booster.

“Energy, man,” said Doncic. “The crowd gets you going. The energy and the execution were better. That’s what we’ve got to do every game.”

The Suns looked flat against the Mavs from the opening tip. Chris Paul had a rough night with seven turnovers and just four assists. The Suns knew they were in trouble when Jae Crowder was their leading scorer. Crowder scored 19 points on 5-for-8 3-pount shooting. Devin Booker scored 18 points, but he could not find his groove.

“It wasn’t like us,” Booker said. “You can credit them. They came out played hard, played desperate. That’s that. We’ve got a series.”