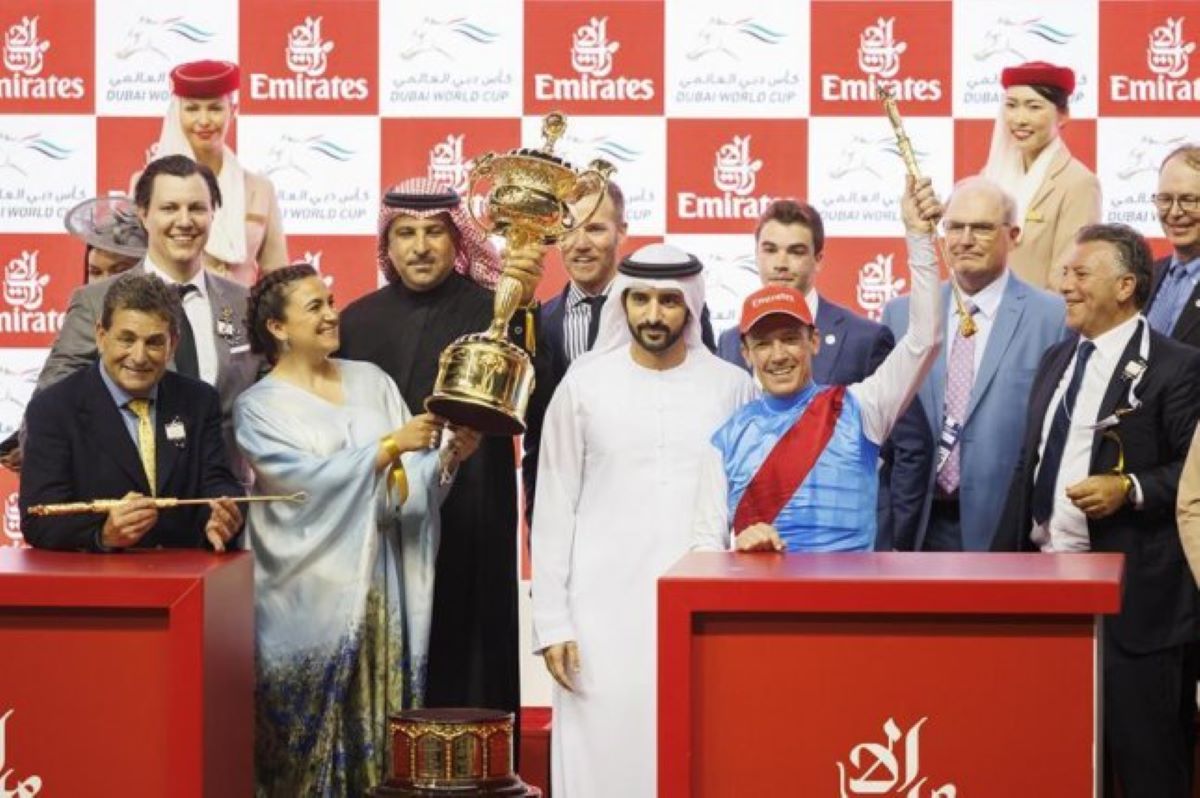 That takes a small chunk out of the $750,000 Dettori won for piloting the Bob Baffert-trained 5-year-old to victory. Co-owned by Amr Zedan of Zedan Racing and WinStar Farm, Country Grammer won $7.5 million out of the $12 million purse. Dettori received 10% of that.

Dettori won his record-tying fourth Dubai World Cup with a masterful ride, surging up the track in deep stretch to pass 2/5 favorite Life Is Good. He turned aside an inside charge by runner-up Hot Rod Charlie and third-place Chuwa Wizard. That brought Dettori and Country Grammer a 1 ¾-length victory in the world’s second-richest race.

🗣 “I’m winning the Dubai World Cup again at my age – fantastic.”@FrankieDettori on a fourth #DubaiWorldCup & a first at Meydan

During that rally, however, stewards determined Dettori used his whip 13 times on Country Grammer. According to Thoroughbred Racing Commentary, which first reported the story, that violated ERA (Emirates Racing Authority) Rule 69B(a), which covers excessively whipping a horse.

Dubai stewards had a busy evening

The ERA was busy coming out of Saturday’s Meydan Racecourse card. The country’s racing authority slapped fines on two other jockeys for crop violations: Patrick Dobbs and Yuga Kawada. Dobbs was fined $54 (AED 2,000) in the Dubai Kahuyla Classic for using his crop 13 times on Brraq. They finished fourth in that Group 1 Arabian race.

Dubai stewards fined Kawada $2,722 (AED 10,000) after he used his crop on Red Le Zele without giving his horse proper time to respond. They finished second in the Group 1 Dubai Golden Shaheen.

Further news coming out of Dubai involved Pinehurst, one of Baffert’s standout 3-year-olds. The international favorite for the Group 2 UAE Derby was pulled up during the race. Jockey Flavien Prat eased him to the wire. He finished last in the 14-horse field.

The stewards’ report quoted Prat saying that the colt “moved poorly throughout.” The report said lameness was detected. That means that a certificate of fitness signed by a veterinarian is required before Pinehurst can race again.