While eyes are on Tampa Bay Downs and its Kentucky Derby prep, Oaklawn Park offers up the juicy Grade 3 Azeri Stakes, starring an Eclipse Award winner and a mare who could eventually become one. 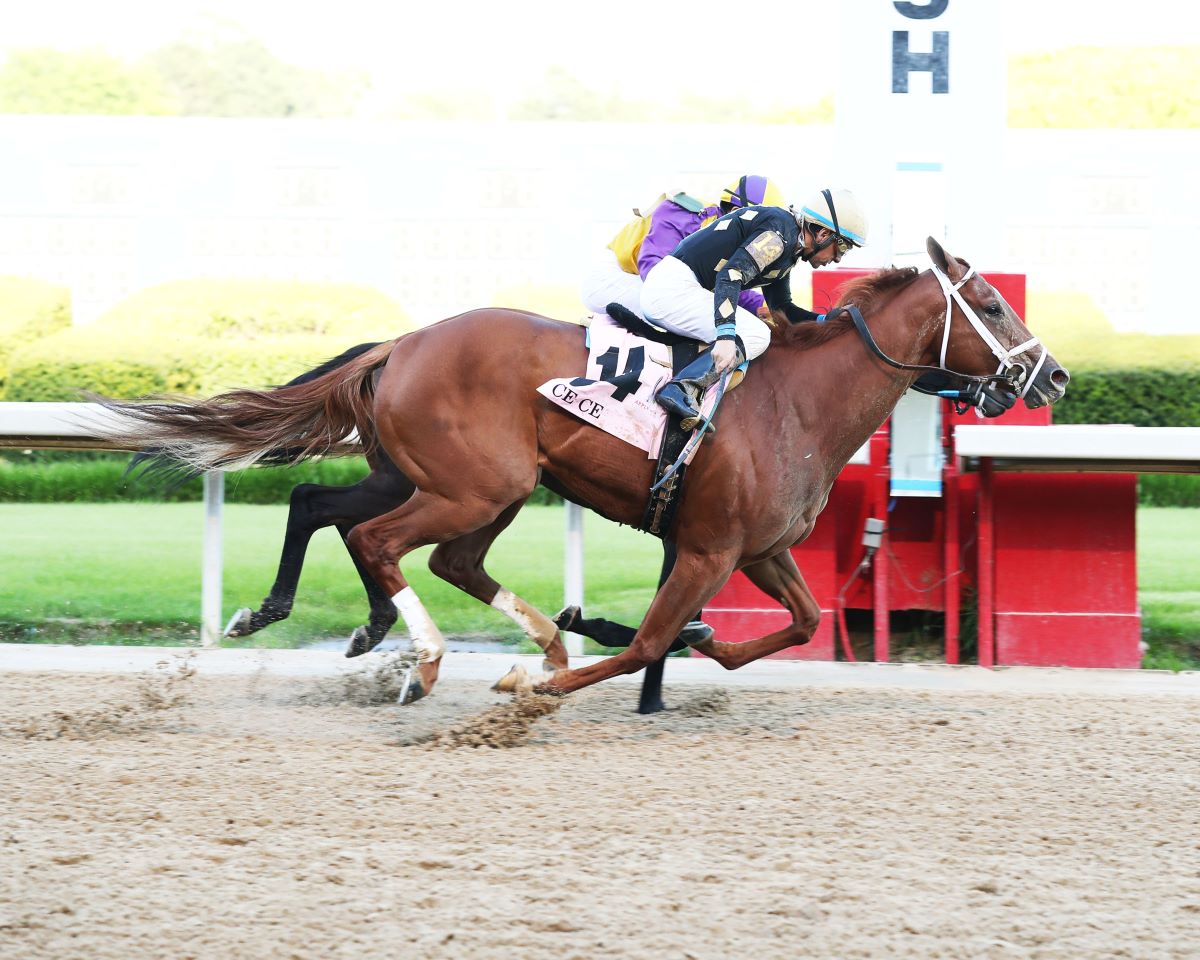 Victor Espinoza’s and Ce Ce’s nose victory in the Apple Blossom two years ago was her first Grade 1 score. She is the 3/1 second choice in Saturday’s Grade 2 Azeri Stakes at Oaklawn Park. (Image: Coady Photography)

That would be reigning Eclipse Award-winning female sprinter Ce Ce, who tangles with the Azeri’s defending champion: Shedaresthedevil. The enticing pair are two of the strong nine-filly/mare field tackling 1 1/16 miles. Post time is 5:10 p.m. (CT).

Looking for more than a supporting chorus role are two Grade 3 winners: Pauline’s Pearl and Lady Mystify. But even with reigning Champion Older Female Letruska back for her 6-year-old campaign, 3/1 Ce Ce vs. 5/2 morning line favorite Shedaresthedevil is a rivalry to watch this season.

“It’s a great field,” Ce Ce’s trainer, Mike McCarthy told Oaklawn’s Robert Yates. “I didn’t expect it to be easy. It’s a solid field, but I think she (Ce Ce) is the class of the field.”

Ce Ce has all the ingredients

Here’s the thing. Ce Ce should be the class of the field. Since winning the Grade 2 Princess Rooney Invitational at Gulfstream Park last July, Ce Ce is 3-for-her-last-5. The last victory in that stretch was the most impressive: a 2 ½-length score in the Breeders’ Cup Filly & Mare Sprint at Del Mar in November. Three of her eight career victories are Grade 1s, including the Apple Blossom Handicap here at Oaklawn two years ago.

That shows the 6-year-old Elusive Quality mare likes Oaklawn. Her 8-2-3 record in 17 starts shows Ce Ce is attention-worthy every time she walks on the track. So does the $1,793,100 in career earnings.

But here’s the other side of Ce Ce’s coin. As talented as she is, you often have no idea what awaits you. Especially in two-turn races, which the Azeri is. The last time Ce Ce tackled two turns came in last spring’s Grade 2 Santa Maria Stakes at Santa Anita Park. To say McCarthy would like a mulligan is an understatement. Ce Ce finished last in the four-filly field, 10 ¼ lengths behind As Time Goes By.

The defeat at the same 1 1/16-mile distance she travels today came as the 3/2 second choice. It also came with her lone double-digit Equibase Speed Figure (92) in her 17-race career.

“I never ruled it (two turns) out of the question,” McCarthy said. “Obviously, Oaklawn’s a racetrack that she’s fond of. Thought something like this made sense.”

Ce Ce opened her 2022 season getting beat as the 1/2 favorite in the Grade 2 Santa Monica Stakes at Santa Anita. That three-length loss to Merneith came at seven furlongs.

Shedaresthedevil is more consistent at this distance

So if you don’t trust Ce Ce and her trusted, Hall of Fame jockey Victor Espinoza – who has been aboard for all of her victories – what does Shedaresthedevil offer? The 5-year-old Brad Cox charge makes her first start since finishing sixth in that wild Breeders’ Cup Distaff last November.

Last year’s Azeri, in which Shedaresthedevil wired the field and beat Letruska by a head, jump-started Shedaresthedevil on her current 4-for-6 run. That includes two Grade 1 victories: the La Troienne at Churchill Downs as the 8/5 favorite, and the Clement L. Hirsch at Del Mar as the 6/5 favorite. Shedaresthedevil owns seven victories in 10 races at this distance.

Aside from that not inconsiderable factor, what makes the daughter of Daredevil dangerous in every race is her versatility. There was that gate-to-wire Azeri score. But at Oaklawn two years ago, there was also her textbook come-from-behind rally in the Grade 3 Honeybee. There, Shedaresthedevil came from fifth on the backstretch and fourth entering the stretch with a powerful rally to win by less than a length over 2.20/1 favorite Alta.

“She’s able to set off. She doesn’t have to have the lead or anything,” Cox said. “She broke incredibly sharp last year in the Azeri. So, just play the break and that will be up to (jockey) Florent (Geroux) on where he feels comfortable.”