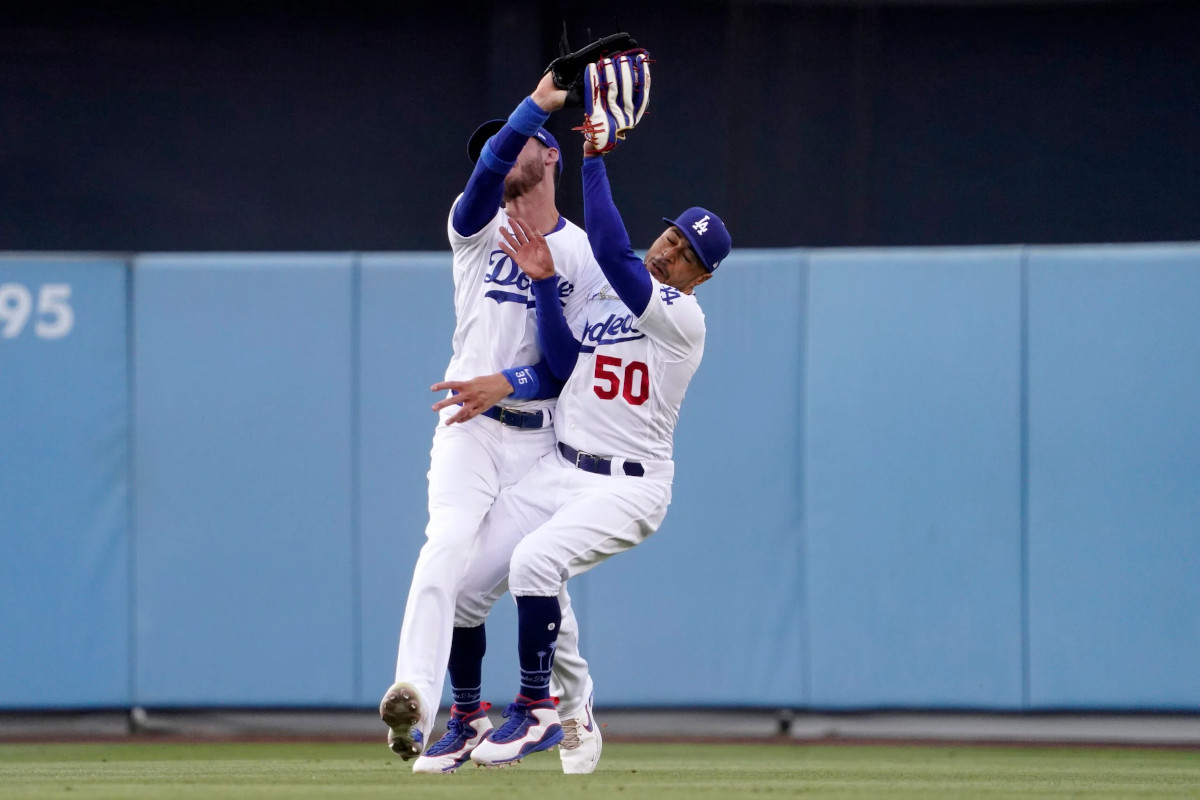 The Dodgers placed Mookie Betts on the 10-day injured list due to a cracked right rib after he collided with Cody Bellinger on Wednesday. (Image: Mark J. Terrill/AP)

Betts sustained the injury after colliding with outfielder Cody Bellinger on Wednesday in a 4-1 win over the Angels.

The 29-year-old Betts is hitting .273 with 17 home runs and an .884 OPS this season. The Dodgers estimate that Betts will miss around two weeks with the injury.

“It’s certainly a big blow for all of us,” Dodgers manager Dave Roberts told reporters. “But having the information and knowing what it is, at least there’s solace in that and hopefully we’ll get him back sooner than later.”

A first X-ray didn’t reveal any damage to Betts’ rib. While he still sat out on Friday, the Dodgers initially planned to play him on Saturday before benching him yet again. Betts remained sore, and sent him to have an MRI, which revealed the damage.

“I thought it was just a bruise,” Betts told reporters. “As I was preparing for the game, it just got a little worse and a little worse. That’s when I knew I needed to go get it checked out.”

The Dodgers aren’t the only NL West team that will have to cope without a star player for the near future. San Diego Padres third baseman Manny Machado exited Sunday’s 8-3 loss to the Colorado Rockies with a left ankle sprain in the first inning as he attempted to beat out an infield hit.

The good news for the Padres is that X-rays on the ankle came back negative.

“Fortunately, when he felt himself slip, he was able to shift his weight to the right and probably avoid more serious damage,” San Diego acting manager Ryan Flaherty told reporters. “All in all, it’s as good as it could be.”

Nonetheless, the Padres have yet to determine when Machado will return to the lineup. Machado is hitting .328 with 12 home runs this year. He is carrying the San Diego offense while Fernando Tatis Jr. continues to recover from breaking his wrist in the offseason.

Machado and Betts both rank among the leading MVP candidates in the National League. FanDuel Sportsbook rates Machado second in the race for the award at +500, behind only Paul Goldschmidt (+200). Betts ranks fifth, at +1000 odds of winning MVP honors.

Both the Dodgers and the Padres have bigger concerns than those individual awards. Los Angeles currently holds a half-game lead over San Diego in the NL West race, while the San Francisco Giants are just three games back. While all three teams are likely to make the playoffs, the winner of the division could earn a first-round bye.

DraftKings Sportsbook rates the Dodgers as the -190 favorite to win the NL West. The Padres are a +240 pick, while the Giants come in as the +700 dark horse to win the division.