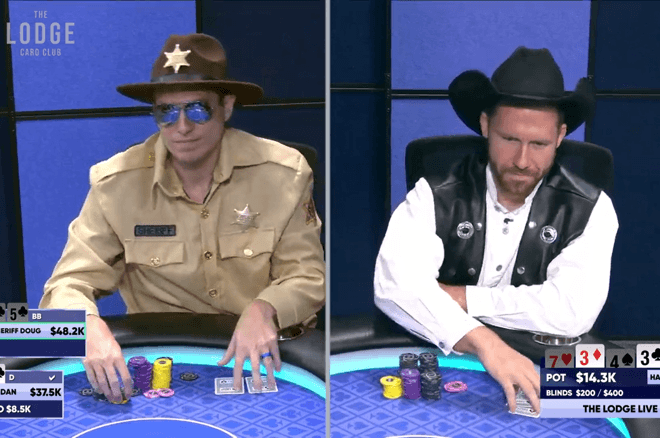 Doug Polk invited Dan “jungleman” Cates out to his card room in Round Rock, Texas — The Lodge — for a friendly but highly competitive game of high-stakes heads-up poker, which took place on livestream Friday afternoon with the casino owner coming out victorious and dominating most of the match.

Both players dressed up in costume for the six-hour $200/$400 no-limit hold’em battle — Polk as a police sheriff, although he more resembled a park ranger, and Cates as a not-so intimidating cowboy.

The poker superstars were good sports and at least attempted to remain in character for much of the session, especially “Jungleman” who really seemed into the gig.

While writing this tweet he turned to me and said

Polk the Better Player on this Day

Although the poker pros, who are friends goofed around and made sure to entertain the audience watching on The Lodge Live YouTube channel, they were playing for real money and weren’t messing around when it came to their poker strategy.

Polk and Cates have an extensive history battling against each other, although they haven’t faced off much in recent years, but they did compete in some heads-up cash games years ago online, with “Jungleman” getting the best of Polk. The tides turned a bit on Friday afternoon in Texas however.

Each player initially bought in for $50,000 — 125 big blinds — but they each topped up quite often, especially Cates, who found himself in a hole early on.

When all was said and done, Polk booked a $53,000 win, the equivalent of about one buy-in.

Everybody Loves a Chop Pot

Polk was up quite a bit more than the end result at one point, and he could have finished with an even larger margin of victory if a few all ins had gone more his way. In three instances, the players ended up chopping monster preflop all-in bets.

Early on, Cates won a fairly sizable pot against the co-owner of the host venue. With

on the button, he raised it to $1,000 and the big blind defended with

and both players checked to see the

Things quickly went south for “Jungleman.” In another hand, with $12,000 in the pot and six-high in the hole, he ripped off an over-bet of $18,000, but the bluff didn’t get through as his opponent called with a small pair.

Most of the biggest pots ended up in chops. Take for example, the hand of the day in which Polk, with

The competitors agreed to run it twice and it’s a good thing for Polk, who initially wanted to run it just once, because the first board ran out

, a full house for Cates. On the second board, which was

, the pocket aces held up and they chopped the pot. 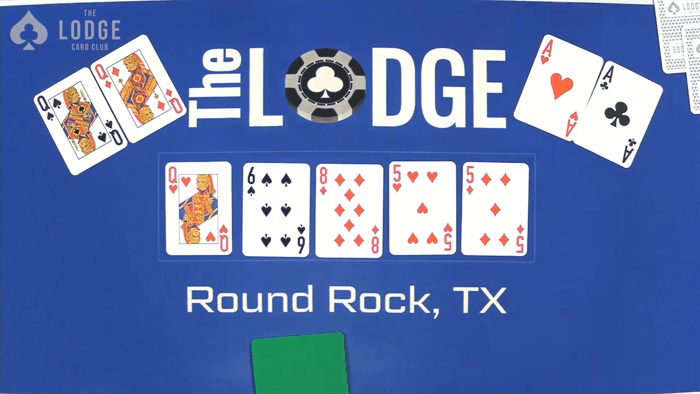 In two other monster preflop all in pots, the outcome — a chop — were the same, including one instance in which they got it in for $58,000 with Polk holding

In the second to last hand, Cates hit the nut flush to gain some chips back and finish it off with a slimmer margin of defeat than it could have been. After spending months stuck at The Lodge, at one point more than $200,000, Polk has rebounded and is out of the red at the poker room he co-owns.

Last week, he finished fourth in the Lodge Championship Series Main Event for $142,000 to get back in the black, and has added on another $53,000 profit against Cowboy Dan.