The Boston Celtics and Golden State Warriors are deadlocked at 2-2 in the NBA Finals with the Warriors returning home for Game 5. The Warriors opened as -3.5 favorites, but the point spread is currently -4. 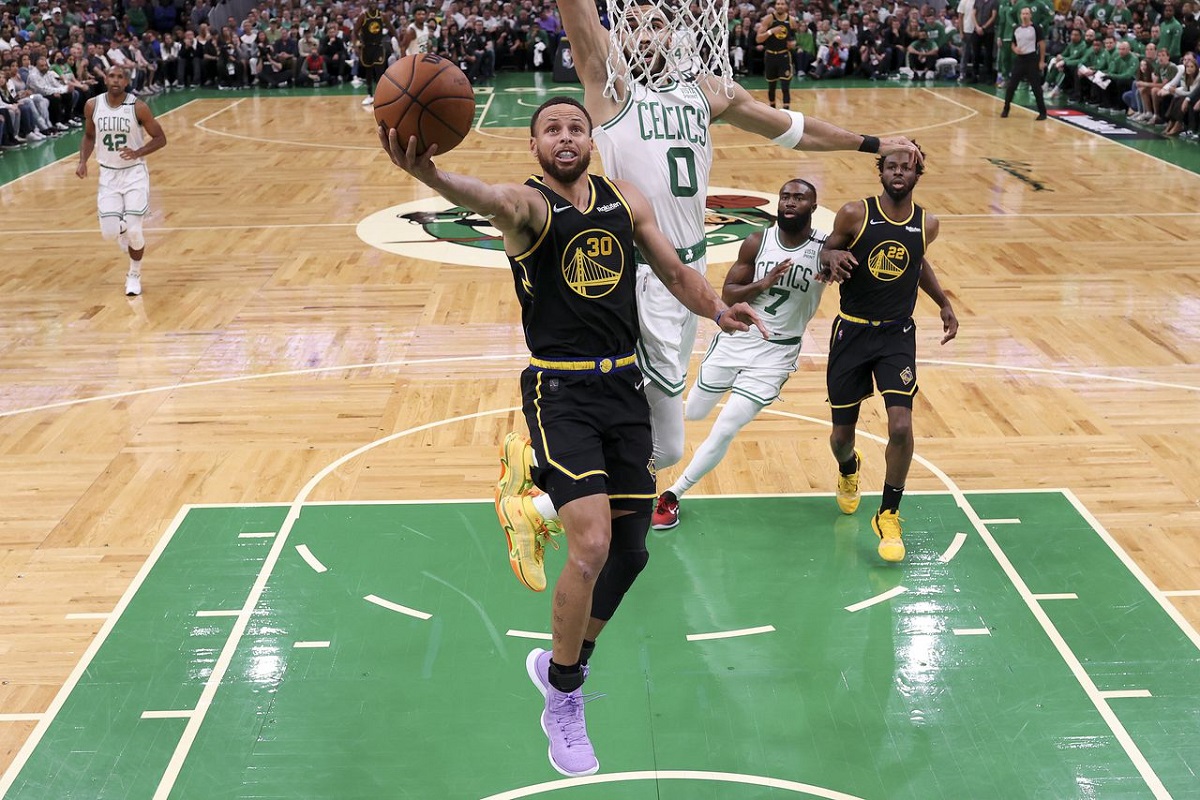 Steph Curry from the Golden State Warriors has a wide-open layup against Jayson Tatum and the Boston Celtics in Game 4 of the NBA Finals. (Image: Getty)

The Warriors won Game 4 to tie the series after an insane 43-point output from Steph Curry to lead his squad to a must-win victory. It’s a best-of-three game series right now, but both teams are just two victories away from winning the title.

The Warriors are -130 odds to win the 2022 NBA championship with home-court advantage, while the Celtics are +110 odds. The NBA Finals returns to Boston for Game 6, but the Warriors get to host Game 7 at home in San Francisco if necessary.

The NBA released referee assignments for Game 5 with Marc Davis as the crew chief, along with Tony Brothers, Josh Tiven, and alternate James Williams.

Loyalty is very important, especially when it comes to winning an NBA title. Draymond Green has been the glue that held the Warriors together during their previous championship runs. Head coach Steve Kerr and the rest of the Warriors know how important Green has been for the entire franchise, but he’s now entered the back nine of his career and not the same force he used to be.

Green’s offense has been particularly awful in the NBA Finals, which left everyone watching the games baffled why Kerr did not sub out Green much sooner. Even Green’s mother voiced her concerns on Twitter. Yet, the answer is simple: loyalty.

However, with Game 4 on the line, Kerr finally benched Green. The results were immediate and the Warriors took over the game. But the benching was not final, because Green returned to the floor in crunch time and made a couple of key plays to help slam the door on a Celtics’ comeback attempt.

Green has always been the type of player that will do anything to help his team win, and that includes the errant elbow or occasional punch in the junk. In Game 4, the Warriors needed him to sit for a long stretch in the fourth quarter while Jordan Poole provided the team with a more reliable scoring presence.

We’ll see if the Warriors are in trouble again late in Game 5, and if Kerr shuffles his lineup earlier instead of waiting until the fourth quarter.

Jaylen Brown (22.3 ppg) has provided a steady hand for the Celtics in the NBA Finals. However, fans are starting to wonder when Tatum will finally bust out of his funk.

“Where’s JT’s monstah game?” bemoaned one Celtics fan while trudging out of TD Garden after Game 4. “Curry spit in our face for 43 (points), but where’s Tatum’s 43 game?”

If there’s ever a time for a sleeping giant to wake up, it’s Monday night for Tatum and the Celtics in Game 5. Tatum averaged 25.6 ppg over his last three game while shooting 45.2% from 3-point range in the NBA Finals. But, Tatum has not unleashed his inner Kraken… yet.

Tatum exploded for 39 points in Game 3 against the Brooklyn Nets in the first round. He dropped 46 points against the Milwaukee Bucks in an elimination game in Game 6 on the road in round two. He also had two 30-point games against the Miami Heat in the Eastern Conference Finals. In the NBA Finals, Tatum’s biggest scoring effort was 28 points in a Game 2 loss.

“It it’s on me, I got to be better,” said Tatum. “I’m impacting the game in other ways, but I got to be more efficient, shoot the ball better, finish at the rim better.”

Tatum took only five shots in the fourth-quarter implosion in Game 4, and he missed four of them. Andrew Wiggins has been playing some stellar defense on Tatum, with the rest of the Warriors quick to help out.

“We don’t do this s–t on purpose,” added Tatum. “I promise you we don’t. There’s certain things we got to clean up. Obviously turnovers, movement on the offensive end.”