The Grade 2 Princess Rooney Invitational played a key role in Ce Ce’s coronation as Champion Female Sprinter last year. And the marquee race on Gulfstream Park’s Summit of Speed card provides the perfect setting for the versatile mare to defend her title. 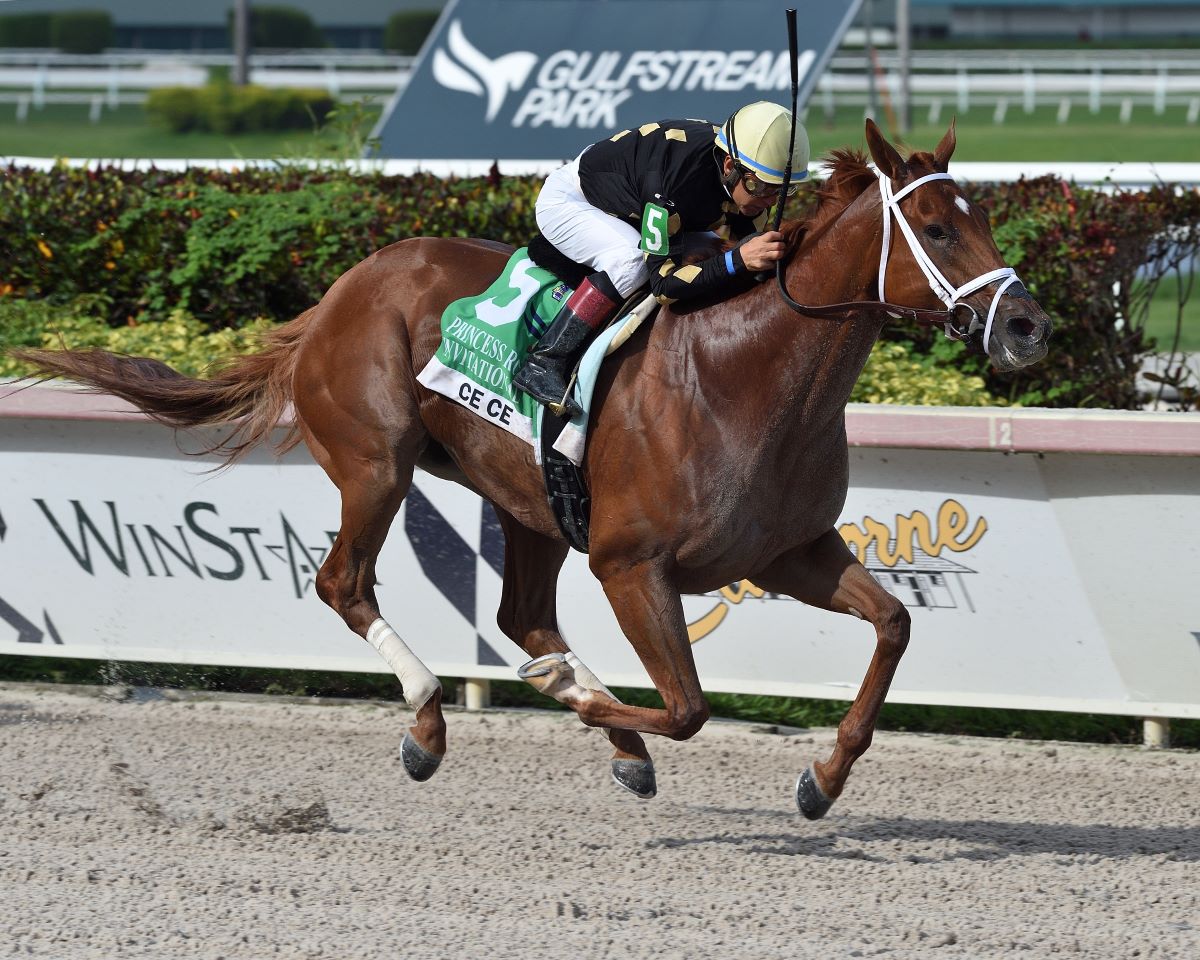 Champion sprinter Ce Ce returns to defend her title in the Grade 2 Princess Rooney Invitational. THe 6-year-old mare is the 4/5 favorite to repeat. (Image: Gulfstream Park)

Saturday’s $300,000 Princess Rooney is a seven-furlong sprint for fillies and mares. It’s the perfect stepping stone for 4/5 favorite Ce Ce to not only defend her crown here, but in the Breeders’ Cup Filly & Mare Sprint. The Princess Rooney is a “Win and You’re In” Challenge Series event.

In last year’s Princess Rooney, Ce Ce punched her Breeders’ Cup ticket with a 3 1/4-length triumph that came with a 110 Equibase Speed Figure. That was the second highest Equibase in Ce Ce’s 19-race career. She parlayed that into a gate spot in the Breeders’ Cup Filly & Mare Sprint.

In turn, Ce Ce parlayed that into a 2 1/2-length victory at 6.20/1. This built the final piece to the bridge that brought the daughter of Elusive Quality that Eclipse Award.

“Those are the kind of things that you can leave your mark on the game with horses like her,” trainer Michael McCarthy told Gulfstream Park. “It’s wonderful that she can be recognized as an Eclipse Award champion. It’s wonderful to do it for a guy like (owner) Bo Hirsch. He’s just a real patron of the game. His family’s been around for a long time. His father was a real icon of California. So, it’s a big deal, a big deal for us and a big deal to be able to share it with someone like Bo Hirsch.”

It’s Ce Ce’s versatility that makes her formidable. She owns two Grade 1 victories at two turns: the 2020 Beholder Mile at Santa Anita and the 2020 Apple Blossom Handicap at Oaklawn Park. Three of her four 2021 triumphs came at seven furlongs. The fourth, in the Chillingworth, came at 6 1/2.

Versatility at many tracks

This year, Ce Ce is 1-1-1, with a victory in the 1 1/16-mile Azeri topping the ledger. She has a second in the seven-furlong Grade 2 Santa Monica and a third by less than two lengths to Letruska in the 1 1/16-mile Apple Blossom. Forgive yourself for wondering what Ce Ce was doing in the Apple Blossom, tangling with Eclipse Award-winner Letruska and Eclipse Award-nominated Clairiere (who finished second).

“Earlier this year, with nothing really fitting (in Southern California), we decided to go to Oaklawn for the Azeri,” McCarthy said. “She ran so well in the Azeri that we decided to go back and give it a shot in the Apple Blossom. It looked like a race on paper that wasn’t going to be easy on us from a pace scenario. You had Letruska in there who was the lone speed. We didn’t want her to get too far away from us, so we took the race to her fairly early. I thought she ran well in defeat. It was one of those things, timing-wise, that  you had to take a chance.”

Winning last year’s Princess Rooney sent Ce Ce off and running to a seven-race, in-the-money streak (4-1-2). Throw in her fourth in the Grade 2 Santa Maria Stakes last May and she hasn’t missed the superfecta in her last nine races. The mare is 9-2-4 in 19 career starts, with $2,103,100 in the bank.

“She’s just an incredibly classy mare. She’s always aiming to please,” McCarthy said. “I said it before: I wish all my colleagues, at one time in their lives, could have a mare like her, because all she does is try. She’s made us look good a couple of times. We’re not lost in the fact of what she’s done for us, so we try to do everything right for her.”