The Carter Handicap is one of only two Grade 1s on Aqueduct’s schedule; the other being December’s Cigar Mile. Yet, the seven-furlong sprint is not the headliner on the Big A’s 11-race Saturday card. 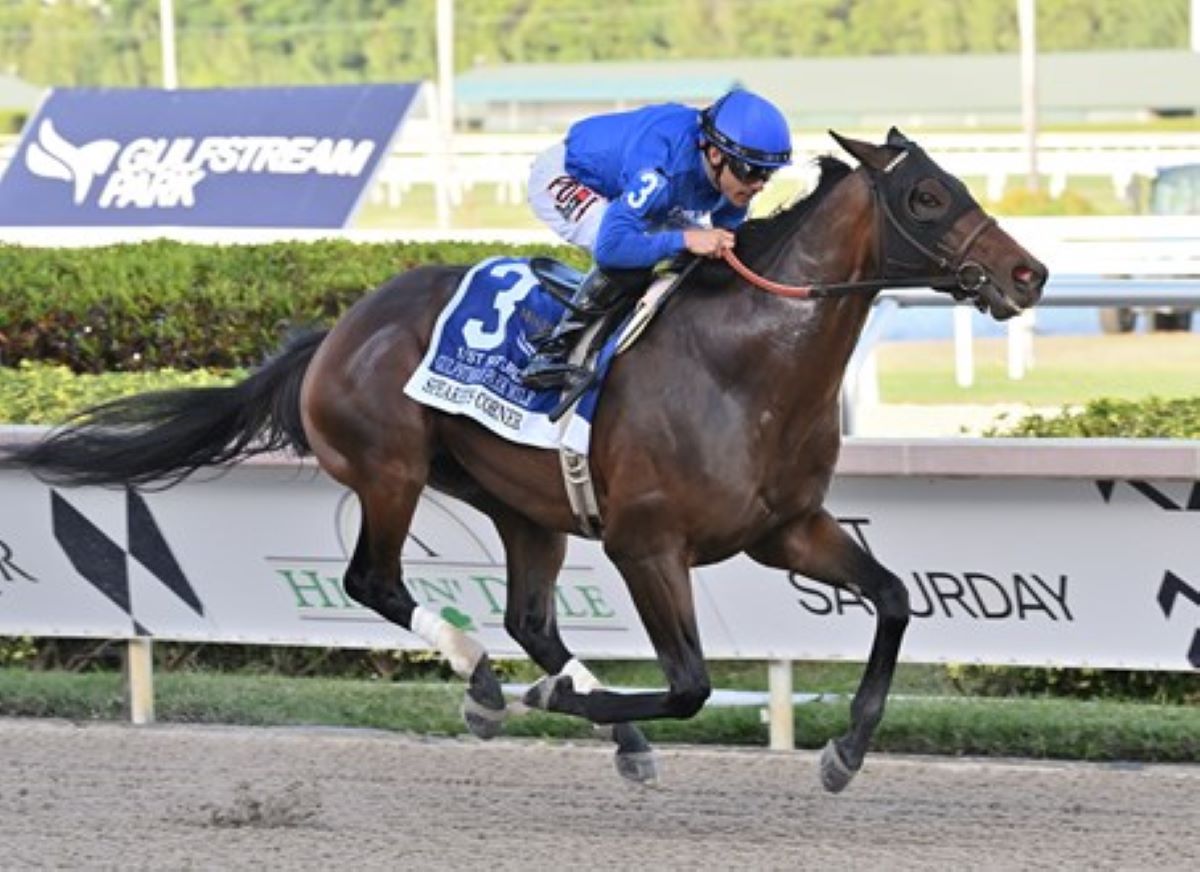 Speaker’s Corner is the 8/5 favorite to win the Grade 1 Carter Handicap, the first NYRA Grade 1 of 2022. (Image: Coglianese Photos/Lauren King)

That would be the Grade 2 Wood Memorial, which gets top billing thanks to its late stop on the Kentucky Derby trail. But the Carter, held for 4-year-olds and up, does earn status for being the New York Racing Association’s first Grade 1 race of 2022.

It also draws fame for being the only American stakes race finishing in a triple dead heat. That happened in 1944, when Brownie, Bossuet and Wait A Bit somehow crossed the wire simultaneously.

You get that kind of pedigree when you date to 1895. And even with the Carter’s undercard status, the race does offer standout sprinters you usually hear from later in the season.

One who could fit that description is Speaker’s Corner. The 8/5 morning line favorite made his stakes debut at Aqueduct with a half-length runner up finish to Miles D in the Grade 3 Discovery last November. The start before that, he dismantled a Belmont Park allowance by 6 3/4 lengths. The 109 Beyer Speed Figure that came with it told his connections — starting with Hall of Fame trainer Bill Mott — that Speaker’s Corner spoke louder as a miler than as a router.

Last September, Speaker’s Corner finished a distant sixth to Hot Rod Charlie in the Grade 1 Pennsylvania Derby. This prompted Mott and Michael Banahan, owner Godolphin’s bloodstock director, to cut Speaker’s Corner back to one turn. His runner up to Miles D in the 1 1/8-mile, two-turn Discovery did not alter that belief.

“He showed plenty last year. We tried stretching him out, but it wasn’t really what he wanted to do,” Banahan told Aqueduct’s Brian Bohl. “We got him back out to one-turn miles and he was impressive in both of those. That’s what it looks like he wants to do.”

Mind Control no stranger to the Carter

Speaker’s Corner illustrated that in his 2022 debut, winning the Grade 3 Fred W. Hooper at Gulfstream Park in gate-to-wire fashion. He carried that momentum into a 5 1/2-length victory in the Grade 2 Gulfstream Park Mile in March, one that came with a 106 Beyer. He’ll carry the high weight of 124 pounds.

Figuring to chase Speaker’s Corner is a familiar name: Mind Control (7/2). He comes back off a six-month layoff for his third consecutive Carter. He finished sixth in the 2020 race held at Belmont Park, then second — albeit by 5 1/2 lengths — to Mischevious Alex in last year’s edition.

The last time Mind Control ran, he won September’s Parx Dirt Mile with a 104 Beyer. That prompted trainer Todd Pletcher to dial him in for the Breeders’ Cup Dirt Mile at Del Mar. But Pletcher scratched him after Mind Control spiked a fever.

“We loved the way he ran at Parx and unfortunately, he didn’t get to run in the Breeders’ Cup. He shipped out to California, but spiked a temperature, so that was the end of the year for him,” Pletcher said. “He wintered really well … and came in looking super. He’s training consistently like he always does. He’s a happy horse and trains well and traditionally runs well fresh. We’re looking for him to pick up where he left off.”

Mind Control’s six-month hiatus pales when you compare it to Reinvestment Risk (4/1). The Chad Brown charge, who racked up a pair of Grade 1 runners up finishes to Jackie’s Warrior as a 2-year-old, owns two starts since November 2020.

After a 10th-place finish in that year’s Breeders’ Cup Juvenile, Reinvestment Risk ran only once as a 3-year-old. That came last June in a Belmont Park allowance optional claimer. Not liking what he saw coming out, Brown gave him the next seven months off.

He turned him loose in another allowance optional claimer this February at Gulfstream Park and watched Reinvestment Risk win by three lengths. The 102 Beyer was a career high in only his second race in 15 months.

“He didn’t exit his race last year in good shape, so he went to the sidelines,” Brown said. “This year, he came out of it in good shape and ran much better.”

The wild card could be 9/2 Green Light Go, who comes in off two one-turn mile victories. Those wins: in an allowance by nine lengths, and the Listed Stymie Stakes by 3 1/4, displayed a relaxed running style that trainer Jimmy Jerkens said will be tweaked for the Carter.

“He showed easy speed going a mile, but against better horses at a shorter distance, he might be forced to stalk a little bit,” Jerkens said.

The Carter is the ninth race on Aqueduct’s 11-race Saturday card.