If you treat the NBA futures market like real financial investment opportunities, then keep an eye on both pro basketball teams in Los Angeles. When it comes to 2023 NBA championship futures, you should “buy” the LA Clippers with Kawhi Leonard returning to action, and “sell” the LA Lakers if Russell Westbrook does not get traded this offseason. 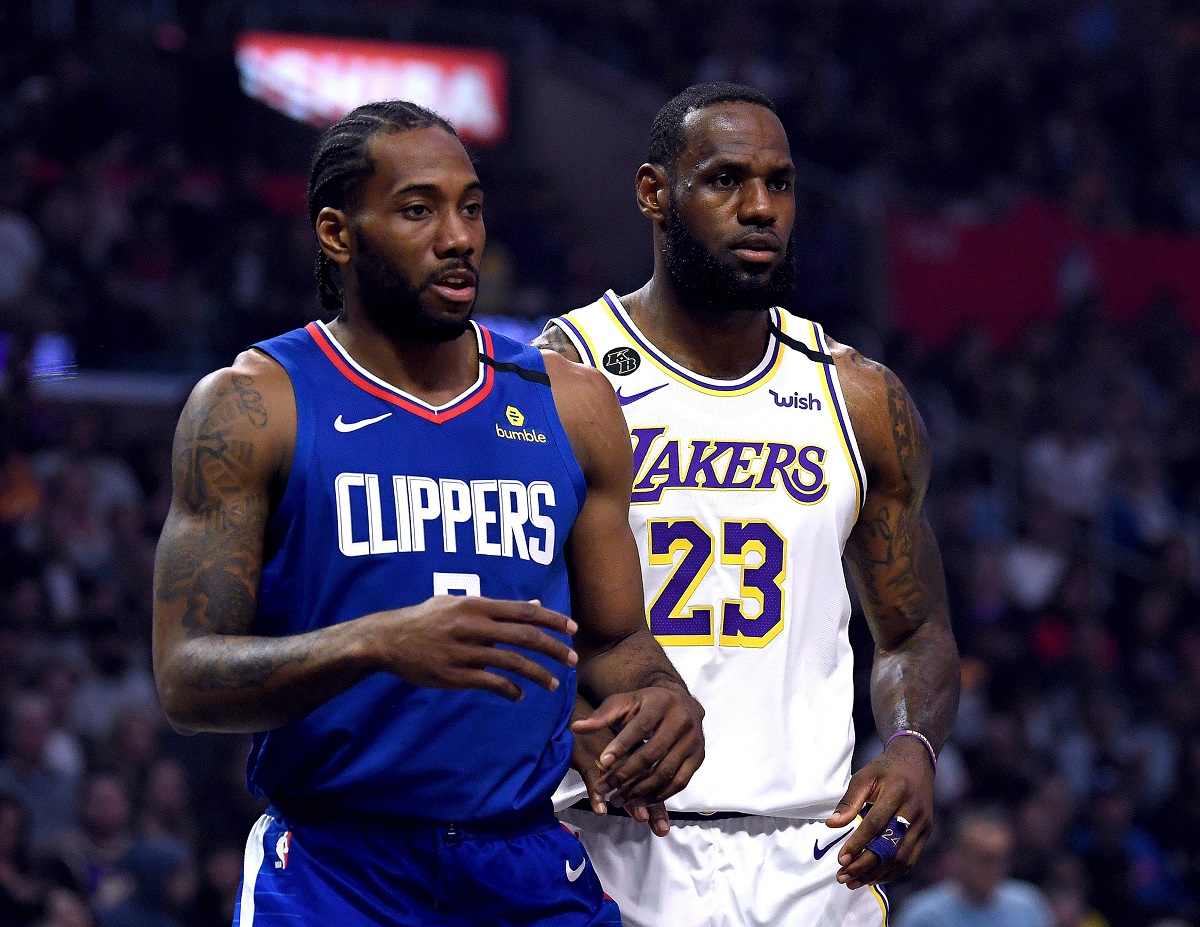 Kawhi Leonard from the Los Angeles Clippers and LeBron James of the LA Lakers will try to lead their respective teams to a NBA championship in 2023. (Image: Harry How/Getty)

The Lakers were a huge disappointment last season finishing in 11th place with a 33-49 record. They played so poorly that fans and trolls referred to the underachievers as the “Losing Time” Lakers.

We’re not real financial advisors, but we love basketball and have a good grasp on what’s going on behind the scenes in the City of Angels Both the Lakers and Clippers failed to secure a spot in the 2022 NBA Playoffs, but both teams have championship aspirations heading into the 2022-23 season.

The Clippers are one of four co-favorites to win the 2023 NBA championship at +600 odds  — along with the newly minted champion Golden State Warriors, Boston Celtics, and Brooklyn Nets — according to the NBA futures board at DraftKings.

The Lakers are +2000 odds to win the 2023 championship, which would be the second once since LeBron James joined the team in 2019.

Without two All-Stars in the lineup, the Clippers still finished above .500. Ty Lue deserves all the credit for pushing the team to overachieve without their two big dogs. Toss in COVID madness and other injuries, the Clippers winning 42 games is something to build upon for next season.

The Cardiac Clippers did not wilt in the face of adversity. They stormed back from being down by 20-plus point deficits on multiple occasions, including 35 points against the Washington Wizards. When you have a roster loaded with 3-point snipers like Luke Kennard, the Clippers were never out of a game if their shooters got hot.

The Clippers should upgrade the point guard spot, or stick with their platoon consisting of Reggie Jackson and Terence Mann. Jackson has one more season on his contract, while Mann is in his final season of his rookie contact. The durable Mann led the Clippers with 81 appearances including 33 starts. He did a bang-up job last season averaging 10.6 points, 5.2 rebounds, and 2.6 assists per game off the bench.

The Clippers will also have Nicolas Batum, Robert Covington, and Norman Powell back at full strength. Powell – a former teammate of Kawhi’s with the Raptors – signed a free-agent deal with the Portland Trail Blazers, but the Blazers imploded their team and sent Powell to LA in a trade. Powell provides the Clippers with a legit third scoring option behind Kawhi and George.

We like the Clippers to win the title next season at +600 odds, so long as Kawhi and PG-13 do not miss any time with new, or old injuries. Kawhi won titles with the San Antonio Spurs and Toronto Raptors, and will try to win a third ring with the Clippers.

The Lakers have three huge problems preventing them from winning another NBA championship: health, Russell Westbrook, and lack of depth.

Two major trades left the Lakers with a thin bench aside from the Big 3 consisting of LeBron, Anthony Davis, and Westbrook. The team leveraged their future to acquire Anthony Davis in a trade with the New Orleans Pelicans, and he missed more than half the season in 2021-22. The Lakers lost all their valuable role players and bench guys when they acquired Westbrook in a trade with the Washington Wizards last summer. Without much help, the Lakers were a losing squad, especially when LeBron and Davis missed time with injuries.

Anthony Davis appeared in just 40 games last season, and the paper mache big man missed more than half the season. Meanwhile, LeBron missed 26 games with numerous injuries, which is more than a quarter of the season.

At 37-years young, LeBron missed out on a potential scoring title while averaging more that 30 points per game for the third time in his illustrious career. He moved into second on the all-time scoring list and only Kareem Abdul-Jabbar stands in his way from breaking the record. LeBron had to score a bunch because he didn’t have much help.

If Davis and LeBron avoid injuries this season, they could compete for a championship. But the Lakers might not even be the fifth best team in a stacked Western Conference with Kawhi returning to the Clippers and Jamal Murray returning to the Denver Nuggets. The Minny Timberwolves are an up-and-coming squad, and the New Orleans Pelicans could do some damage if Zion Williamson can avoid the IR.

Rob Pelinka, the Lakers general manager, could not trade Westbrook before the deadline in February because the team lacked tradeable assets. The Lakers coughed up first-rounders in the Davis trade to the Pelicans. With three max-contract stars on the payroll, the Lakers lacked any attractive veterans with expiring contracts. Things were so bleak that the Lakers considered trading Westbrook for John Wall, but the Houston Rockets wanted a first-round pick to sweeten the deal.

Westbrook had a player option for this upcoming season worth $47 million, so the Lakers are stuck with him in 2022-23 if they cannot find a team stupid enough to take him. And let’s be honest here, very few teams are interested in doing the Lakers — especially LeBron — any favors.

Westbrook’s unwillingness to conform to the Lakers’ offensive scheme ended up getting head coach Frank Vogel fired. We’ll see if newly hired head coach Darvin Ham can persuade Westbrook to buy into whatever system the rookie head coach installs with the Lakers. Ham was the right-hand man under Mike Budenholzer during his tenure with the Atlanta Hawks and Milwaukee Bucks. Ham won a ring as an assistant coach with the Bucks last season and it was only a matter of time before he finally got a head coaching job. Ime Udoka guided the Boston Celtics to a trip to the NBA Finals in his first season as a head coach, so the Lakers hope Ham can replicate the rare feat for a newbie.

The Lakers might have to wait until early 2023 to trade Westbrook, but will it be too late?

With Westbrook and his $47 million weighing down the Lakers, it’s best to avoid getting stuck with a worthless futures ticket at +2200 odds.