After the Cleveland Browns acquired Deshaun Watson in a trade with the Houston Texans, it seems that the next logical step involves trading former starting quarterback Baker Mayfield. The Seattle Seahawks and Carolina Panthers are both on the shortlist of teams that could acquire Mayfield in a trade with the Browns. 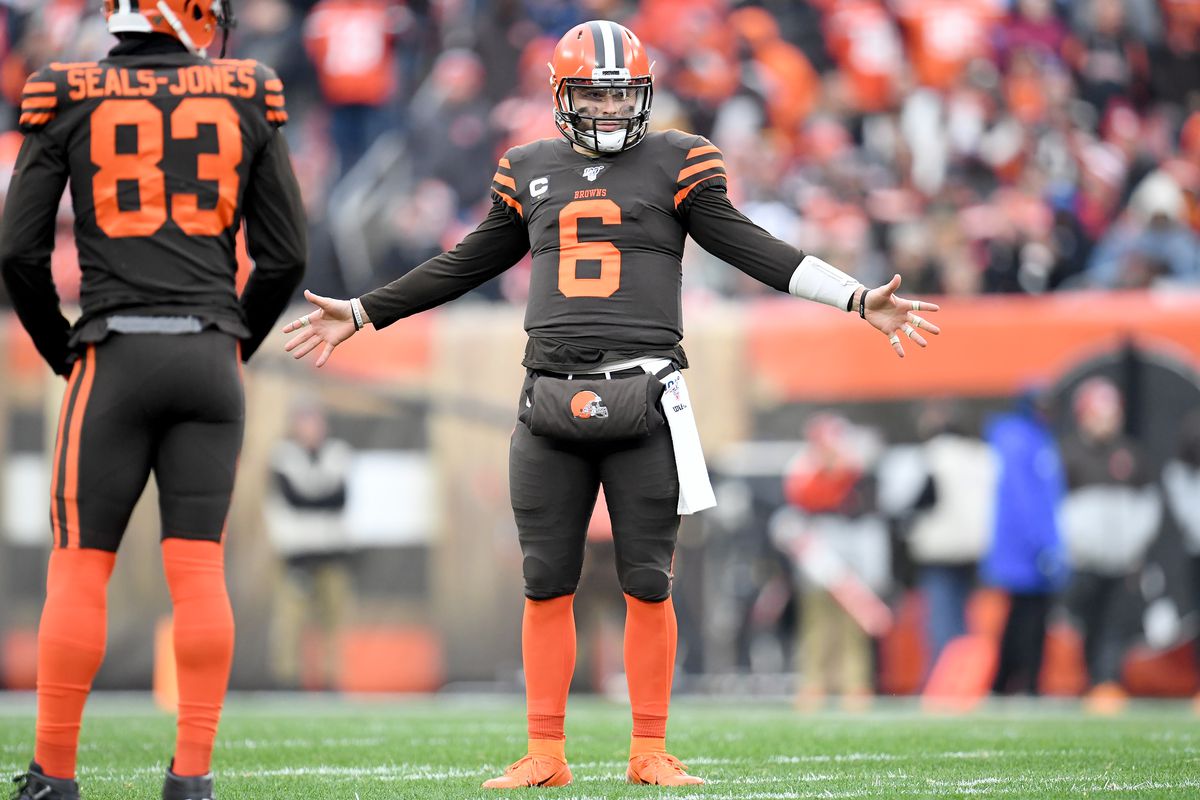 Baker Mayfield most likely played his last game with the Cleveland Browns and he’s the subject of trade rumors with a shot at a second chance in either Seattle or Charlotte. (Image: Jason Miller/Getty)

There are also other scenarios in which the Browns hold on to Mayfield as a backup, but he’ll be an expensive second-stringer who’s due a guaranteed $18.4 million salary in 2022.

“We feel like we have three good quarterbacks, and a lot of teams are still looking for one guy, so you don’t mind being deep here,” said general manager Andrew Berry. “Quarterbacks are valuable. Baker’s a good player and you can’t have enough good players on your roster. So, we don’t really feel pressed to rush into anything that’s suboptimal.”

The Browns could wait until the season starts and then trade Mayfield to a team that loses their starter to an injury in the opening month.

The Browns could also pull a move similar to what happened with Odell Beckham, Jr. last season. They would negotiate a buyout to allow Mayfield to become a free agent. Teams will be able to sign Mayfield at a reduced rate without being on the hook for his current salary, nor would they have to give up a draft pick to acquire him in a trade.

Mayfield demanded a trade shortly before the Browns made their huge move to acquire Watson from the Texans. The Browns initially dismissed the trade request until they secured Watson.

The Browns are now open to trading Mayfield, but there’s not much of an active market. For one, the Browns want a first-round pick for the former #1 NFL Draft pick. The current counter-offer on the table is a second-rounder.

“Everyone understands the situation, and we’re hoping that it is resolved soon,” said head coach Kevin Stefanski.

Mayfield wanted the Browns to trade him to the Indianapolis Colts. Pretty much everyone knew that the team was going to move on from Carson Wentz after they missed a shot at securing an AFC wild-card berth in the final week of the regular season. Wentz was another short-term, one-year rental for the Colts, much like Philip Rivers in 2020.

Mayfield thought he could thrive in Indianapolis, especially under head coach Frank Reich. With Jonathan Taylor emerging as one of the premier running backs in the NFL, the offense would be tailored to Taylor, so Mayfield wouldn’t have immense pressure to generate offense with JT on the roster.

However, the Colts traded Wentz to the Washington Commanders and then acquired Matt Ryan from the Atlanta Falcons. Ryan struggled in his last few seasons in Atlanta, but both he and the Colts think he has some gas left in the tank.

With the Colts off the table, there aren’t many job openings at quarterback.

Mayfield to Carolina or Seattle?

The Seattle Seahawks traded Russell Wilson to the Denver Broncos for a huge haul of picks plus Drew Lock. Lock was a subpar starter with the Broncos, but at least the Seahawks had someone they could plug into the open slot. The change of scenery could provide Lock a better environment in which to thrive if the Seahawks want to stick with him this season. Or, if they’d like to tank, then Lock is the perfect guy for the job. However, if the Seahawks are serious about upgrading their quarterback, then Mayfield is a better option than Lock.

Sure, a banged-up Mayfield was ranked #29 in QBR last season. But a healthy Mayfield finished the 2020 season ranked #10 in QBR.

The Carolina Panthers thought they had a shot at Watson, but the Browns swooped in at the last second and snatched away the coveted yet troubled quarterback. Without much of a Plan B, there were rumors that Carolina could re-sign Cam Newton as a backup to Sam Darnold.

Darnold might be better suited to being an NFL backup quarterback than a starter. If that’s the case, then the Panthers could acquire Mayfield in a trade with the Browns to install him as the starter, with Darnold penciled in as QB #2 on the depth chart.

Aside from Seattle or Carolina, there aren’t many other options for Mayfield prior to the upcoming NFL Draft.