Hall of Fame trainer Bob Baffert suffered another legal shot in his bid to keep his considerable stable running Monday when a Kentucky judge denied a stay of his 90-day suspension. 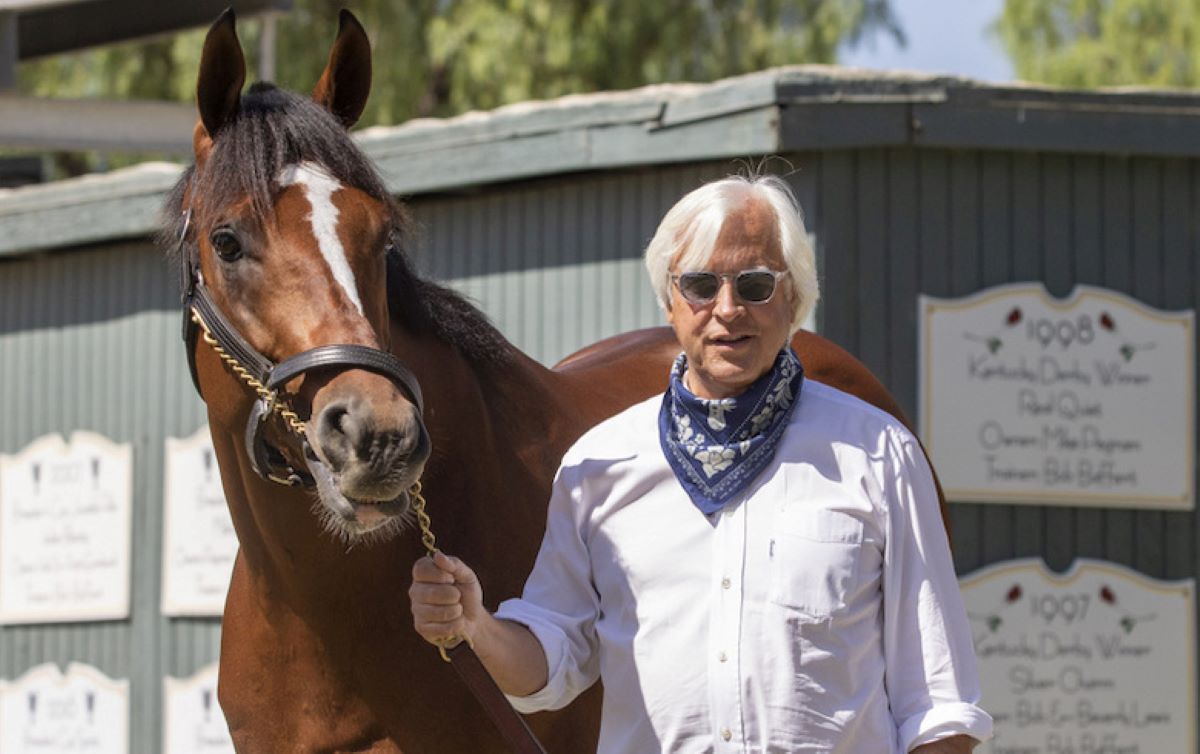 Bob Baffert may have to clear out his deep Santa Anita Park barn if his appeal is turned down. He suffered another legal blow Monday when his stay for a suspension was rejected. (Image: Zoe Metz Photography)

The suspension, $7,500 fine and forfeiture of Kentucky Derby winnings by Amr Zedan, the owner of the late Medina Spirit, came after the colt tested positive for betamethasone after crossing the finishing line first in the 2021 Kentucky Derby.

Judge Thomas Wingate of the Franklin Circuit Court denied the claim by Baffert attorney Craig Robertson that the trainer was entitled to a stay because the Kentucky Horse Racing Commission traditionally bestows them in medication cases.

Wingate denied that request, saying those stays are evaluated “on a case-by-case basis.”

“Accordingly, the Court cannot adopt a blanket rule that all requests for stays must be (automatically) granted. In fact, said rule would violate the intent of (the above law),” Wingate wrote in his ruling. “The statute’s existence and language openly suggest that a request for a stay should be evaluated on a case-by-case basis. Otherwise, logically, the General Assembly would have written the statute to provide for an automatic stay and would not have prescribed numerous avenues to appeal the denial of a stay.”

Which Baffert plans to do. Clark Brewster, another member of Baffert’s legal team, said he will appeal Wingate’s decision to the Kentucky Court of Appeals. Because of that appeal process, Wingate temporarily shelved the 90-day suspension, fine and forfeiture of winnings for two weeks to allow for an appeal.

Should the Court of Appeals deny Baffert’s appeal, his suspension would begin April 4, two days after the Grade 1 Arkansas Derby. Baffert is expected to have horses in that race, one of the four Grade 1 Derby preps.

A 90-day suspension would take Baffert out of the entire Triple Crown season. Due to his suspension from Churchill Downs, his horses are ineligible to run the Kentucky Derby anyway. The suspension would end July 4, in time for Baffert to run at Saratoga and Del Mar.

In last Thursday’s hearing, Robertson brought up another byproduct of that suspension. Because of reciprocity rules honored by racetracks across the country, Baffert would have to close his nearly 100-horse Santa Anita home barn. He’d have to clear out his strings at other tracks during the duration of the suspension.

Robertson argued to Wingate that doing this would effectively destroy Baffert’s career, putting him out of business. But the judge swatted that aside, using Baffert’s stellar record against him in his ruling.

“The Court is confident that Baffert’s career will not be destroyed by this ninety (90) day suspension. Baffert’s track record speaks for itself,” Wingate wrote. “Nevertheless, Baffert’s claimed injuries again generally relate to economic harm, which is not irreparable under Kentucky law. Baffert has failed to plead harm that would be irreparable.”

Wingate is no stranger to these cases. He was the judge who ordered the KHRC to turn over a urine sample to Baffert and Zedan for private testing at a New York lab last year. But one of Wingate’s previous cases set the table for Monday’s ruling.

That would be a 2015 case against trainer Graham Motion. His horse, Kitten’s Point, tested positive for methocarbamol, a banned drug. Motion appealed his suspension and fine and Wingate agreed, ruling the KHRC’s regulation of methocarbamol was “arbitrary and capricious and there was no rationale to uphold the constitutionality of the regulation (banning it).”

A reversal off the track cost Baffert this decision

But the state Court of Appeals overturned Wingate’s decision. It cited in its ruling that even though the effects of methocarbamol as a PED weren’t known, the KHRC does have legal authority to enforce its rules.

Wingate cited that in Monday’s ruling, saying “… the actual effect of a banned drug is irrelevant. Therefore, Plaintiffs have failed to demonstrate a substantial likelihood of success.”

Meanwhile, the KHRC will hear Baffert and Zedan’s appeal to that board April 18. This refers to the pair’s appeal of Medina Spirit’s disqualification, Baffert’s Churchill Downs suspension and the fine. They filed that appeal, citing an ointment for a skin rash as the source of Medina Spirit’s positive test and not an injection.