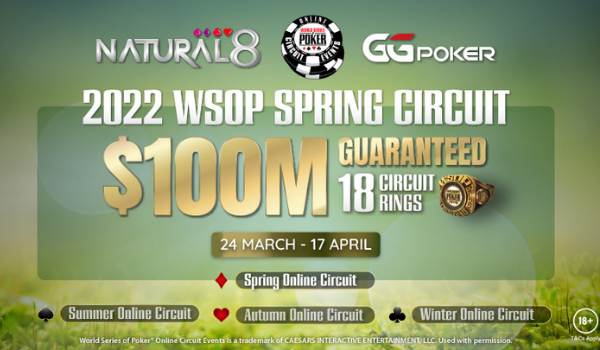 The World Series of Poker Spring Circuit is down to its final week at Natural8 – GGNetwork  with games running through April 17. Qualifiers for the MAIN EVENT $5 Million guaranteed and MYSTERY BOUNTY $2M guaranteed are ongoing. Only five rings left! Sign up on Natural8 to have a chance at exclusive member packages. N8 players Conor Beresford and Joachim Haraldstad have already won a LiveX Sponsorship worth $10,000. Promo details can be found at the bottom of the page.

Here’s a look at the next batch of winners. Out of the six newly minted players, three of them walked away with six figures, bracelet winner Joao Vieira scored his first ring, and Daniel “zafjekis” Reijmer banked the $2K High Rollers 6-Max for the largest pay of this bunch.

WSOP bracelet champion Joao Vieira added new hardware to his collection after taking down the Deepstack NLH Spring Championship. The Portuguese pro outlasted 1,793 other entries to rake in US$ 185,516 and his first ever WSOPC ring. As one of the most successful online grinders worldwide, Vieira continues to exert his online dominance with over US$ 30 Million in lifetime winnings. On the GG Network, he is pushing into the US$ 9 Million range. You can read all about him right here on Joao Vieira’s Poker Life.

Briefly reviewing the event, the top 260 earned a piece of the US$ 1,363,440 prize pool. The final table was an all international match-up led by Germany’s Tobias “TOBSEN_TE9” Eichenseher who carried in a monstrous stack. Also in the lineup were WSOP decorated players – India bracelet champion Abhinav “OBellaCiao” Iyer (5th) and Russian ring winner Anatoly Filatov (7th) – and two other Asians, Korea’s Hwany “upDraft” Lee (9th) and China’s “zhgaoq666” (8th). By heads up, they all dropped out, leaving the title chase between chip leader Eichensher and Vieira. The German entered with a 10 BB edge but hands later, one crucial pot turned the tide. Vieira jumped out front with a straight over two pair and from there, he held on until the gold was locked up.

Good gamble by Ukranian pro Stanislav “shrekpoker91” Halatenko who fired four bullets at the Big 500 PLO Bounty ring event then turned it into victory. At heads up, Halatenko overcame China’s hot running “sanwenyu2” to seize the title and gold ring. Along with the merchandise was the US$ 23,470 first prize, and with an impressive collection of US$ 49,925 in bounties, Halatenko hauled in a combined US$ 73,395 payout. Halatenko has had a spectacular series run. Prior to this win he shipped two WSOPC PLO side events amounting to US$ 19,035 and US$ 47,967.

The two day event attracted 1,256 entries for a prize pool of US$ 596,600. China’s “sanwenyu2” entered the final day as chip leader and maintained rank all the way to the final table. Despite not having much success on the network since signing up in March, the leader still sold all 25% of his action at no markup. As players tumbled, Stanislav “shrekpoker91” Halatenko was hot on the hunt and nearly caught up with sanwenyu2, however, after sanwenyu2 eliminated Jeppe Sorensen in 3rd place, the gap between them widened to 2:1.

After several punches back and forth, Halatenko landed a double up that changed the momentum of the game to his favor. Halatenko had

. With several more pots sent his way, Halatenko took the lead for the first time and carried it past the finish line.

Anonymous player from the Netherlands nicknamed “WoudIlieToYOU” came out victorious at the Monster Stack Bounty ring event to capture the coveted WSOPC ring. The champion outlasted the 1,788 entry field to win the US$ 36,875 first prize and bounties amounting to a larger US$ 48,581 for a combined take of US$ 85,456. This year has been a savior for WouldIlieToYOU who was in a slump up until March this year. WouldIlieToYOU won the network’s signature Global Millions Bounty Edition for US$ 68,607 to zoom out of the red then one week ago, WouldIlieToYOU shipped another Bounty event on the network for US$ 7,905. To date, WouldIlieToYOU has over US$ 306,300 in GG Net winnings.

The event was another guarantee crusher with 1,788 building a prize pool of US$ 894,000. The top 260 got paid. Among the players at the final table was Indian pro Raghav “TheCooon”Bansal who exited in 7th place.

The first ever Mystery Bounty ring event offered on the GGNet attracted a thunder of 8,905 entries across numerous entry flights for a guarantee crushing prize pool of US$ 1,781,000. 1,326 players advanced to the final day. After two night’s work, Dalton “morgota” Hobold made his country proud as he defeated anonymous player “shlafenderMann” at heads up. Due to this, Brazil became the first country to lock up a second ring in this series. For his win, Hobold banked the US$ 92,723 first prize plus mystery bounty rewards amounting to US$ 2,120 for a combined  US$ 94,843 payday. Although this wasn’t Hobold’s largest GGNet score, it was his first WSOP title. Among his biggest network wins were six figures at the Sunday High Rollers Main Event last November for US$ 100,654, then in February, he placed 6th at the Super MILLION$ High Rollers for US$ 116,854.

Hobold may have taken the gold in this event however two players bested him in payouts. Israeli player nicknamed “Dalida” finished 83rd for US$ 1,280 but having pulled one of the largest mystery prizes, Dalida ended up as the biggest earner of US$ 163,100 in total. Amassing the second largest payout was Natural8’s Bryan Paris who drew a US$ 96,630 mystery bounty. Paris placed 70th and collected a combined US$ 101,598.

GGMasters freezeout events have become quite popular on the network with buy-ins expanded and bounties added to indulge all types of players. At the WSOPC, the GGMasters NLH Circuit Championship US$ 1,050 buy in attracted 1,560 players for a prize pool of US$ 1,560,000. Among the players that reached the final table was Korean pro Hyungyu “GHSLG” Park who finished in a respectable 4th place for a career high US$ 86,116 payout. Following in his footsteps was Austrian pro Daniel “Razer2311” Rezaei in 3rd place who added another six figure score to his multi million dollar earnings. The title and ring went to Russian player nicknamed “GameOver” for a personal network high US$ 204,215.

Prior to this win, GameOver had a number of big GGMasters successes. Among GameOver’s deepest runs was a 4th place finish at the GGMasters $1,050, $1M gtd in November for US$ 63,177. Two months later, GameOver placed 3rd at the same event for US$ 81,414. GameOver has over US$ 1.4 Million in GGNet total winnings. For Israeli runner up, “brino”, it was also a personal network high score of US$ 153,138. This was a sweet follow up to the six prior WSOPC High Roller side events final tables earlier in the series. Impressively. brino has pocketed over US$ 273K in these event collectively.

The $2K High Roller 6-Max No Limit Hold’em interested many of the world’s heavyweights. 779 ponied up for a prize pool of US$ 1,480,100. The top 116 places was littered with familiar names; just missing the final table and his bid for a third WSOPC ring was Swedish superstar Niklas Astedt. On the flipside, Lithuania’s Matas Cimbolas fired 8 bullets, the most by any player yet still failed to reach the money round.

The final table saw the return of Pablo Silva and DAVAIBANKROLL, both players sitting on their second ring event final table. Both players still couldn’t take it to the limit with the latter out in 8th place and Silva in 4th. Hungarian pro Andras Nemeth was a big favorite; the pro recently crushed EPT Prague with two big wins then grabbed his first ever Triton victory in Cyprus. Despite the rush, Nemeth could not conquer the online event, falling in 5th place. After Silva departedm the three-handed round was  grind as each player swung. A deal was later discussed then failed. In the end, it was Dutch pro Daniel “zafjeks” Reijmer emerging triumphant for his first ever WSOPC ring. In cash, Reijmer banked the US$ 233,574 first prize, his largest ever on the GG Network.

*Players that opt out of the live event will only receive the buy-in portion of the prize. The live event sponsorship will be paid out over a 12-month period.