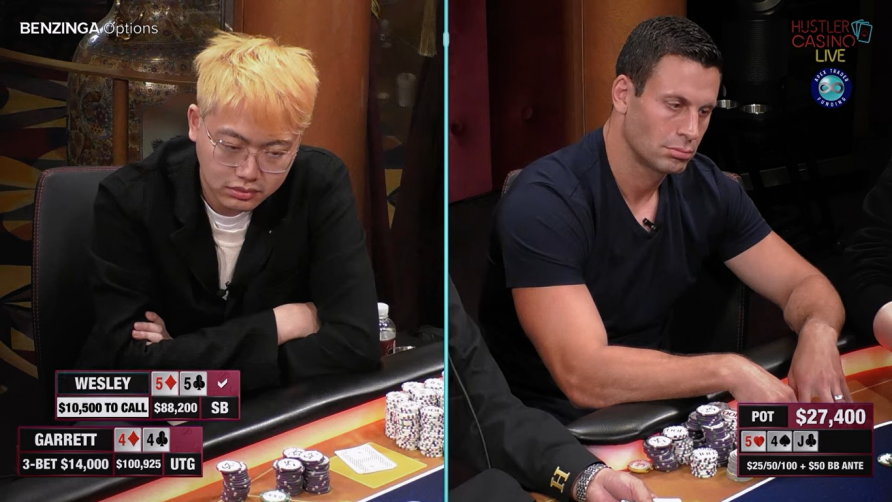 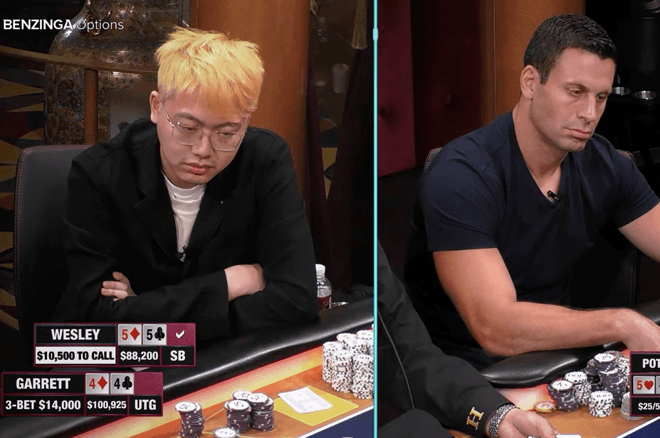 Poker is an easy game when the deck smacks you in the face over and over again like it did for Wesley Flan on Hustler Casino Live Wednesday night.

The supposed poker newbie (he says he’s only played for three months) turned $10,000 into $190,000 during the live-stream thanks in large part to some massive coolers, none more so than a set-over-set hand against Garrett Adelstein.

Hustler Casino Live recently hit 100,000 YouTube subscribers, and it’s because of exciting games like viewers witnessed Wednesday night. You can watch a condensed version of Wesley’s heater below.

The crypto enthusiast, who had around $7,500 when the first hand began, limped for $50 with

under the gun. Adelstein called with

on the button, Zeo called

in the small blind, and Boris checked

from the big blind.

, hitting four players. Boris bet out $250 with a flush draw and then Eli called with top pair before Wesley, who flopped a straight, popped it to $1,000. Both Boris and Eli made the call to see the

on the turn. Wesley this time took the initiative to bet — $2,100. After Boris called, Eli raised to $7,400 drawing dead, essentially an all-in bet. Following Wesley’s call, Boris made the call getting 4:1 odds on a straight and flush draw, but missed when the

appeared on the river.

That $24,000 pot was just the start of the rise to $190k. After winning a few pots to reach $33,000, Wesley flopped top two pair against Beanz, who had a gut-shot straight draw. He then turned a full house and won an $18,000 pot after his opponent bluffed off a sizable amount.

With the stack up to $38,000, he was able to force Hustler Casino Live co-owner Nick Vertucci to fold middle two pair with bottom two pair and took down a $10,000 pot. Moments later, he opened from late position on a straddled hand to $400 with

and was called by the

of Beanz in the small blind.

Both players watched the flop come out

and the preflop aggressor continued for $400, which didn’t convince the king-high to fold. The turn was the

, giving the small blind an open-ended straight draw, so he led out this time for a small $400 wager, only to have his opponent raise it up to $1,500.

Beanz wasn’t about to fold his draw, so he called and then hit his straight on the

river. The only problem for him was that the river card gave his opponent aces full. Still, Beanz bet out $5,000 and then was raised all-in for $25,000 effective. Even with the board paired, Beanz snap-called and lost the $65,000 pot.

Hand of the Day 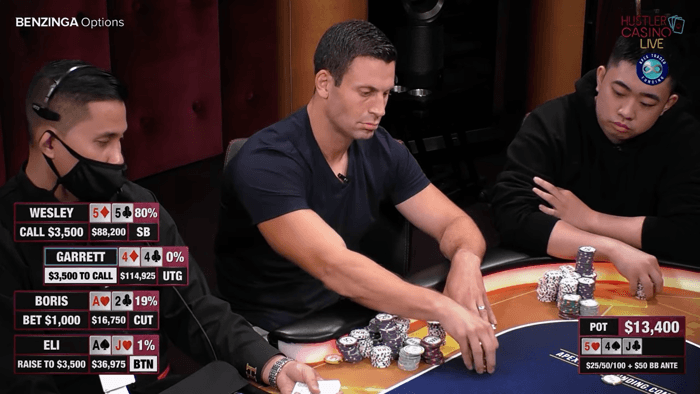 Adelstein, who lost a $440,000 pot to Daniel Negreanu during this week’s High Stakes Poker episode, was responsible for about half of Wesley’s $180,000 profit.

In the most memorable hand of the evening, Adelstein raised from under the gun to $300 with

. Boris called in late position with

, and then Eli three-bet on the button with

. Wesley made the call with

in the small blind, as did Adelstein and Boris.

, creating a set-over-set-over-top pair situation. Action checked to Boris, who flopped a wheel draw, and he surprisingly bet out $1,000. Eli raised to $3,500, and Wesley made the call. Adelstein, however, popped it to $14,000, and everyone folded other than Wesley, who just called with middle set.

appeared on the turn, both players checked and then the

came on the river. Adelstein made one of his patented over-bets, and put his opponent all in for about $77,000.

Wesley didn’t snap-call, and took nearly three minutes to call. When he did flip his cards over, he collected a $193,300 pot, effectively getting a 1,900% return on his investment in just five hours. He likely never received that sort of ROI from crypto in one day.

Adelstein finished the session down $95,000, mostly due to the set-over-set cooler. Other than Wesley, Vertucci was the only other winner in the game — $32,000.