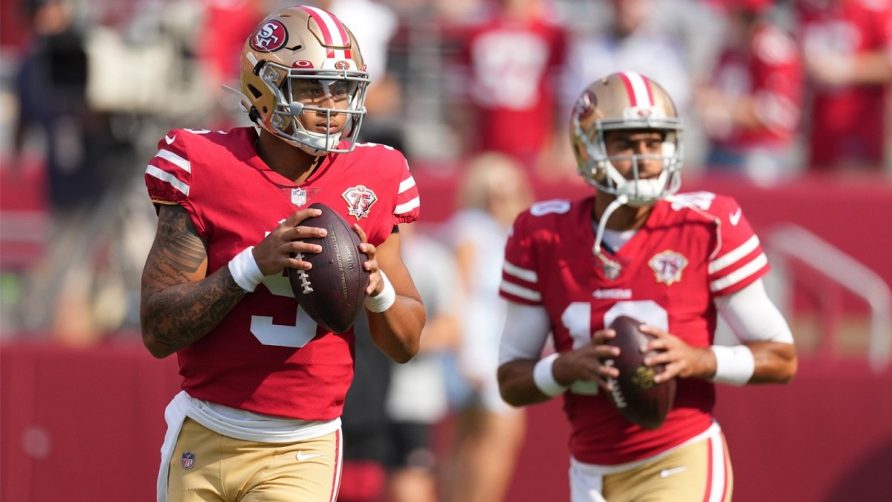 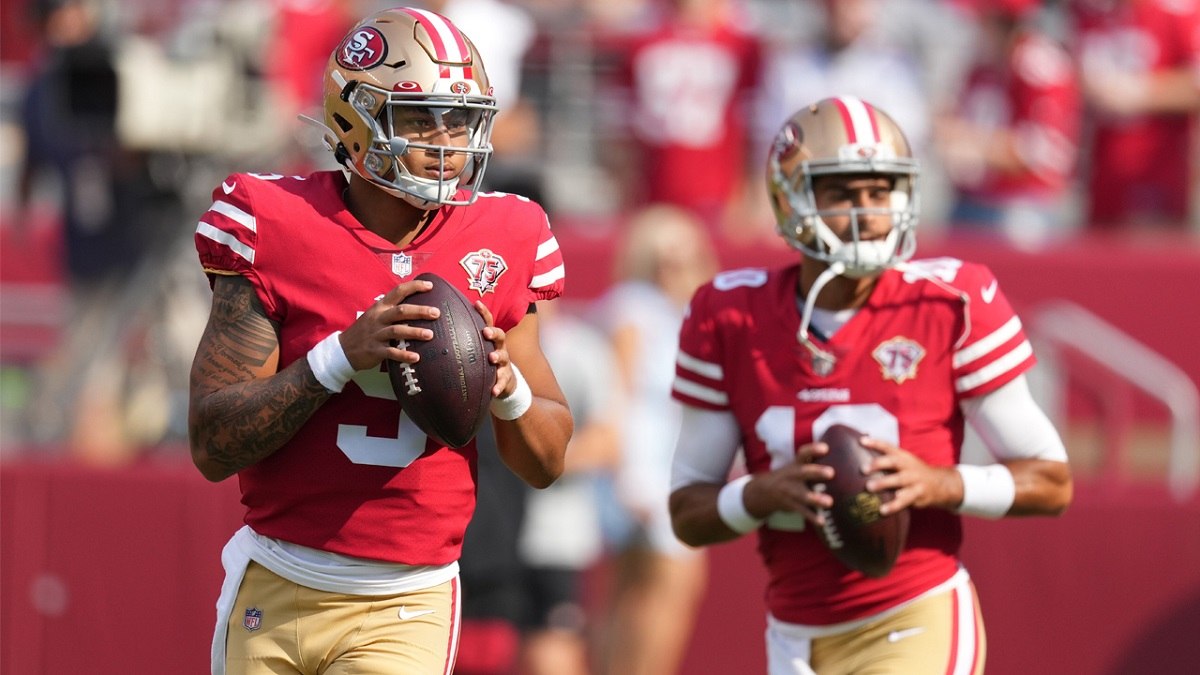 Jimmy G underwent right shoulder surgery and will be out for a couple of more months before he begins rehab. All signs point toward San Francisco trading Jimmy G, even though they weren’t active in the trade market during the last couple of weeks when several teams acquired new quarterbacks, including blockbuster deals for Russell Wilson and Deshaun Watson.

Which QB Will Take First Snap for SF 49ers in Week 1?

For now, Jimmy G remains with the 49ers and you have a chance to place a wager on a prop bet on whether he’ll get tapped as the starter if the 49ers don’t trade him before the season begins.

The 49ers are +1400 odds to win Super Bowl 57 and are sixth on the NFL futures board over at DraftKings.

Last month, there was a strong rumor that the Washington Commanders were interested in securing Jimmy G in a trade after several outlets reported the Commanders whiffed in an attempt to acquire Wilson in a trade. They sent a trade package to the Seahawks, which was rejected. Instead, the Seahawks traded Wilson to the Denver Broncos who were in search of a high-end quarterback after Aaron Rodgers decided to return to the Green Bay Packers thanks to a $200 million contract.

The Indianapolis Colts were also mentioned in Jimmy G trade rumors, but they snagged Matt Ryan in a trade with the Atlanta Falcons.

Perhaps teams were scared off by the lengthy timetable for Jimmy G to recover from his shoulder surgery. It’s more likely that the 49ers weren’t going to give Jimmy G up for peanuts and aren’t in a rush to trade him.

“Jimmy gets his surgery and we can’t upgrade our team by getting some good picks until people feel good about that surgery, and I’m all right with that,” said 49ers coach Kyle Shanahan. “We’re not just getting rid of him to get rid of him.”

The 49ers could wait until the season begins and wait for the NFL quarterback attrition rates to kick in after several teams lose starters to injuries. Then again, if the 49ers keep Jimmy G, they’ll have an insurance policy with two starters.

“If we can’t upgrade our team in another way, we’re not just going to get rid of a good quarterback because we have other quarterbacks on the roster,” said Shanahan. “Quarterbacks are really hard to come by. Some teams don’t have any, and we have three that we’re happy with, which is a good thing.”

The 49ers traded up with the Miami Dolphins in the 2021 NFL Draft to grab Trey Lance with the third-overall pick. They had to cough up multiple first-round draft picks, but the 49ers thought the gamble was worth it to acquire Lance, whom they believe could become the next franchise quarterback.

The 49ers bucked modern thinking and didn’t throw their untested rookie quarterback into action. Shanahan held Lance back until he was better prepared. He also had the luxury of waiting because Jimmy G was already a capable starter. More importantly, Jimmy G remained professional about the situation and gladly mentored Lance. A lot of veteran quarterbacks could have been jerkoffs about grooming their own replacement, but that’s a testament to Jimmy G’s character.

“We brought Trey here to be that eventually, and I think that will be sooner than later,” added Shanahan. “Jimmy is a good player that we all really like as a person and as a teammate, and we’re going to wait to see whatever helps the Niners the most.”

Lance went 1-1 as a starter. He completed 41 passes for 603 yards, five touchdowns, and two interceptions. He also carried the ball 38 times for 168 yards and one rushing touchdown.

Shanahan’s comments suggest that Lance will be the starter in Week 1, which is why Jimmy G is an underdog in the 49ers’ Week 1 quarterback prop bet.