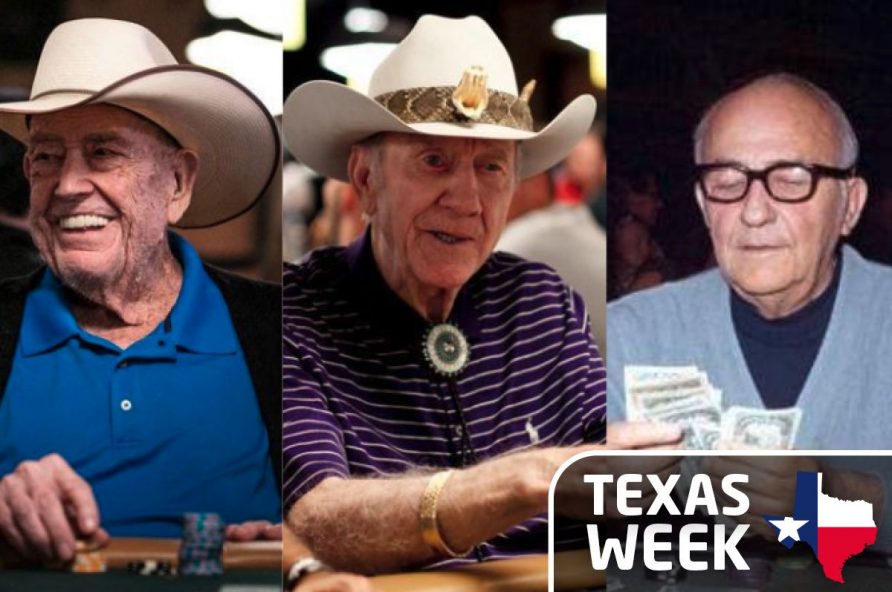 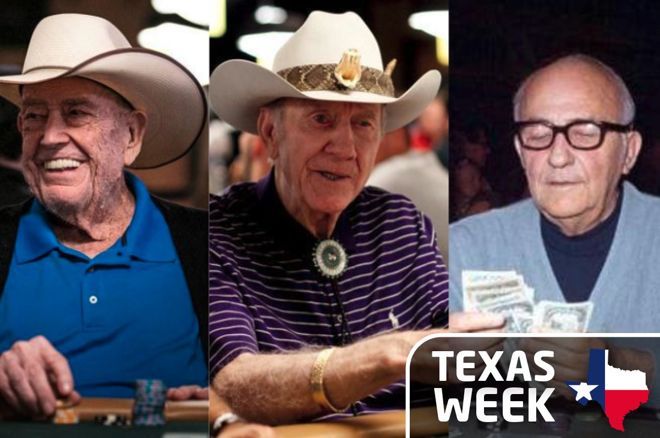 Poker games in Texas were a lot harder to come by in the mid-1900s than they are today. At the time, most of the action in the country could be found on the Texas Circuit, which “consisted of thirty or forty towns around Texas and the South where poker games were held regularly,” according to poker legend and Texas native Doyle Brunson.

Brunson is one of many now-Poker Hall of Famers who got their start on the Texas Circuit, grinding out games in small towns throughout Texas, Oklahoma, Louisiana, New Mexico, Alabama and other southern states.

But these poker games weren’t like most games today. Players on the Texas Circuit didn’t only have to worry about taking a bad beat or losing a buy-in, but also getting cheated, robbed, arrested or killed.

Learn more about poker in texas

“Anytime there was a lot of money involved, somebody was going to try to get it,” Brunson recalled in his autobiography Godfather of Poker. “Killers, con artists, cheats and thieves were a fixture of the gambling landscape … (in) Texas and the South. The foremost threat was getting hijacked, which usually meant getting robbed at gunpoint.”

The “nucleus” of players who grinded the dangerous Texas Circuit in the late 1950s and early 1960s were known as road gamblers, the earliest of poker pros who, as Brunson put it, “traveled to wherever the action could be found.”

In honor of PokerNews’ Texas Week, here is a look at seven most legendary Texas road gamblers, from the proposition bet-obsessed Thomas “Amarillo Slim” Preston to the sharp-dressed Crandell Addington.

The first player on this list needs no introduction and supplied much of the source material for this article. The “Godfather of Poker,” Doyle Brunson emerged on the Texas Circuit in 1958 after retiring from the infamous mafia-linked poker games on Exchange Avenue and Jacksboro Highway in Fort Worth.

Brunson left the games in Fort Worth and headed for a “fresh start” in the Midland and Odessa area in West Texas “and the good poker games there.” 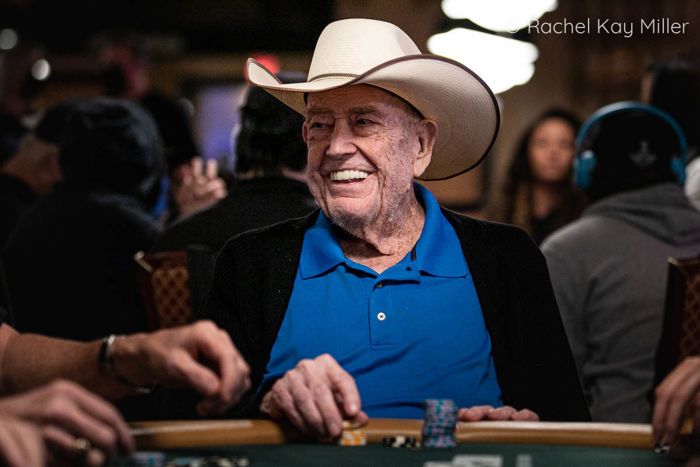 But life on the road was equally challenging, and the poker godfather has no shortage of stories about his road gambling days about getting cheated, held at gunpoint or taking down massive pots. In his autobiography, Brunson tells the story of a game at a farmhouse in Austin that “was interrupted by the sounds of windows shattering and doors bursting open.”

“Seven guys with ski masks and shotguns rushed in. Nobody had a chance to escape,” Brunson said. “The robbers herded us up against a wall and ordered us to drop our lower garments — all of them.”

Brunson also recounts a hand played against Johnny Moss that he called “the most important hand in my early poker career” that took place during a three-day poker marathon in Brenham.

“I was holding (jack-ten) offsuit on a board of

,” recalled Brunson. “I had none of that board, but when Moss bet $4,000, a monstrous wager in that game, I called him with just a jack high! I was sure he was drawing to some kind of straight, and since I was drawing to the highest one possible, I felt I had to have him beat … There was a lot of money in the pot, but I had a read on Johnny.”

Moss showed a busted straight draw with six-five and Brunson took down the pot in the “breakthrough” hand.

“That one hand defined the moment where I knew I was a top player, and from that point on, I was considered a world-class player by many of my peers,” reflects Brunson.

And those are just a few of “Texas Dolly’s” stories from his iconic years as a Texas road gambler. 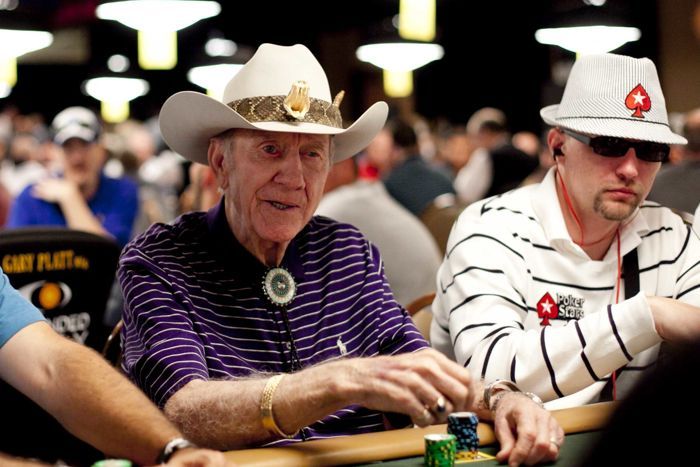 The trio formed a partnership based out of Odessa, playing off of the same bankroll and sharing the same wins and losses, and protecting one another as they traveled across the treacherous Texas Circuit.

“We watched out after each other,” said Brunson. “There was a lot of danger on the road; and with the three of us, we were more protected than if we went solo.”

By all accounts, Slim was a prolific prop bettor who never passed up an opportunity to wager on something, such as betting that he could beat tennis champion Bobby Riggs in table tennis using frying pans instead of paddles; or that he could beat billiards pro Minnesota Fats in pool using a broomstick.

Many of Slim’s hustles are docmented in his memoir Amarillo Slim in a World Full of Fat People. His victims included country musician Willie Nelson, who he beat out of $300,000 in dominoes, and Hustler publisher Larry Flynt, who he took for $2 million in poker.

“If there’s anything worth arguing about, I’ll either bet on it or shut up,” wrote Slim. “And since it’s not very becoming for a cowboy to be arguing, I’ve made a few wagers in my day.”

Slim’s reputation as a poker player, pool player prop bettor and overall hustler make him one of the most legendary road gamblers of all time.

Bryan “Sailor” Roberts of San Angelo made up the final piece of Brunson’s road gambling crew that tore up games throughout the south.

“With guys like Sailor and Slim, dull moments didn’t exist,” wrote Brunson. “They were two of the most colorful guys I’ve ever met.” 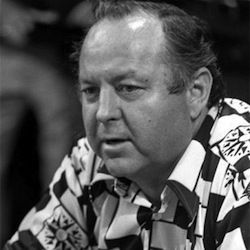 Roberts in particular had his share of colorful moments. Brunson told the tale of a poker game on Fort Worth’s Exchange Avenue that got held up by hijackers pretending to be police officers. Roberts was in a pot and politely asked the intruders to let him finish the hand — which they did.

An avid gambler and partier, it didn’t take a robbery to separate Roberts from his winnings. After a sports betting heater that left him with $90,000, he “took his money and went partying with the girls.”

“When he wasn’t losing his money, he was giving it away,” according to Brunson. “Naturally, all his money was soon gone, which bothered him not at all.”

Brunson also acknowledged Roberts was an excellent poker player on par with himself: “Sailor was maybe as good as I was when he set his mind to it, but he was more interested in girls than gambling.”

Nine-time WSOP bracelet winner Johnny Moss was already an established name on the Texas Circuit when Brunson, Slim and Roberts entered the scene.

Moss, who was born in Marshall in 1906, got his start in poker as a “cheat catcher” employed to watch players at the table, a skill that undoubtedly became useful when he took up the game and began a career as a road gambler. 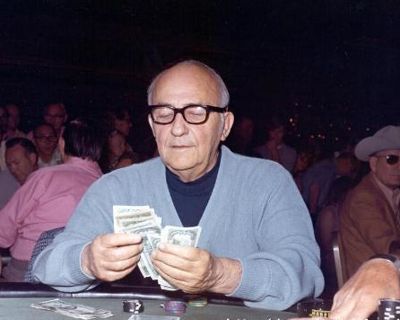 “After I got money I started to carry a gun … The road was real rough in them days goin’ from town to town,” Moss told the writer Jon Bradshaw for the book Fast Company. “You always had to worry about hijackers and the Rangers. All those road gamblers and thieves and cheaters. You have to know them cheaters in advance. I got me a rundown on most of ‘em. They never slipped up on the blind side of me.”

“The Grand Old Man of Poker” is also the subject of various poker legends and myths, including a high stakes heads-up match between himself and Nick “the Greek” Dandolos in Las Vegas.

Moss passed away in 1995 and is laid to rest in Odessa, where PokerNews recently visited as a part of our weeklong Texas Road Trip. 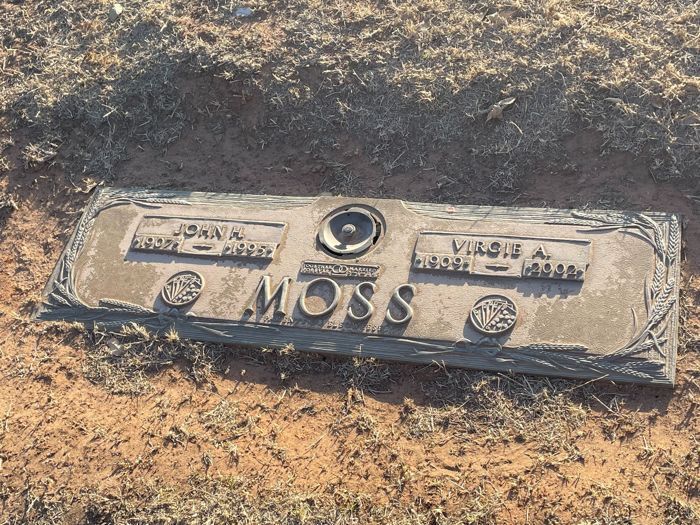 The resting place of Johnny Moss & his wife, Virgie.

Before taking down the 1982 WSOP Main Event or getting inducted into the Poker Hall of Fame in 1988, Jack “Treetop” Straus was a road gambler who traveled across the south playing in whatever poker games he could find.

Straus, a six-foot-six Texan who is credited with spawning the phrase “All you need is a chip and a chair” after climbing back from a single chip to win the 1982 Main Event, was described by Brunson as “not only the most entertaining person I’ve ever been around, but an uncommonly creative soul, especially when it came to dodging debts.” 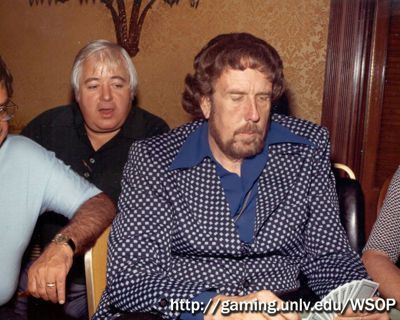 “Jack compulsively bet on everything, with or without a pulse — everything he could lay a bet on — which was the reason he was broke all his life even though he won a lot of money,” said Brunson.

Like the stuff of poker legend, Straus died in 1988 after suffering an aortic aneurysm while playing a high stakes poker game at the Bicycle Casino in Los Angeles. He was laid to rest in Austin, Texas. 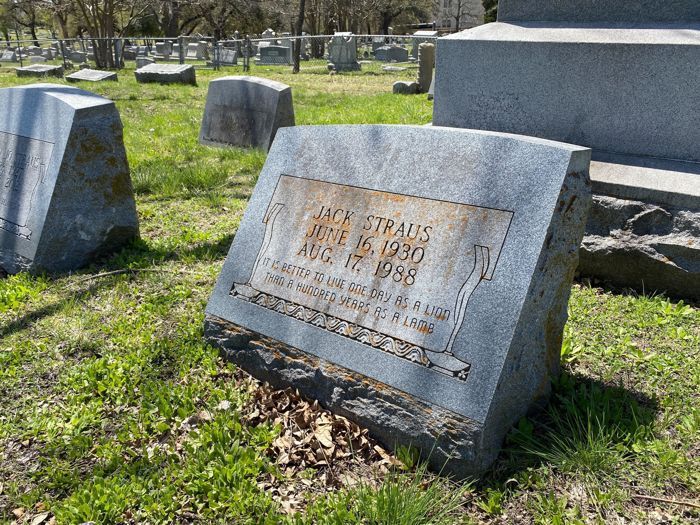 The final resting place of Jack Straus in Austin, Texas.

The snazzy Crandell Addington was another character on the Texas Circuit, known both for his no-limit Hold’em prowess and always being the best-dressed player at the table.

“Crandell stood out from the crowd because he was always dressed in fancy clothing, like he was some movie star,” according to Brunson. “He liked to wear expensive cowboy boots, immaculate Western outfits, and a top-line Stetson (cowboy hat).” 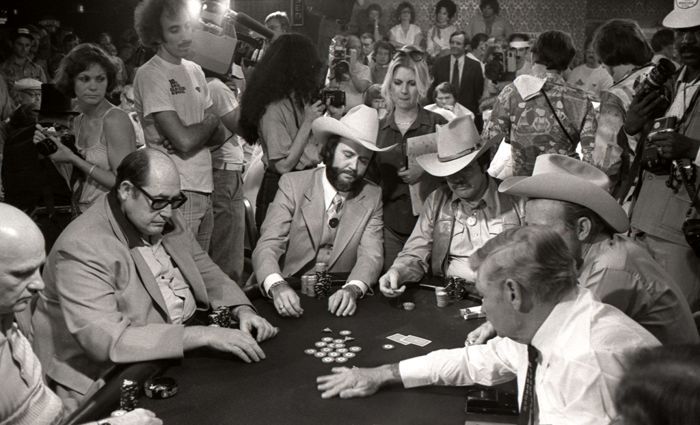 Addington, of San Antonio, essentially retired from poker in the 1980s but reflects fondly on his memories with the game, including his years as a road gambler in the south.

“From a historical standpoint, I guess probably Doyle (Brunson) and I are the last of the Texas road gamblers still around to give you a bit of history,” Addington told PokerNews in 2020.

In 1969, Addington was declared “Mr. Outside” for being the best road gambler in a poker tournament, earning him a clear spot on this list.

A lesser-known player on this list is Bob Hooks, a Texas road gambler who later worked as the poker room manager at Binion’s Horseshoe during the first WSOP.

Hooks became a road gambler during his early 20s and “developed a reputation as a solid player, and before long some of the game’s best took notice,” as PokerNews reported in 2013. 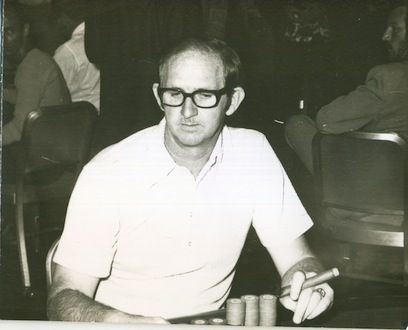 After his road gambling days in Texas, Hooks finished second in the 1975 WSOP Main Event to none other than roommate and fellow road gambler Roberts, who won the title and $210,000.

While he didn’t get the glory that comes with being a Main Event champion, he did strike a deal with Roberts that left him with half of the prize money.

Other legendary Texas road gamblers who are worth mentioning include Doc Ramsey, Felton “Corky” McCorquodale, Aubrey Day and Bill Smith.