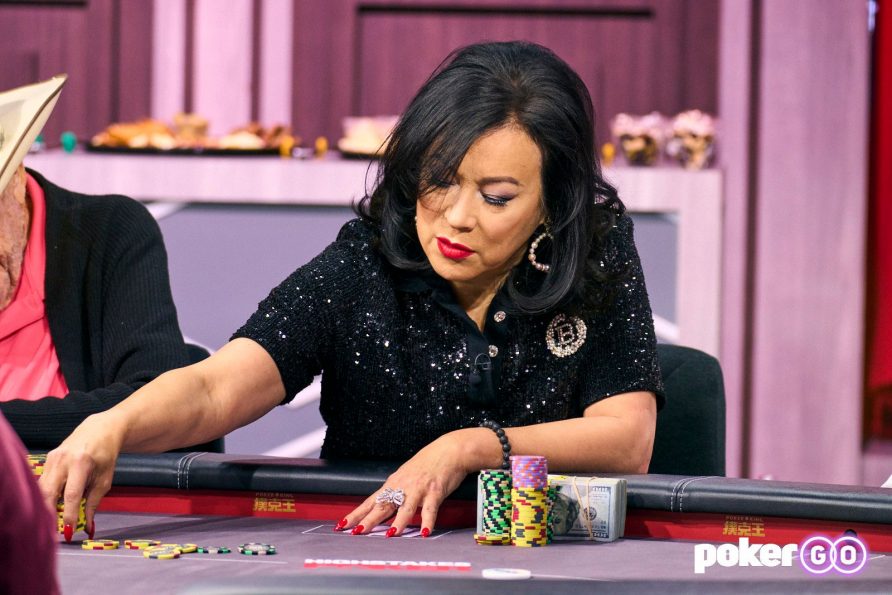 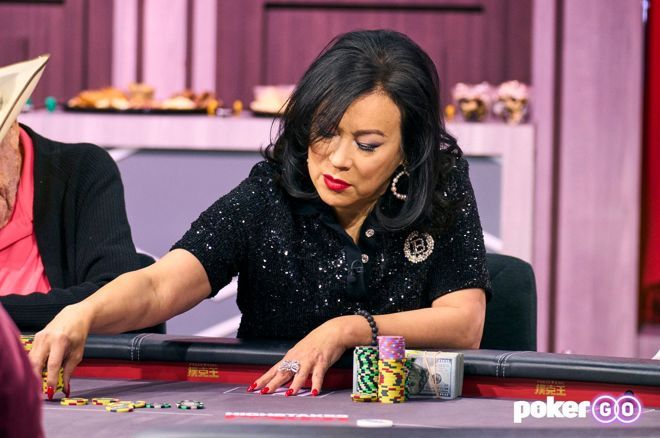 Stack sizes are getting big on High Stakes Poker and the pots are beginning to hit six figures thanks to the loose-aggressive play of actress Jennifer Tilly, who found herself in some tricky situations during Episode 5 of Season 9.

The show aired on PokerGO Monday evening with the same table returning from the previous episode. Here are the stack sizes when the show began: 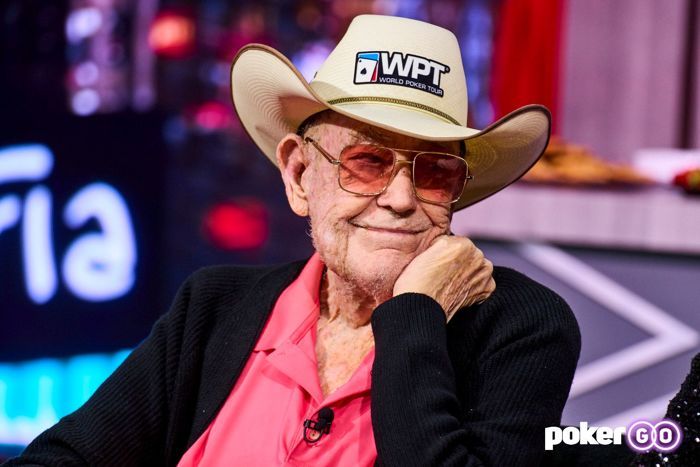 Right off the bat on Episode 5, Tilly was put to the test. Doyle Brunson, the 88-year-old poker legend, made an “un-Doyle-like play,” according to High Stakes Poker commentator AJ Benza in the first hand of the show.

Brunson limped in early position with

before Patrik Antonius found a real hand on the button —

and all three players checked to see the

on the turn. Brunson checked, Tilly bet $3,000 with top pair, Antonius folded. And then Doyle was feeling a bit frisky, so he went for a check-raise to $15,000 with air. That didn’t scare his opponent off the pot, and both players saw the

The 10-time WSOP bracelet winner continued his story, this time betting $26,000 on a stone-cold bluff. Tilly, who starred in the hit horror flick ‘Child’s Play,’ came to the conclusion that top pair was too good to fold, and she took down a pot of $90,000.

“Texas Dolly” Gets Chips Back on Lucky Flop Vs. Adelstein 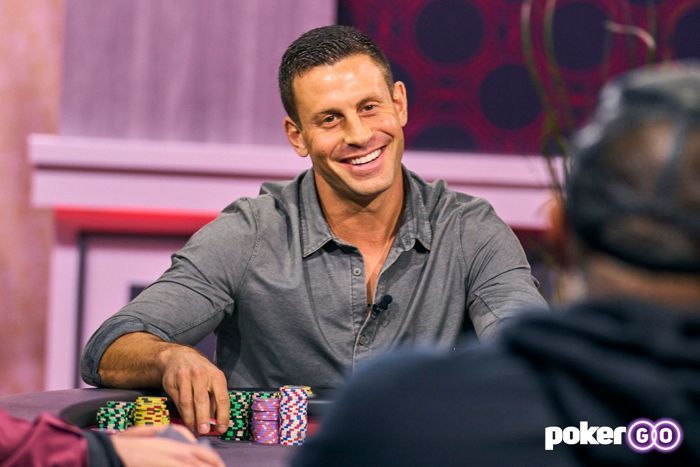 Moments later, “Texas Dolly” didn’t need a bluff to go his way to win a big pot. After Garrett Adelstein, a Los Angeles high-stakes poker legend, raised to $1,200 from early position with

Brunson made the call in position with the

against those two players, as did Tilly, holding

on the turn. Adelstein checked this time, while Doyle moved all in for around $55,000. Following a brief pause, Adelstein called and both players agreed to run it twice.

The first river was the

, giving Doyle a full house, and the second one was the 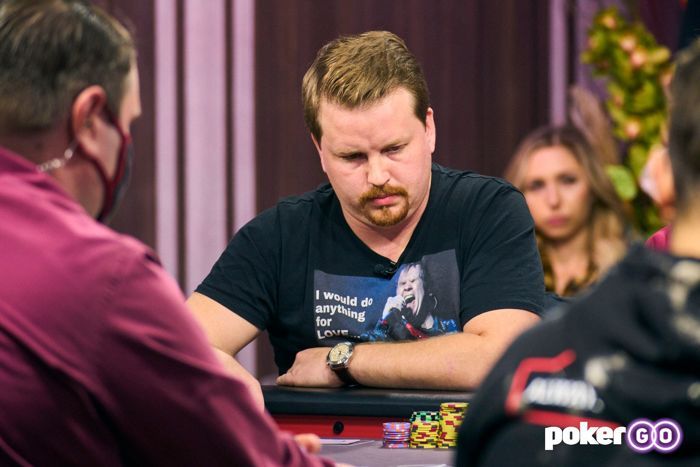 Kim Hultman, a popular casino streamer from the YouTube channel “LetsGiveItASpin,” played a monster pot against Tilly, and this time Phil Laak’s longtime girlfriend may have overplayed her hand.

before Tilly raised in middle position to $3,000 with

on the button, made the call, as did “durrrr.”

The juicy flop came out

, smacking Tilly and Hultman in the face. Tilly bet out $5,000 only for the casino streamer to pop it to $17,000. With top pair and a decent kicker, the Academy Award-nominated actress reraised to $50,000 and her opponent called.

appeared on the turn, Tilly checked and Hultman wasn’t concerned with the potential flush out there, so he fired out $50,000. He received a call and then the

flipped over on the river, giving Tilly two pair against a set.

Hultman, with about $75,000 behind, moved all in. Tilly, who acknowledged she could only beat a bluff, was unable to get away from the hand and lost a $367,200 pot, the largest thus far on High Stakes Poker Season 9. 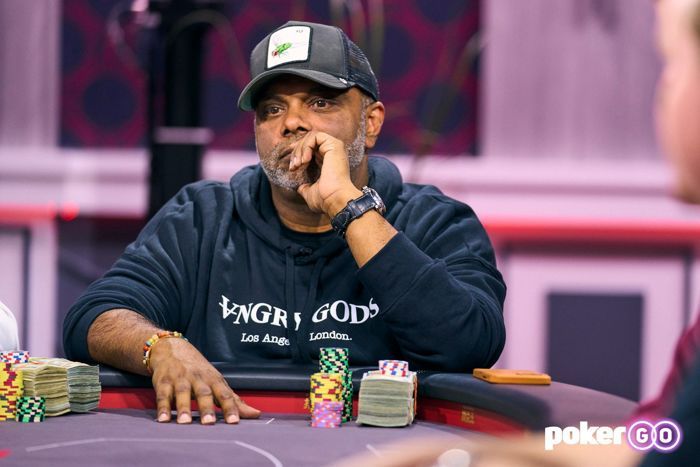 Krish Menon, a regular in the big games on Hustler Casino Live, gave it the old college try with

, attempting to bluff the loosest player at the table.

Tilly would again play a monster pot against an HCL regular. She straddled to $800 and Adelstein raised

in late position. Action folded to the actress who decided to just call with the

and Tilly checked her over pair to her opponent who made a $2,000 wager. Both players then saw the

on the turn. Action checked back to Adelstein’s full house, and he bet $8,000 and received a call.

and this time Tilly led out for $15,000. Adelstein, noticing that his opponent had been calling off large-sized bets, made a massive raise to $100,000. Tilly wasn’t able to put him on a weaker hand than pocket queens, so she made the call and lost a $234,000 pot.

Episode 6 will air at 5 p.m. PT next Monday on PokerGO. Fans can watch every episode, past and present, on-demand by purchasing a PokerGO subscription. We’ll get to see next week if Adelstein was being too hard on himself or if his play wasn’t up to the quality his fans are accustomed to seeing.