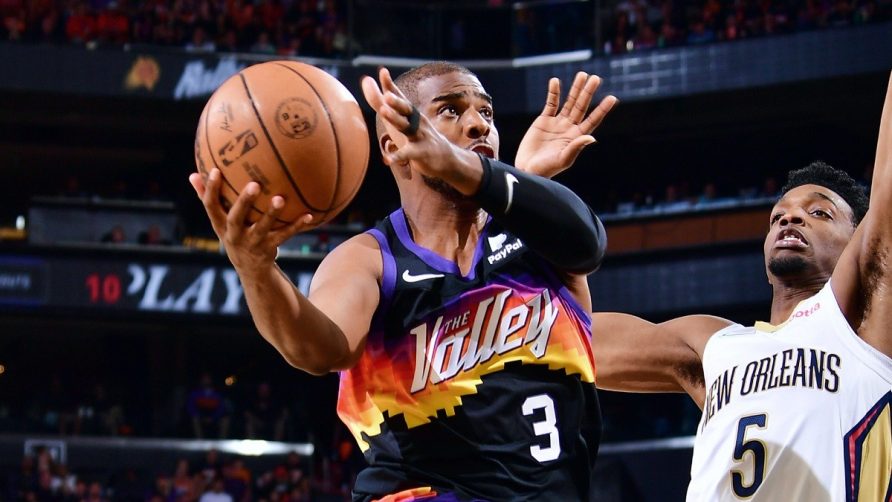 With eight teams starting the second round of the 2022 NBA Playoffs, the Phoenix Suns are the slight betting favorite to win the championship at +290 odds, ahead of the Golden State Warriors at +300 odds, and the Boston Celtics at +330 odds. 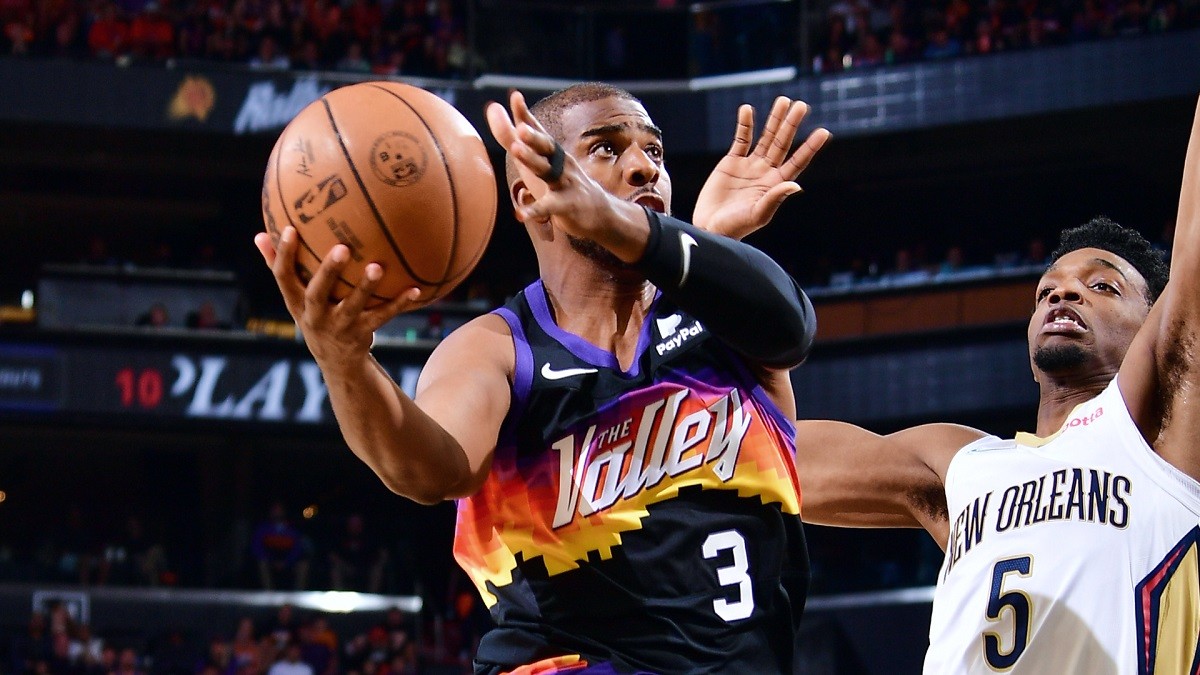 Chris Paul from the Phoenix Suns drives the lane against the New Orleans Pelicans in the first round of the 2022 NBA Playoffs. (Image: Getty)

The defending champion Milwaukee Bucks are +900 odds to win back-to-back titles, but are not among the top four betting teams after they lost starting small forward Khris Middleton to an MCL sprain.

The first round of the playoffs ended with only one 4-0 sweep, but zero instances of a Game 7 or a seven-game series.

With Devin Booker back in the lineup, the Suns returned to the top of the NBA futures board. The Suns opened the season at +1700 odds to win the championship, even though they were the runner up at the 2021 NBA Finals. The Suns jumped out of the gate with a hot start and never looked back. They emerged as the betting favorite halfway through the season and remained at the front of the back in the second half of the season.

The Suns snagged the #1 seed in the Western Conference and were +200 odds to win the title at the start of the playoffs, but they were passed by the Golden State Warriors and Boston Celtics when Booker was sidelined by a hamstring injury in Game 2 of their series against the New Orleans Pelicans. The Pelicans gave the Suns a good fight before Booker returned in Game 6 and the Suns finally landed a knock-out blow.

In the Western Conference Semifinals, the Suns meet the #4 Dallas Mavs, but the Suns are -300 odds to win the series. You can back the Suns right now to win the championship at +290 odds.

Steph Curry no longer has a minutes restriction with the #3 Golden State Warriors, so expect to see a lot more of their “Death Lineup” against the #2 Memphis Grizzlies in the Western Conference Semifinals. Jordan Poole emerged as a legit scoring threat and the third Splash Brother during his sensational run in the first round against the Denver Nuggets. The Warriors were the betting favorite to win the championship for a hot minute last week, but they offer up enticing odds at +300. The Warriors are -265 odds to win their series against the Grizzlies, which begins Sunday with Game 1 in Memphis.

The #2 Boston Celtics swept the #8 Brooklyn Nets and impressed a lot of doubters along the way. There’s still a few haters out there that feel the Nets were heavily overrated, so in their eyes, the Celtics beat up on a paper-tiger squad.

The Celtics meet the short-handed defending champs, but they still have to slow down the Greek Freak. If there’s any team that’s up for the challenge, it’s the Celtics. The top defensive unit in the NBA slowed down Kevin Durant and harassed him with an avalanche of double teams and triple teams. The Celtics also got a huge boost with Robert Williams III back in the lineup. They’ll need RW3 to help contain the Greek Freak. Aside from the few haters out there, the Celtics are a popular pick to win the championship at +330 odds after they demolished the Nets.

The #1 Miami Heat seek a second trip to the NBA Finals in the last three seasons. Despite posting the best record in the Eastern Conference this season, the Heat flew under the radar of bettors. The Heat knocked out the #8 in five games and shut down Trae Young. In the Eastern Conference Semifinals, the Heat caught a break and face the #4 Philadelphia 76ers without Joel Embiid. Embiid is out indefinitely with an orbital fracture and did not travel with the team to Miami. Out of the final eight teams, the Heat are the biggest favorite to win their series at -380 odds versus the 76ers.

The Heat are +550 odds to win the championship, but Kyle Lowry is nursing a hamstring injury, but Jimmy Butler said he’s ready to play despite a sore knee. Victor Oladipo logged significant minutes in Game 5 to clinch the series against the Hawks. Oladipo has been plagued with injuries the last few seasons, but the Heat could definitely use a healthy Oladipo, especially with Lowry banged up.

Head coach Mike Budenholzer decided to roll the dice with a bigger lineup when Khris Middleton went down with a knee injury in Game 2 against the Chicago Bulls. With Bobby Portis in the starting lineup, the Bucks won three games in a row. Grayson Allen, the ex-Duke star and most hated player in the NBA, played extremely well off the bench in the first round. He helped pick up some of Middleton’s scoring slack. It’s one thing to pick off the Bulls in the first round because the Bucks completely owned them the last couple of years. However, the Greek Freak and the #3 Bucks face their biggest challenge to date with the #2 Celtics.

The Bucks are +175 odds to win the series and pull off an upset against the Celtics. If they can knock off the Celtics without Middleton, then they can probably run the table and win the whole shebang with a chance Middleton returns in the East Finals or NBA Finals.

Ja Morant and the high-flying Memphis Grizzlies and secured the #2 seed as the second-best team in the NBA this season. The Grizzlies defeated the #7 Minnesota Timberwolves in six games during a sensational first-round series that was easily the most entertaining compared to the other seven matchups, with the Grizzlies securing three  comeback victories after falling behind in the fourth quarter.

Morant and the Grizzlies now have a difficult matchup against Curry and the #3 Golden State Warriors. They host Game 1 in Memphis on Sunday, but it’s a quick turnaround after winning Game 6 in Minneapolis on Friday night. The Grizzlies are +215 odds to pull off an upset in the Western Conference Semifinals and knock out the Warriors. The bookies or public do not have much faith in the Grizzlies to win the championship at +1300 odds.

Luka Doncic (calf strain) missed the first two games of the first-round series for the #4 Dallas Mavs against the #5 Utah Jazz, but they still managed to knock out the Jazz in six games. Doncic and the Mavs meet the top-ranked Suns in the Western Conference Semifinals, but the Mavs are +245 odds to knock out the defending conference champs. The Mavs are the second-biggest long shot on the futures board at +2200 odds to win the title.

Once the 76ers listed Embiid out indefinitely, their futures tanked. Embiid was one of the finalists for MVP this season along with Nikola Jokic, so it’s nearly impossible to replace someone like Embiid on short notice against the #1 seed. The 76ers are +310 odds to upset the Heat in the Eastern Conference Semifinals. The 76ers are the longest shot on the betting board at +3300 odds to win the championship and their title hopes are quickly circling the drain.