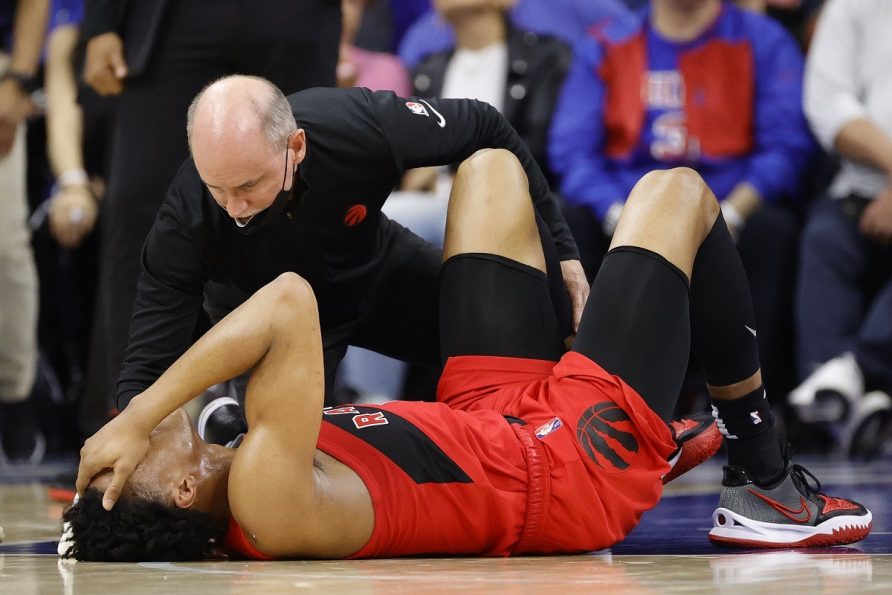 The #5 Toronto Raptors trail the #4 Philadelphia 76ers 1-0 in their opening round playoff series, but they got a batch of bad news heading into Game 2 with small forward Scottie Barnes out with an ankle injury, and shooting guard Gary Trent, Jr. is doubtful with a non-COVID illness. 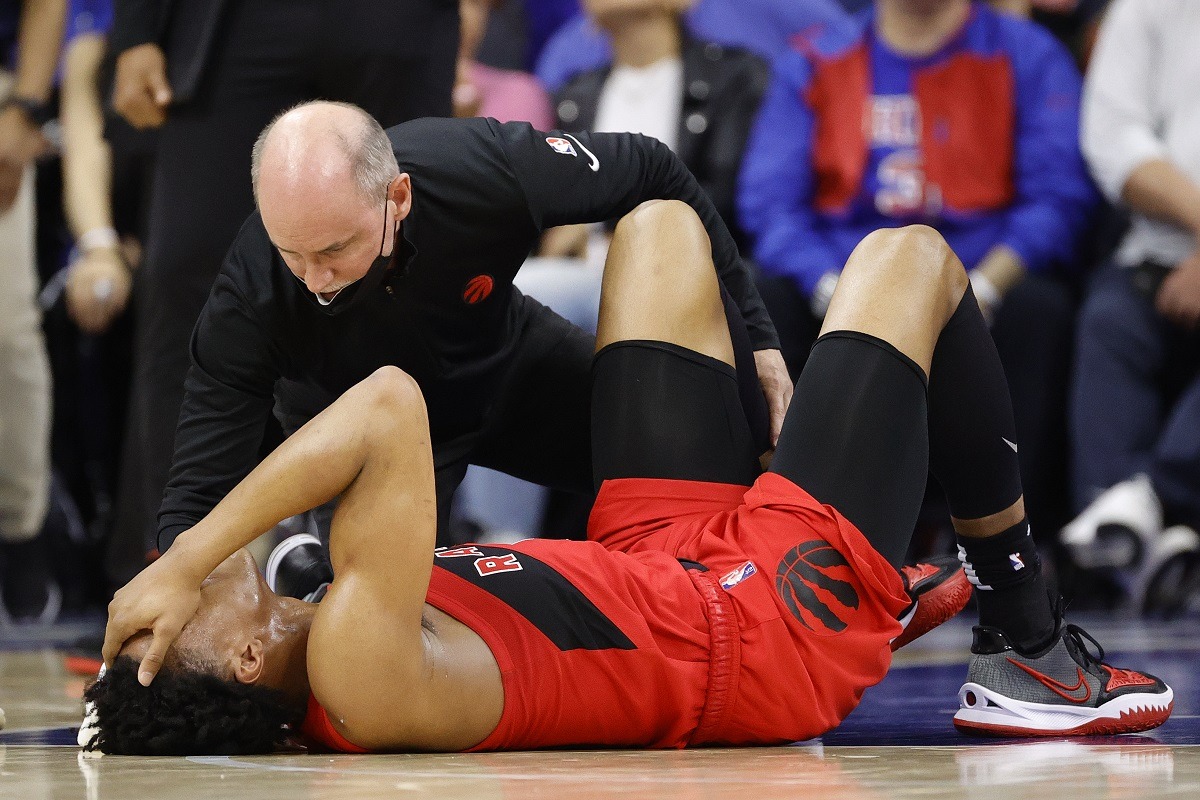 Medical staff attend to Scottie Barnes, a rookie forward with the Toronto Raptors, after he suffered an ankle injury in Game 1 against the Philadelphia 76ers.  (Image: Tim Nwachukwu/Getty)

In addition, Raptors backup power forward Thaddeus Young has a thumb injury and he’s also listed as doubtful for Game 2 against the 76ers in Philadelphia on Monday evening.

“Scottie’s out,” said Raptors head coach Nick Nurse. “Gary is not here for shootaround, he’s still doubtful. Thad has some damage there in his thumb. They are going to try to tape him up here today and see what it looks like here shootaround, but I would imagine he’s doubtful, too.”

The 76ers are -475 odds to win the series, according to a recent update by DraftKings. The Raptors are +340 odds to come from behind and knock out the 76ers.

Tyrese Maxey took control of Game 1 with a game-high 38 points for the 76ers. He shot 11-for-21 from the field and knocked down five 3-pointers.

“The only thing I’m going to remember is us winning,” said a humble Maxey.

Tobias Harris also added 26 points on 9-for-14 from the floor. Starters like Maxey and Harris need to have big games in the postseason when the opposing defenses key in on Joel Embiid and James Harden. Harden has been a huge supporter of Maxey since his arrival and encouraged the young guard to be aggressive.

“I saw growth, man,” said Harden. “I saw him from being up-and-down and not really having consistent minutes last year in the postseason to starting and having a huge role on a championship-contending team.”

In his first playoff game with the 76ers, Harden scored 22 points and dished 14 assists. Embiid scored 19 points and pulled down 15 rebounds in the win.

“It’s only one game,” said Embiid. “We need to do it three more times.”

Raptors Outgunned, No Love from Zebras

The Raptors were a popular sleeper pick to upset the 76ers in the opening-round of the playoffs. However, the Raptors just couldn’t get anything going right in Game 1 in Philly. As a team, the Raptors shot 40% from 3-pont range, but that was meaningless compared to the red-hot 76ers. The squad from Philly knocked down 50% of their treys on 16-for-32 from downtown. The 3-pointers whipped the crowd into a frenzy, which the 76ers fed off of, especially Maxey.

“Collectively as a team, we just didn’t match the intensity,” said Pascal Siakam.

Siakim led the Raptors with 24 points in the loss on an efficient 9-for-18 from the field. Fred VanVleet had a quiet night with just 18 points. He shot well from the floor with a 7-for-12 clip including 4-for-7 from 3-point range, but the 76ers did a good job limiting the sniper to just 12 attempted shots.

Barnes suffered a sprained ankle when Embiid accidentally stepped on his foot in the fourth quarter. He was done for the night at that point, and needed assistance getting to the locker room. The rookie still put up impressive stats with 15 points, 10 rebounds, and eight assists in 32 minutes of action. The Raptors will miss Barnes for Game 2 and hope he can return from his ankle injury when the series shifts to Toronto later this week.

The flu-ridden Trent shot 2-for-11 from the field including 3-for-7 from downtown for just nine points.

Nurse felt the officials were generous for the hometown team, especially with an over-exuberant Embiid.

“I don’t care if you’re 5-foot-11 and 160 pounds, if you beat him to the spot and he runs you over, it’s a foul,” said Nurse. “I thought he threw three or four elbows to the face. He got called for one. We’re going to stand in there.”