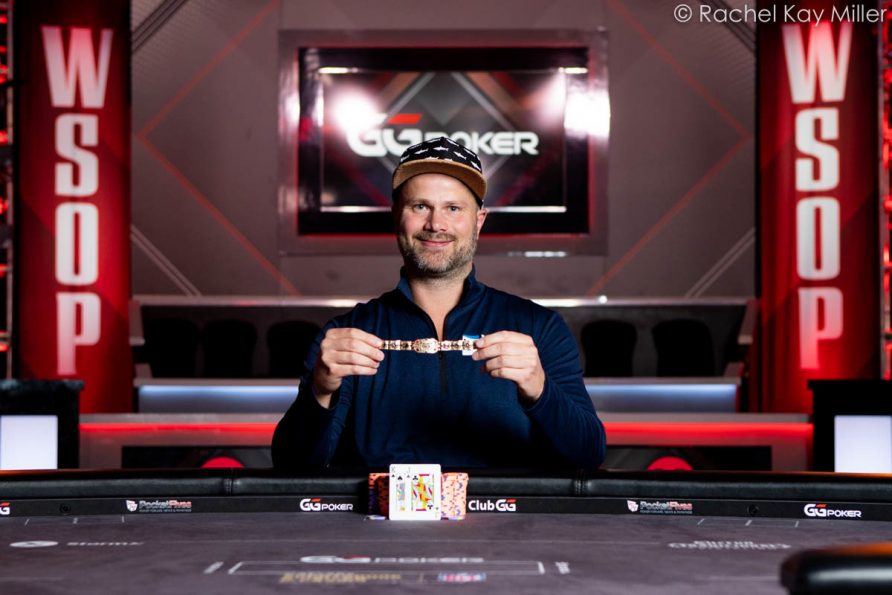 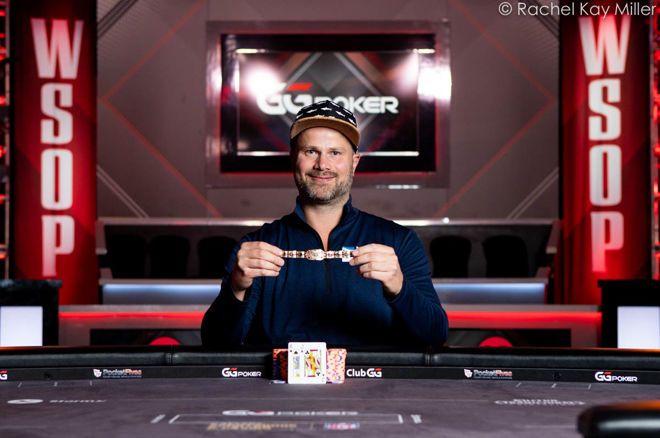 Alsup wasn’t even planning on playing this event as he wanted to play the mystery bounty at the Wynn, but Wazwaz convinced Alsup to play by saying “Come play with the fish.” We entered the day with 167 players remaining and the tournament crowned the 38-year-old professional Alsup champion at around 1:30am after over 13 hours of play.

Alsup was one of the chipleaders on the final two tables before taking a bad beat where he turned trips while Patrick Truong had a full house to become short. Alsup came into the short-stacked final table in the middle of the pack and managed to navigate through to come out victorious with the support of his baby shoe, which Alsup brought out especially on the final table to represent his four-month-old baby. 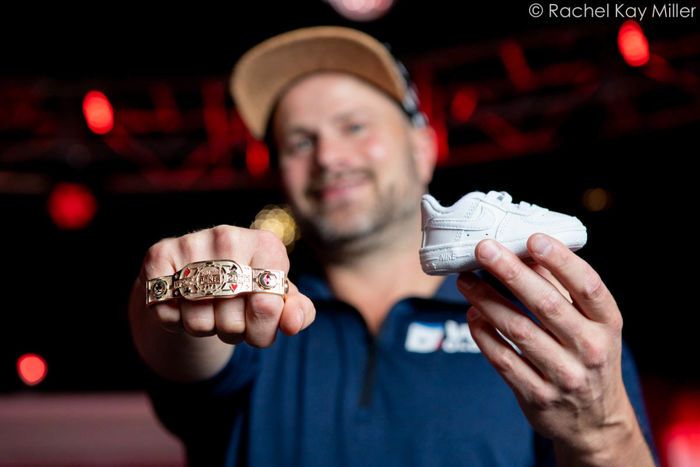 When asked how it feels to win his first bracelet, Alsup said, “It feels phenomenal. I haven’t really been a bracelet chaser but this one is really special. It feels really special because my travel buddy Rob Wazwaz won the same event a month before. The stars aligned, I wasn’t even going to play.”

On the bad beat mentioned above, Alsup said, “I could have easily went bust on that hand but I saved a few chips and it’s an old saying ‘A chip and a chair’ and I managed to spin it back up. It was just before dinner break, which allowed me some time to regroup. I had seven big blinds and I came back by stealing blinds a lot.”

Alsup already had over $1,500,000 in live tournament earnings, according to his Hendon Mob, which dated his first cash back to 2006 and was asked about his background in poker. Alsup said, “I first got introduced to poker when I was 12 years old. Me and the neighbour kid would play $0.01/$0.02 and play all through the night. I eventually started going to the local casino at Canterbury Park in Minnesota. In 2015 I saw these people were getting big scores in tournaments and I started to take that path. Cash games are great, but I’m in it for the big scores, titles and bracelets.”

Alsup has a four-month-old baby back home and spoke of the difficulties of being away. “I have a baby at home, and it’s been really hard being away from my family. I love my son and girlfriend so much that it’s tough to be away. I’m ready to get out of here, but this tournament of champions freeroll is trying to tempt me to stay.”

On the baby shoe at the final table, Alsup said, “I brought this (the shoe) because I had the idea to bring this in case I make a final table. I put this down on my cards as the final table started, and I said, ‘Watch out guys, I got that baby run good’. It’s magical, I feel like it brought me good luck.”

On the final table itself, Alsup said, “I didn’t do a lot of raise folding. It was tough five-handed. I had to battle with some amazing players like Ari Engel and others. There were a couple of tough situations with ICM implications, but I told myself I was here to win it. My buddy (Rob Wazwaz) won the bracelet. I’m going to win the bracelet.”

On the heads-up play against Brit Gary Whitehead Alsup said, “He was a great guy, but I probably didn’t think he’s played much heads-up. I didn’t want to get in a raising battle with him due to the stacks being shallow. I didn’t want to take any chances. I want to play small pots and play post-flop, which worked out really well in my favour.”

The final table started with the swift elimination of Donny Casho at the hands of Alsup as Casho was very short. Next to go was Frederich Brown as he lost a flip with his ace-king against Artem Metalidi’s queens.

Action was seven-handed for a while as Patrick Truong was eliminated as he was short after losing a cooler to two-time bracelet winner Ari Engel with his queens against Engel’s pocket tens. Alsup would finish him off. 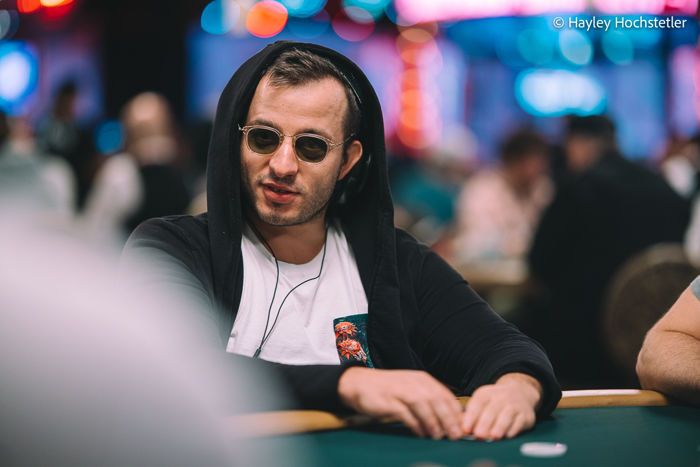 Ukrainian pro Metalidi was next to go as Engel took him down blind vs blind before Irishman Marc MacDonnell followed him to the rails quite sometime later as Whitehead eliminated him.

Things heated up three-handed where Engel was using aggression to steal blinds before his ace-queen was bested by Alsup’s king-jack, which took the action to heads-up.

The battle between Alsup and Whitehead was a passive affair with plenty of limped pots as stacks got very shallow. Alsup would steal pots post-flop, but Whitehead would somehow keep finding ways to double. However, Whitehead couldn’t win every all-in, which eventually gave the win and the bracelet to Alsup as his friend and fellow $800 Deepstack bracelet winner Rob Wazwaz erupted in joy.