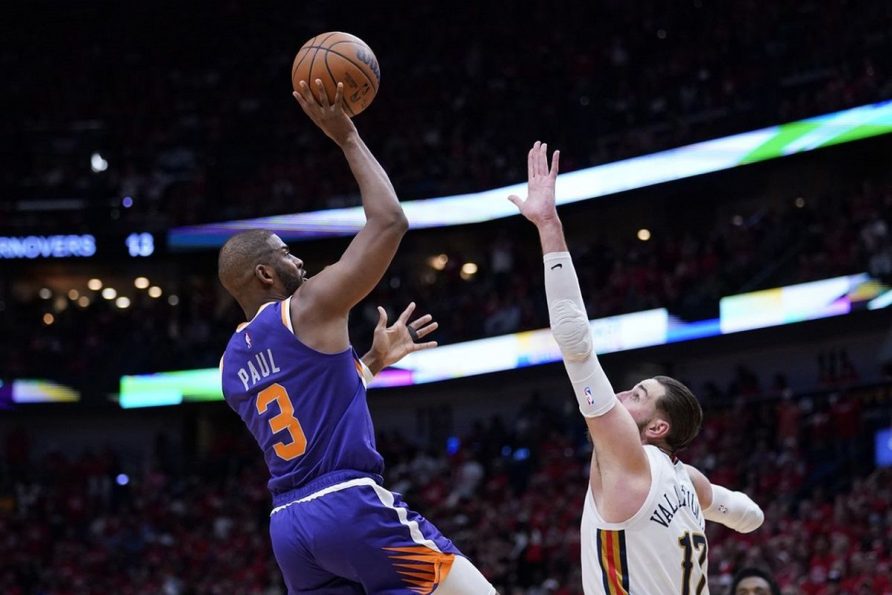 The top-seeded Phoenix Suns needed six games to finally knock out the #8 New Orleans Pelicans in the first round of the NBA Western Conference Playoffs. The Suns secured a second-straight trip to the conference semifinals thanks to a perfect shooting night from Chris Paul — who torched the Pelicans for 33 points with a flawless 14-for-14 from the floor. 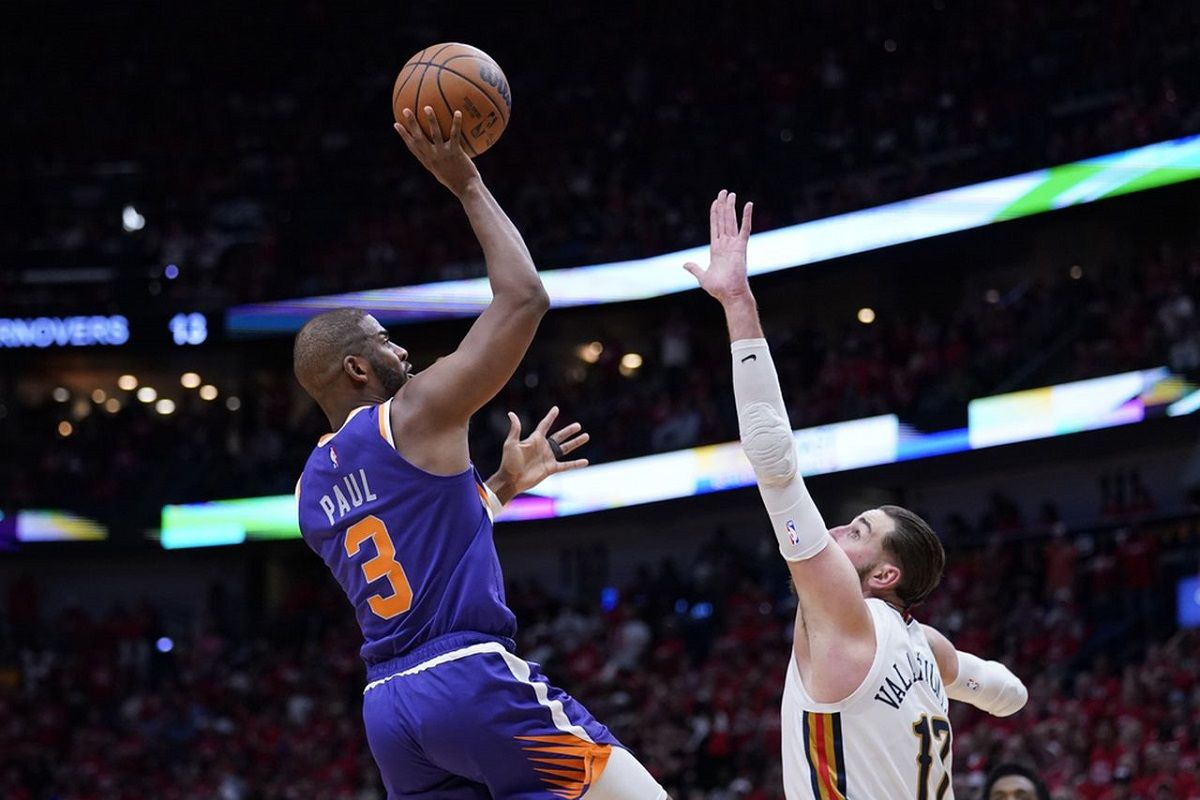 Chris Paul from the Phoenix Suns shoots a one-handed runner during his perfect evening, while Jonas Valanciunas of the New Orleans Pelicans fails to block his shot at the Smoothie King Center. (Image: Gerald Herbert/Getty)

The Suns defeated the Pelicans 115-109 in Game 6 to clinch the first-round series. The Pelicans blew a 10-point halftime lead when the Suns rallied early in the third quarter to seize control of the game.

The Suns will meet the #4 Dallas Mavericks in the next round starting on Monday evening in Phoenix. The Mavs also needed six games to defeat the #5 Utah Jazz in their opening-round matchup. In the Western Conference Semifinals, the Suns are the betting favorite at -300 odds to win the series, according to DraftKings’ series markets. The Mavs are +230 odds to upend the Suns in the west semis.

The Suns are the betting favorite at +290 odds to win the 2022 NBA championship over at DraftKings’ NBA futures board. You can back the Suns at +135 odds to win the Western Conference in back-to-back seasons.

Bright Future for the Pelicans

Zion Williamson, the former #1 pick in the NBA Draft, did not play a single game for the Pelicans this season due to a foot injury. He made several attempts to return to the hardwood, but suffered multiple setbacks during his rehab.

Without Zion, the Pelicans finished the regular season in ninth place. The Pelicans added some much-needed firepower when they acquired CJ McCollum in a trade with the Portland Trail Blazers at the trade deadline. McCollum played awesome down the stretch and helped the Pelicans qualify for the Western Conference Play-In Tournament after they won two big games against the Los Angeles Lakers in the final two weeks of the season.

The Pelicans won two games in the Play-In Tournament, and defeated the eighth-place LA Clippers in the finale to secure the #8 seed.

Oddsmakers did not give the Pelicans much of a chance against the best team in the NBA. The Suns opened as -2500 favorites to win the series, while the Pelicans were +1200 underdogs.

The Pelicans made things interesting with a huge victory in Game 2, which coincided with Devin Booker’s hamstring injury. The Pelicans won Game 4 in New Orleans to tie to series at 2-2, which gave fans in the Big Easy a glimmer of hope. Unfortunately, that was their last victory in the postseason after dropping Game 5 and Game 6.

McCollum struggled to find a good shot in the elimination game. He shot just 1-for-5 from downtown and finished with 16 points, after averaging 23.4 ppg in his first five games. The Suns kept big man Jonas Valaciunas in check with just 10 points and eight rebounds. Brandon Ingram led the Pelicans with a team-high 21 points in the loss.

Despite the first-round knockout, the Pelicans have something to build upon for next season, including the long-awaited return of Zion.

Without Booker in the lineup against the Pelicans, the Suns were 2-1. He was supposed to miss two to three weeks with the strained right hamstring, but he bounced back faster than everyone expected and returned to action after a nine-day layoff.

Booker scored 13 points in 32 minutes of action in Game 6.

“It was really nice to have D-Book back,” said Chris Paul.  “All that pressure they’ve been doing against us the whole series, especially the last three games, was tough.”

Paul scored a game-high 33 points on perfect shooting night. He shot 14-for-14 from the floor, including his only 3-point attempt. He also shot 4-for-4 from the free-throw line.

“I had no clue,” said Paul. “Throughout the game, I was literally managing the game. I wasn’t taking heat checks. I don’t shoot enough to have heat checks.”

Paul had a historic and perfect night for the Suns against his former team. He spent his first six seasons in the NBA with the New Orleans Hornets after they selected him with the fourth-overall pick in the 2005 NBA Draft.

“I know how special New Orleans is to him,” said head coach Monty Williams. “He cares deeply about the city, the people here, the fans, the children. So, for him to come back here and play that way, I know it was really cool for him.”