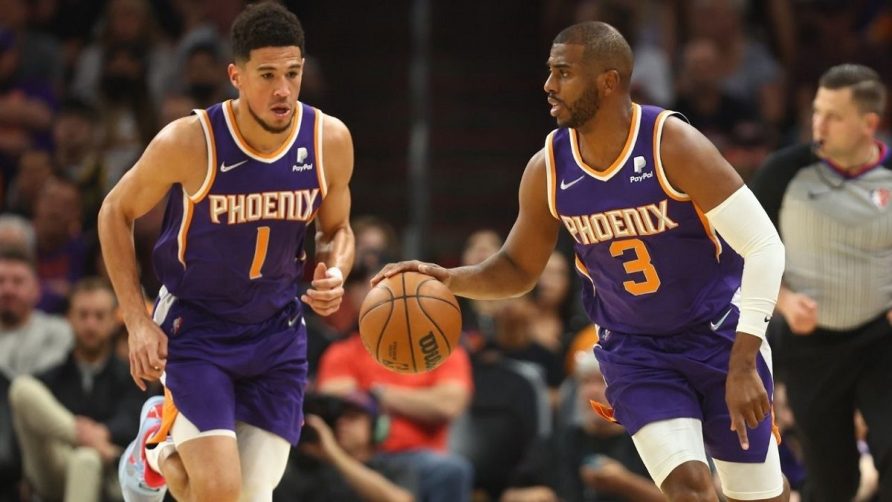 The NBA regular season is over and at the start of the postseason, the Phoenix Suns are the consensus betting favorite at +260 odds to win the 2022 NBA championship. The Suns, last season’s runner-up, finished the regular season with the best record in the league. 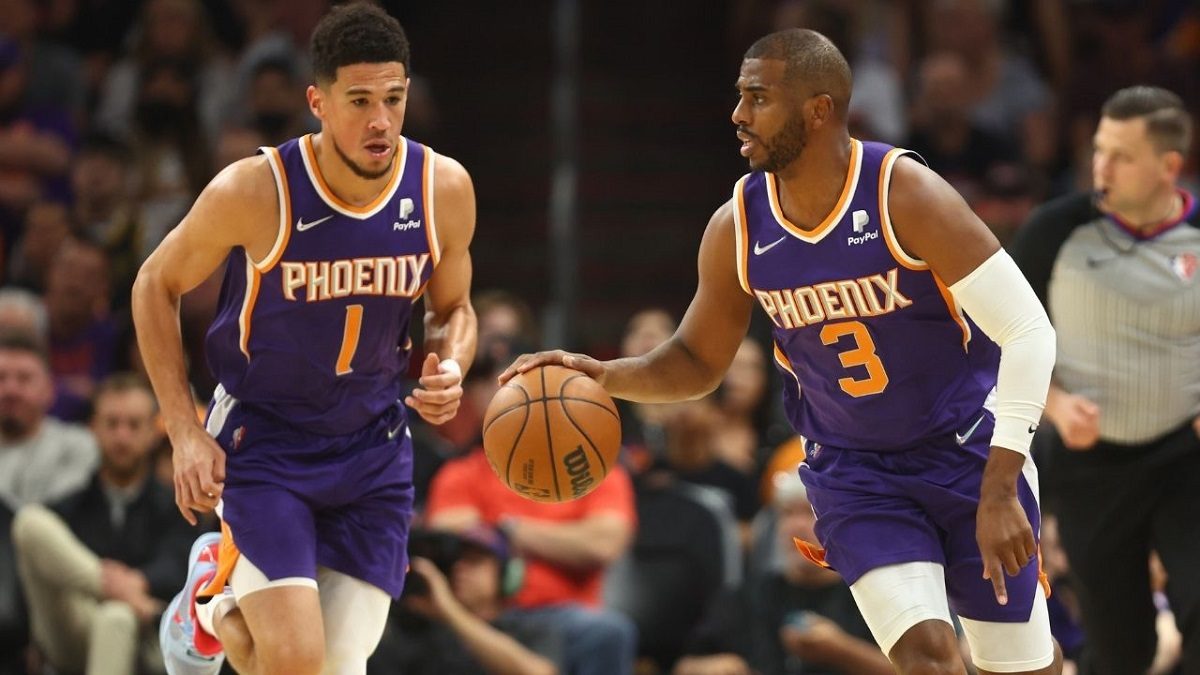 Chris Paul from the Phoenix Suns bring the ball up the court with Devin Booker trailing. (Image: Donald Becker/Getty)

The defending champion Milwaukee Bucks are the second betting favorite on the NBA futures board at +500 odds to win the championship in back-to-back seasons.

The Miami Heat secured the #1 seed in the Eastern Conference, but they’re the seventh-highest team on the board at +1000 odds.

The Suns took advantage of numerous injuries to their opponents in the 2021 NBA playoffs, and had a fairly easy path to the NBA Finals. The Bucks knocked out the Suns in six games to win their first title in 50 years. The Suns were on a mission this season to prove that the previous season was not a fluke. They’re also hellbent on winning the title this year, which Chris Paul has been chasing since he joined the NBA in 2005.

The bookies did not give the Suns much faith in the preseason with +1700 odds to win the championship. They’ve been the championship favorite since the All-Star Break, and you can back the Suns at +260 odds right now.

The Milwaukee Bucks opened the season at +900 odds to repeat. After a sluggish start due to the dreaded championship hangover, the Bucks have been steadily improving throughout the season. The Greek Freak wants to prove to everyone that he’s not a one-and-done winner. The public has faith in the #3-seeded Bucks as the second favorite on the board, and they begin the playoffs at +500 odds to win another championship.

Brooklyn Nets were the consensus betting preseason favorite to win the NBA championship at +200 odds. A lot has changed since October. They ditched James Harden in a trade with the Philadelphia 76ers for Ben Simmons. Simmons has yet to play a game with the Nets, but they’re hopeful he can be ready sometime in the next couple of weeks. Despite the fact the Nets finished in seventh place and headed to the play-in tournament, they’re still the third-best favorite on the board at +600 odds.

Steph Curry and the Golden State Warriors opened as +1100 odds, but that’s because Klay Thompson had yet to return after missing two seasons with numerous injuries. Without Thompson, the Warriors jumped out of the gate with a torrid start to become one of the early-season favorites to win the title. However, Curry went into a shooting slump just as Thompson returned and they chase pack caught up to them. Curry suffered a foot injury and missed the last month of the season, but he’s expected to return for the first round. You can back the Warriors at +850 odds to win their first championship since 2018.

The Boston Celtics ended the regular season as one of the hottest team in the NBA and secured the #2 seed in the Eastern Conference. The Celtics were 18-21 in the first week of January and there were rumors that they could break up the team prior to the trade deadline. But the Celtics finally got their defense figured out and embarked on a heater the rest of the season with a 33-10 clip. Losing Robert Williams (knee) for the postseason is tough, but the Celtics are still +900 odds.

Joel Embiid narrowly missed winning the MVP, but he finished as the NBA’s leading scorer with 30.6 ppg. The Philadelphia 76ers ditched an unhappy Ben Simmons and added James Harden to provide a second-scoring punch behind Embiid. The 76ers locked up the #4 seed, but you can back them at +1400 odds to win the championship.

The Miami Heat and Jimmy Butler would love to return to the NBA Finals for a second time in the last three seasons. The Heat started the season at +2500 odds to win the title, but they’re only +1000 despite snagging the #1 seed as the top team in the Eastern Conference.

The Memphis Grizzlies (56-26) were the surprise team in the NBA this season with the second-best record behind the Suns. Ja Morant played like an MVP leading the highs-scoring Grizzlies. Despite their success in the regular season, the Grizzlies are inexperienced in the postseason, which is why they’re +1300 odds to win the NBA championship.