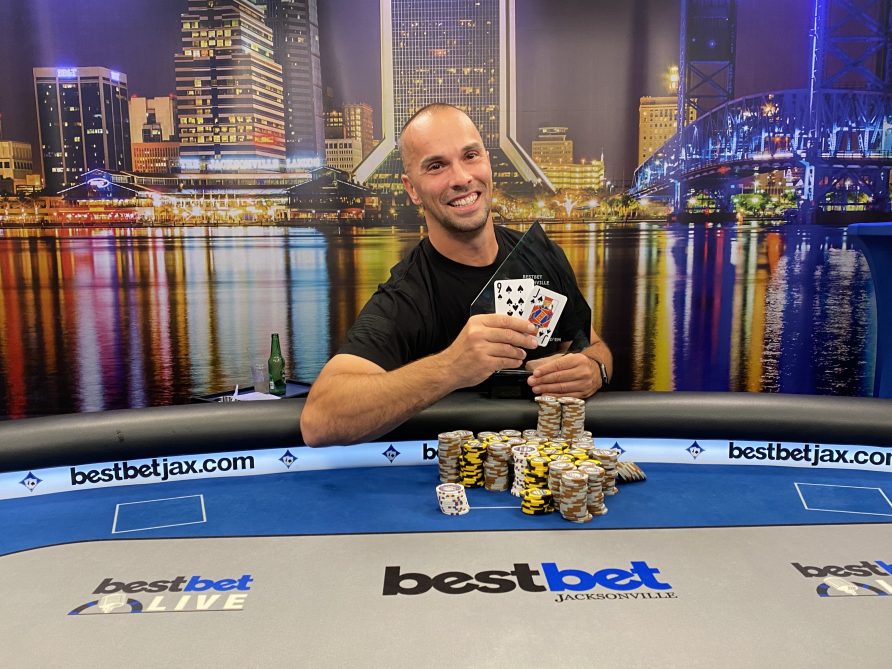 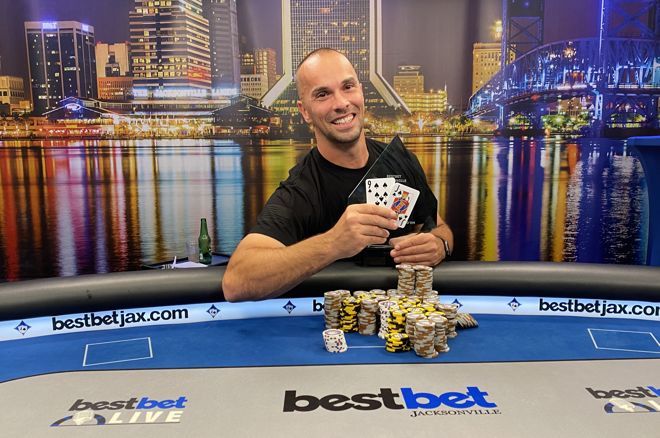 Nick Raio of St. John’s, Florida was the winner of the $1,680 NLH Mystery Bounty Main Event at the 2022 bestbet Jacksonville Spring Series after a five-handed deal at the final table that earned him the bestbet trophy and $60,000 in prize money. Those who got in on the chop included Tyler Phillips, Gil Levy, Justin Swilling and Jason Cummings, each of whom earned $41,813 for their efforts.

The exciting bounty tournament, which had an elusive $50,000 bounty up for grabs, attracted 405 runners across three starting flights to generate $405,000 in prize money in addition to the bounty prize pool.

Raio, who had $175,018 in live earnings heading into the tournament and a previous best score of $13,367 according to The Hendon Mob, told PokerNews he was “feeling good” after getting his best-ever live cash.

“I’ve been playing a lot at bestbet,” he said after the victory. “I have never (won an event here), I finally closed one out … It just feels good to finally just ship it and dominate the whole field.”

Only 50 players returned for Day 2 and all of them were excited for a chance to bust an opponent for a shot at winning a big bounty.

First up was Edward Mroczkowski, who bagged two starting flights and therefore earned a free bounty pull. Mroczkowski pulled a $5,000 bounty prize, while Greg Robinson, who had also bagged twice, was next up and pulled a $2,000 bounty.

It didn’t take long for the second-largest bounty of $25,000 to find an owner when it was picked up by Cummings, who was one of the big winners of the day as he later pulled a $10,000 bounty.

A few hours into the day, Dickie Malone peeled the $50,000 envelope to win the largest bounty prize. It was the 22nd bounty pull of the day, and Malone had a good feeling as that happens to be his lucky number.

Over at @bestbet_jax, Dickie Malone gets to pull the 22nd bounty of the day. Just before this draw, he told PokerNe… https://t.co/nbi6enlEt6

“When he showed me that number … it’s my racing number, baseball number, basketball number … I said ‘this has got to be it,'” he said afterward.

Day 1a chip leader Timothy Pollard was eliminated on the final table bubble when he moved in with bottom pair and got called by the overpair of Phillips. While he didn’t get to play on the live-streamed final table, Phillips did earn $8,124 for his deep tournament run. 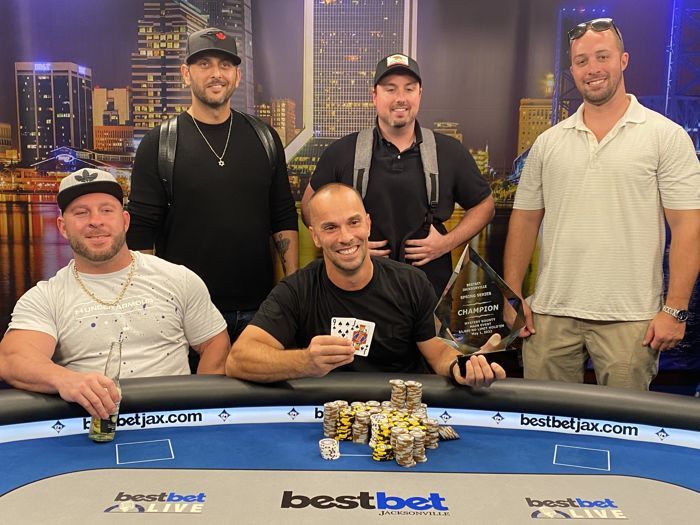 Charles Lonaise was the first player to go out at the final table when he got it in with top pair against the flush and straight draws of Raio, who binked a straight on the river after putting his opponent all in on the turn.

In a surprising turn of events, Russell Quick, who entered the final table as chip leader and had accumulated nearly a dozen bounties over the course of the day, was out next after getting short-stacked and moving in with ace-seven. Quick ran into the pocket tens of Levy, who he had double up a few hands earlier, and couldn’t get there to keep his tournament run going.

Justin Lee went out in sixth place for $17,031 in brutal fashion in a flush-over-flush hand against Raio, who extended his chip lead and soon after reached a deal with his four remaining competitors.

“I just played super aggressive,” Raio said when asked how he accumulated chips throughout the day. “I played my draws very aggressive. Put some people in some tough spots to choose for their tournament life and it worked out for me.”