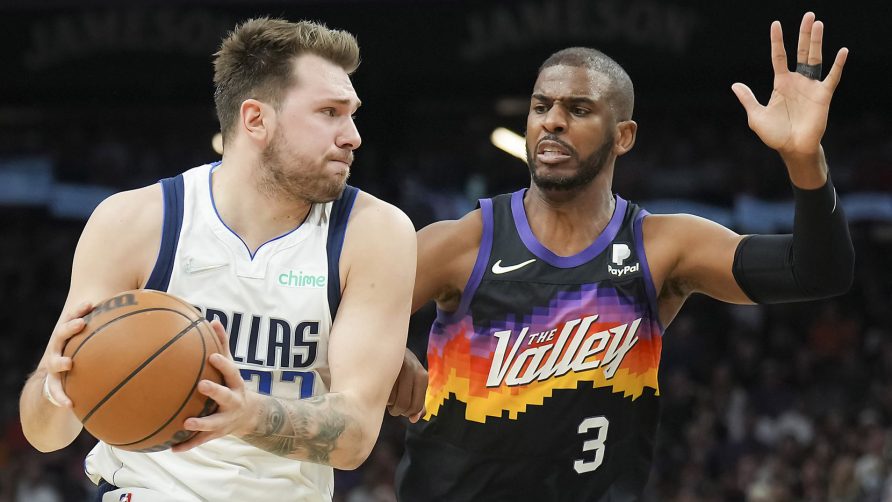 Eight teams remain in the hunt for the 2022 NBA championship with Game 3 of the conference semifinals slated for Friday and Saturday. The Philadelphia 76ers and Dallas Mavericks find themselves down 0-2, but get to host Game 3 on their home court on Friday for a chance to trim their deficit against the top-ranked Miami Heat and the Phoenix Suns. On Saturday, both games are tied at 1-1 and Game 3 provides teams a chance to pull ahead 2-1 when the Milwaukee Bucks host the Boston Celtics, and the Golden State Warriors battle the Memphis Grizzlies. 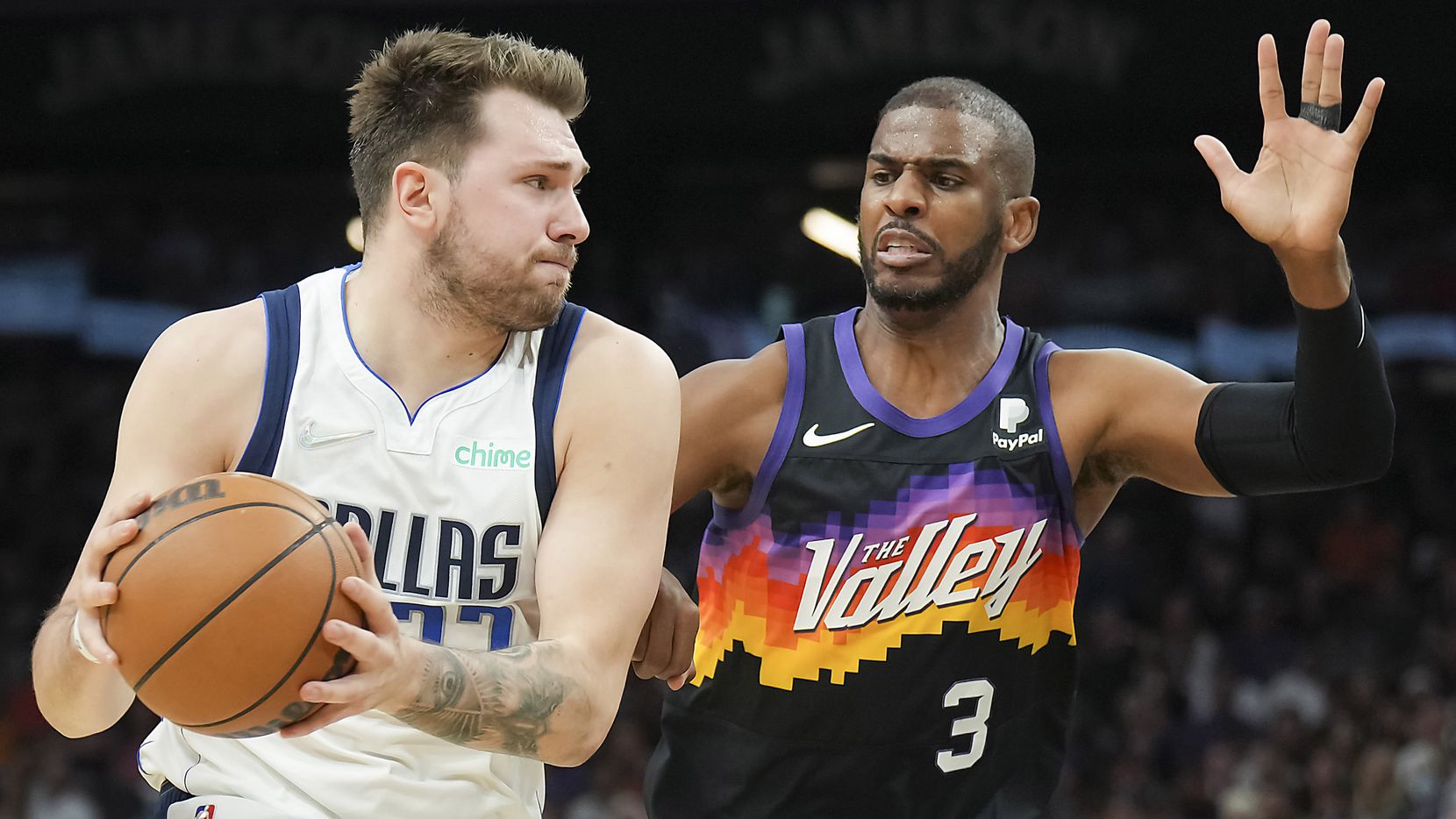 Chris Paul from the Phoenix Suns defends Luka Doncic of the Dallas Mavs in Game 2 of the Western Conference Semifinals. (Image: Getty)

The quickie preview returns to give you a better sense of what’s at stake for the final eight teams this weekend. There’s a good chance that the Miami Heat and Phoenix Suns can lock up their series with a 4-0 sweep with victories on Friday and Sunday.

The Suns are the consensus betting favorite to win the 2022 NBA championship at +185 odds, according to a recent update by DraftKings. The Warriors are the second-highest team on the NBA futures board at +340 odds, while the Celtics and Heat are both +475 odds to win the title. Meanwhile, the defending champion Bucks are +750 odds to win back-to-back championships.

Game 3: Miami Heat (2-0) at Philadelphia 76ers (0-2)… Joel Embiid is listed as out for the 76ers, but he cleared concussion protocol, so he could be a game-time decision. The betting line opened with the 76ers as a -1 favorite, but then jumped to a +3 home dog yesterday when Embiid was listed as out. When Embiid cleared the concussion protocol, the line moved to +1 with Philly bettors firing away on the 76ers because they think Embiid will play. Keep a close eye on his status. Without Embiid, the Heat should continue to dominated. With Embiid, the 76ers have a shot at avoiding an 0-3 hole. With Embiid getting all the attention, Kyle Lowry from the Heat missed the first two games of the series with a hamstring injury, yet the Heat still secured two double-digit victories. The Heat upgraded Lowry to questionable for Game 3.

Game 3: Phoenix Suns (2-0) at Dallas Mavs (0-2)… The Suns exploited the Mavs’ biggest flaws to take a 2-0 lead. Luka Doncic (40 ppg, 8.5 rebounds, 7.5 assists) has been a one-man wrecking crew with a sensational first two games including 43.5% from beyond the arc. However, the rest of the Mavs disappeared against the Suns, especially Jalen Brunson (11 ppg, 16.7% 3-point FG). Doncic outscored the rest of the starters in the first two games — 35-31 in Game 1, 45-39 in Game 2 — which cannot continue to happen otherwise the Mavs will get swept. On defense, the Suns are pick-and-rolling Doncic to death and he’s gassed by the time the fourth quarter rolls around. The Mavs have a chance to win a game at home and cut their deficit in half. The Mavs/Suns are a pick’em in Game 3.

Game 3: Boston Celtics (1-1) at Milwaukee Bucks (1-1)… Greek Freak dropped a triple-double in Game 1 and the Bucks ambushed the Celtics on their own court. Even without Marcus Smart in Game 2, a better-prepared Celtics shot lights out in Game 2 with a 46.5% success rate from 3-point range. They knocked down more treys (20) than the Bucks attempted (3-for-18). The Celtics outscored the Bucks 60-9 from beyond the arc in Game 2 which led to a  23-point blowout. The Bucks need to shoot better from downtown and play much better defense on the perimeter if they expect to regain control of this season. At least the Bucks have a home-court advantage in Game 3, which is why they’re -2 favorites. The Celtics upgraded Smart to probable for Game 3 on Saturday.

Game 3: Memphis Grizzlies (1-1) at Golden State Warriors (1-1)… This is the closest series out of the remaining four. The Warriors won Game 1 by just one points, and the Grizzlies won Game 2 by only five thanks to a career-tying 47 points from Ja Morant. Dillon Brooks will not play for the Grizzlies in Game 3 while he serves a one-game suspension for a flagrant foul against Gary Payton II (fractured elbow) of the Warriors in the opening minutes of Game 2. This series has been super chippy and very physical, so expect the zebras to call a tight game for Game 3. The Warriors are -7 favorites at home in San Francisco for Game 3.

Sunday: Bust Out the Brooms for Game 4?

Game 4: Miami Heat (2-0) at Philadelphia 76ers (0-2)… If Embiid does not play in Game 3, there’s a good chance he suit up for Game 4 especially if they’re down 0-3. If Lowry (hamstring) sits out Game 3 for the Heat and they lose, he should return to action for Game 4. Obviously, if the Heat can close out the series without Lowry and give him extra rest, they’ll take advantage of that opportunity.

Game 4: Phoenix Suns (2-0) at Dallas Mavs (0-2)… If the Suns win Game 3, they’ll have a chance to pull off a sweep in Game 4. If the Mavs win Game 3, they’ll have a chance to even the series at 2-2. The Mavs need an offensive boost from Jalen Brunson and Spencer Dinwiddie if they want to stay alive. On the flip side, the Suns keep cruising. Devin Booker (26.5 ppg) showed no signs of being hampered by a hamstring injury when he missed three games in the opening round. He’s shooting 41.3% from 3-point land this series. Chris Paul dominated Doncic in the fourth quarter of Game 2 and finished with 28 points, eight assists, and six rebounds. CP3 is shooting 45% from 3-point range this series.