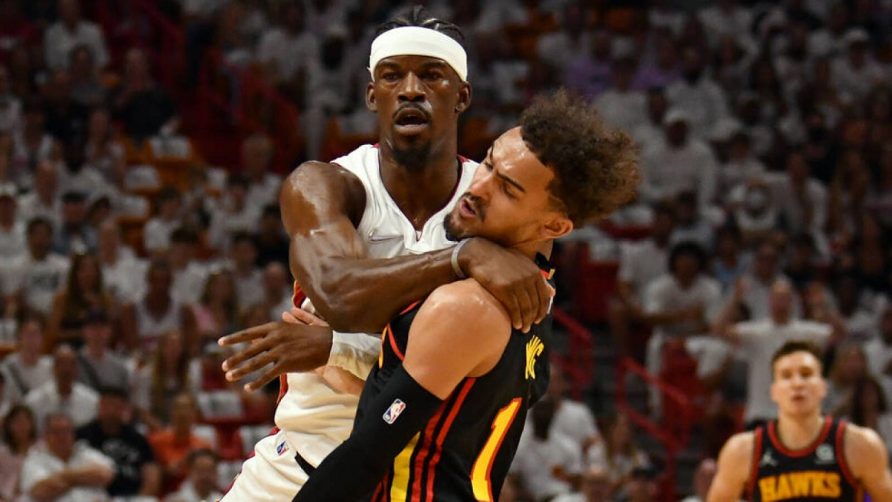 If you’re a numerologist, then betting NBA divisional futures could be up your alley. Miami Heat are -180 odds to win the Southeast Division in back-to-back years, but the Atlanta Hawks at +165 odds are trying to win their second divisional title in three seasons. 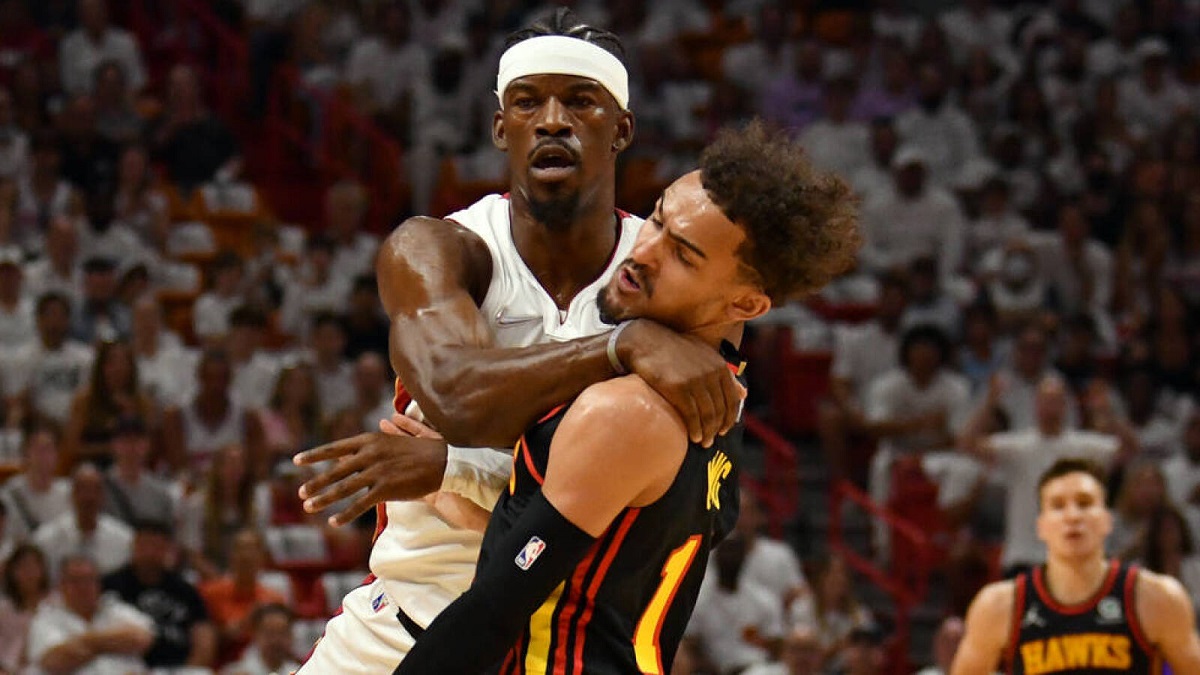 Jimmy Butler from the Miami Heat and Trae Young of the Atlanta Hawks collide during a pick-and-roll last season. (Image: Getty)

The Heat tend to win the Southeast Division in even-numbered years, but slack off in the odd-numbered years which bodes well for the Hawks. Over the previous ten years, the Heat were division champs in 2022, 2020, 2018, 2016, 2014, and 2012. Between 2011 and 2014, the Heat won four-straight Southeast Division titles but 2013 was the last time they won it in an odd year. Since then, the Heat win the division every other year.

The Charlotte Hornets are +850 odds to win the division for the first time since the inception of the Southeast, but it’s looking like a two-way race between the Heat and the Hawks. The bookies do not have any faith in the Washington Wizards at +3000 odds, and the Orlando Magic were installed with astronomical odds at +30000 to win the Southeast.

The Miami Heat could shake up their roster with a blockbuster trade. Kevin Durant, Kyrie Irving, and Donovan Mitchell have all been mentioned in trade rumors involving the Heat, but which one will Pat Riley land?

If the Heat acquire Durant, how much of their team will they have intact to make a run? If Riley and the Heat gamble on Durant, they think that even Butler, Bam Adebayo, and Durant plus a bunch of no names could still be a championship contender.

Although the Utah Jazz do not want too many veterans, they prefer six first-round draft picks for Mitchell which the Heat are lacking. The Irving trade market is thin and the Heat could get an upgrade at point guard at a much lower cost than a Durant or Mitchell trade, but is Riley tends to avoid players that could derail the winning culture that head coach Erik Spoelstra cultivated over the last dozen years.

The Heat could stand pat and try to run it back with the same squad. They were the #1 seed in the Eastern Conference last season, and fell shy of one missed 3-pointer away from a trip to the 2022 NBA Finals. Unfortunate injuries to Kyle Lowry, Jimmy Butler, and Sixth Man of the Year Tyler Herro prevented the Heat from a second trip to the NBA Finals inside of three seasons.

Even without Durant, the Heat are still the best team in the Southeast and you should back them at -180 odds to win the division. It’s also a bargain at -180 if they ended up with Durant or Irving, because the price will definitely spike after any acquisition.

The Atlanta Hawks surprised everyone two seasons ago when they got hot in the playoffs and secured a spot in the Eastern Conference Finals. Trae Young is a legit superstar who loves playing the role of the villain, which is reminiscent of Reggie Miller from the Indiana Pacers in the 1990s.

John Collins is one of the few players on the roster who did not jive with how Young runs the offense, and he requested a trade. The Portland Trail Blazers are interested in surrounding Damian Lillard with a player like Collins, but trade talks have simmered down.

The Hawks acquired Dejounte Murray in a trade with the San Antonio Spurs in an effort to upgrade their defense. Young is an offensive superstar but opposing teams hunt him on defense. Murray is an All-Star and defensive stopped. The Hawks added one of the top two-way players in the league to provide them with a much stronger defensive presence on the perimeter.

The Hawks will have one of the premier backcourts in the Eastern Conference, but we’ll see if it can translate into a division crown or a high playoff seed. You can back the Hawks at +165 odds to win the Southeast Division, but it’s a bit of a risk because of the unknown status of the Heat and their pursuit of Durant.

The Charlotte Hornets advanced to the Eastern Conference Play-In Tournament the last two seasons, but bubbled the final playoff spot both times. The high-flying Hornets has one of the most exciting offenses in the NBA last season led by LaMelo Ball, but they couldn’t play defense to save their lives. Michael Jordan re-hired Steve Clifford in hopes the former Hornets head coach can teach the young Hornets how to play better defense.

The Hornets have some off the court drama to deal with and might start the season without Miles Bridges due to a domestic abuse assault charge. Forward Gordon Hayward also hinted he wanted out of Buzz City, so there’s a chance they might trade him before the season begins. The Hornets could use an upgrade at center, especially a defensive-minded rim protector.

The Hornets are not a legit threat to win the Southeast Division this season, but their +850 odds seems very generous and should be +1000 or higher.

The Washington Wizards were able to persuade Bradley Beal to stay with the team, but they foolishly traded away Kentavious Caldwell-Pope to the Denver Nuggets for Willie Barton and Monte Morris. KCP had championship experience and was both a 3-point threat and lockdown defender, but the Wizards are going all-in on rookie Johnny Davis. Davis might end up the steal of the 2022 NBA draft as the #10 pick, but at least he has a great mentor in Beal.

Kyle Kuzma (17.1 ppg 8.5 rebounds) is the only other reliable and healthy scorer besides Beal on the roster. Kristaps Porzingis averaged 20.2 points and 8.1 rebounds in 17 games with the Wizards last season after the Dallas Mavs exiled the Unicorn to DC. However, the Unicorn is huge health risk and missed 31 total games last season.

The Orlando Magic are loaded with young, but inexperienced players, but can they develop them into a team that’s a perennial playoff contender? Instead of selecting Jabari Smith, Jr. — the overall consensus #1 pick in the draft — the Magic threw everyone a curveball and picked Paolo Banchero from Duke with the first pick. Banchero joins a strong group of up and coming future stars including Franz Wagner, Cole Anthony, Jalen Suggs, RJ Hampton, and Wendell Carter, Jr.

Markelle Fultz has been plagued with injuries since the Philadelphia 76ers selected him with the #1 pick in the 2017 NBA Draft, but he has a chance to thrive with the Magic as their Sixth Man.

The Magic might be fun to watch, but do not expect them to win many games. They might try to tank again. Sound familiar? At least there’s a good excuse to suck this upcoming season. The bottom feeders in the league — especially the Magic — are excited at the possibility of hitting next year’s draft lottery for a shot at Victor Wembanyana. The French teenager is regarded as the best big man prospect in a decade even more.