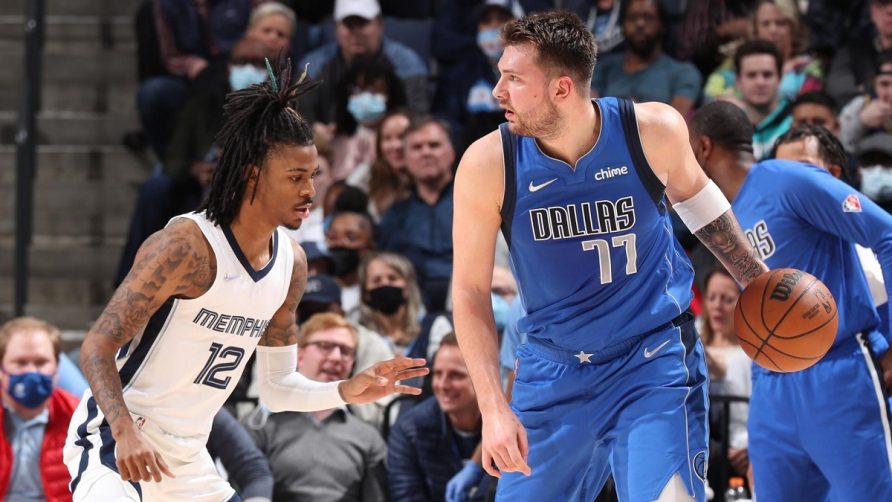 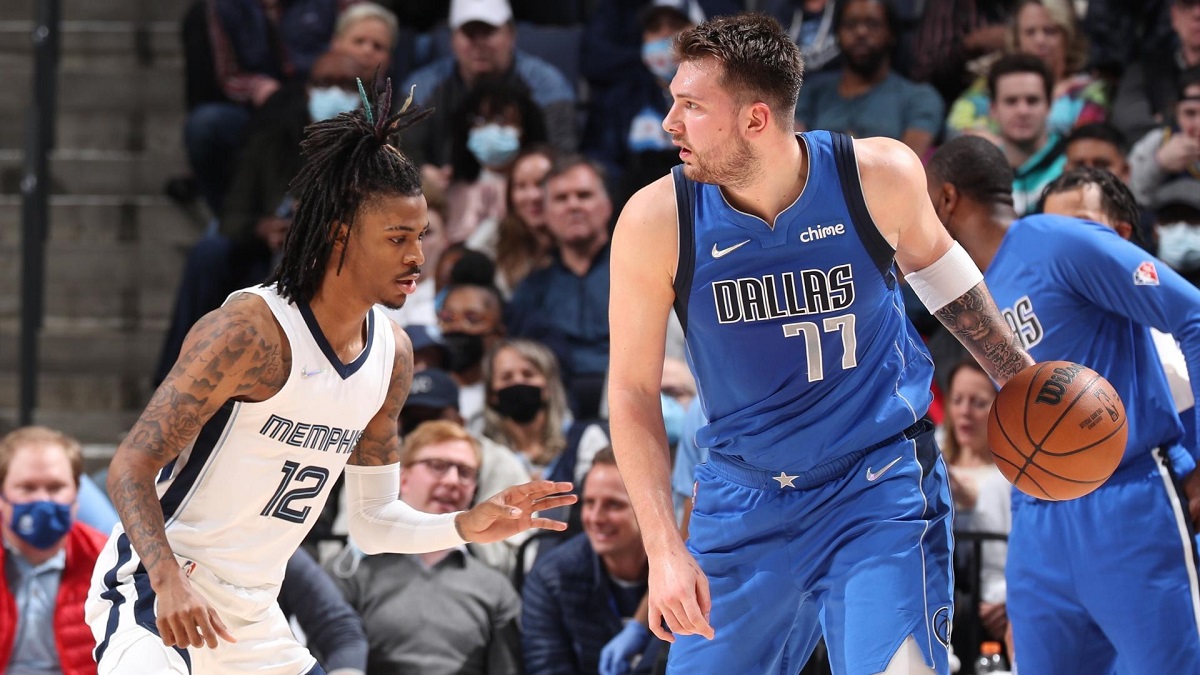 Ja Morant from the Memphis Grizzlies defends Luka Doncic of the Dallas Mavericks in a battle between the top two teams in the Southwest Division. (Image: Getty)

The Grizzlies surprised everyone last season when they finished the regular season with the NBA’s second-best record at 56-26, and secured the #2 seed in the Western Conference playoffs. If Morant hadn’t suffered a knee injury, who knows if they could have knocked out the Golden State Warriors in seven games to secure a spot in the NBA Finals instead.

If you followed our NBA coverage last season, then you’re aware of our affinity for Morant. We tapped Morant as our midseason MVP and end-of-season MVP, and it was awesome to see the rest of the world catch a glimpse of the “mighty power of Ja!” in the playoffs.

Now comes the real test because no one will overlook the Grizzlies this upcoming season. The bookies set the Grizzlies’ win total at 49.5 o/u, which seems a little low, even with a target on their backs. The young team is all one year older and was able to gain much-needed postseason experience. Can they win the championship? Let’s not get too ahead of ourselves and, instead, just focus on whether they can win division first and foremost.

You can back the Grizzlies at even money to win the Southwest Division at +100 odds, but based on the shaky status of the Mavs, it seems like a logical wager.

There’s no denying that Doncic is one of the NBA’s best players, and he’s only 23 years old. However, every great superstar reaches a point of reckoning when they have to put their ego aside and accept the fact that basketball is a team sport with four other teammates on the court with you. Doncic might be able to win regular season games by himself, but the Mavs found out the hard way it’s difficult for Doncic to carry the burden in the postseason.

The Mavs traded Kristaps Porzingis before the trade deadline and, even without “The Unicorn,” the Mavs still advanced to the Western Conference finals. It was a wise move because the Mavs couldn’t rely on the injury-prone Porzingis. However, there were moments in the playoffs when the Mavs really could have used a secondary scoring option like The Unicorn.

Point guard Jalen Brunson signed with the New York Knicks in free agency, which is a red flag that the Mavs’ second-best player decided to leave the team in favor of joining the #LOLKnicks. Brunson wanted to play on a more-balanced offensive attack and not stand around and watch Doncic hog the ball.

Without additional scorers to help Doncic, the Mavs seem overpriced at +120 odds to win the Southwest Division, compared to the Grizzlies at even money.

The Pelicans secured a spot in the Western Conference Play-In Tournament, locking up the #8 seed thanks to a late-season surge led by CJ McCollum. The Portland Trail Blazers traded McCollum to the Pelicans who were thrilled to add a veteran playmaker to their young roster.

Zion Williamson has been plagued with injuries since he arrived in New Orleans as the #1 pick in the 2019 NBA Draft. Once again, Williamson’s health will be the X-factor for the Pelicans. If he stays off the injury list, then the Pelicans could challenge the Grizzlies for the division crown and win their first Southwest title since they were rebranded as the Pelicans in 2013.

The Pelicans are +400 odds to win the Southwest, but you’re really betting on Williamson staying healthy for the season.

The San Antonio Spurs traded their best player — Dejounte Murray — to the Atlanta Hawks, and the word on the street is that the Spurs will tank this season for a shot at winning the Victor Wembanyama sweepstakes. The 7-foot-3 center from France with a deadly outside shot is the best big man prospect in over two decades.

Wembanyama has been getting raves from international NBA scouts who compared him to Spurs legend Tim Duncan. The Spurs and a handful of other teams will compete for one of the worst records in the league, then hope to get lucky with the #1 pick in the 2023 NBA Draft Lottery. The Spurs are a moon shot to win the Southwest Division at +50000 odds.

Just a decade ago, the Rockets and the Spurs were the premier teams in the Southwest. Between 2011 and 2020, the Spurs or the Rockets were the only teams to win the division title. In the last two seasons, the balance of power has drastically shifted, and the Spurs and Rockets are slugging it out in a basement bum fight.

The Rockets held the worst record in the NBA in each of the last two seasons at 17-55 and 20-62. At least the Rockets have incentive to suck this season with a chance to turn around the franchise with Wembanyama via the draft lottery. In the meantime, the Rockets have a couple of exciting players to keep tabs on, including Jalen Green and incoming rookie Jabari Smith, Jr., who was projected to go #1 before slipping to #3 where the Rockets were thrilled to snatch him up.