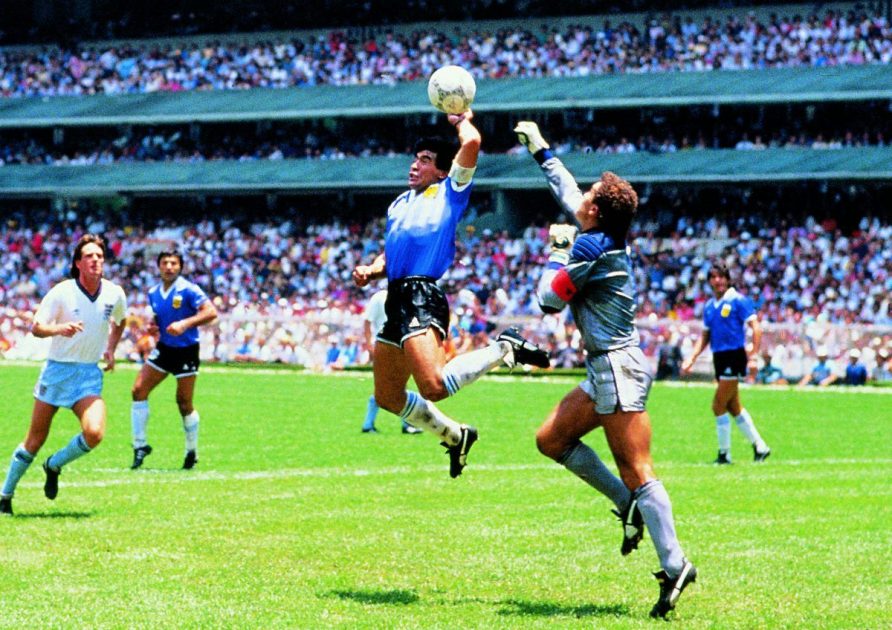 Diego Maradona’s match-worn “Hand of God” shirt from the game against England at the 1986 World Cup was sold for $8.93 million on Wednesday, making it the most expensive piece of sports memorabilia on record. 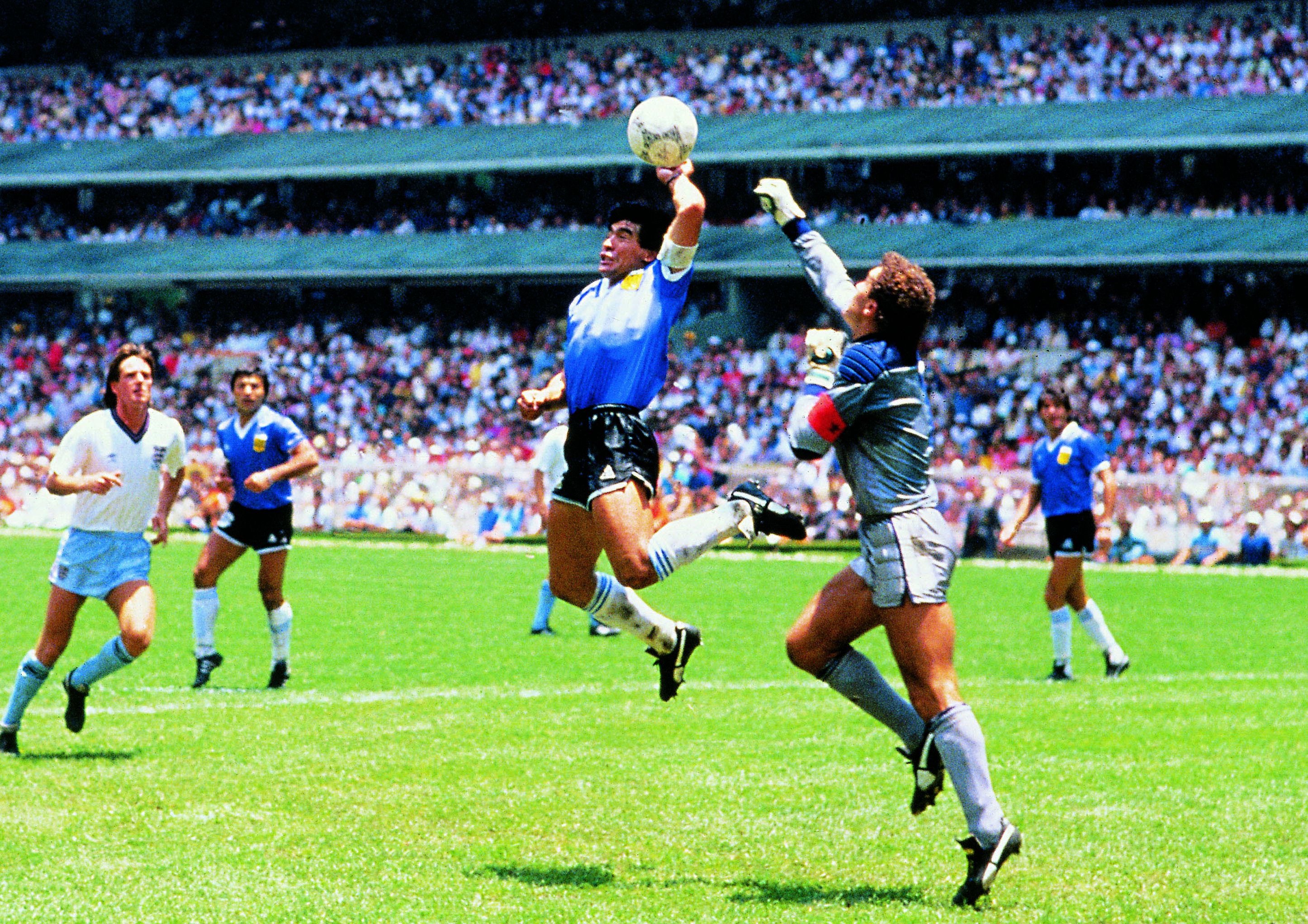 Maradona’s famous “Hand of God” shirt was sold for nearly $9 million at an auction on Wednesday. (Image: thenationalnews.com)

Maradona scored two of the most iconic goals in the history of football while wearing it, one of them being the “Hand of God” which helped Argentina beat England in the quarter-finals of the tournament in Mexico. Maradona scored by punching the ball into the net early in the second half but the referees allowed the goal as none spotted the handball offense.

Asked about the incident, Maradona said it was the “Hand of God” to put the ball past the goal line. Just four minutes after the controversial goal, Maradona scored thanks to a brilliant solo effort. Diego picked the ball into his own half and dribbled his way past all the opponents, before beating England keeper Peter Shilton for what is regarded as the greatest World Cup goal ever.

The price paid at the auction for the shirt is a new record for an item of sports memorabilia. He was previously owned by former England midfielder Steve Hodge. He decided to auction it after allowing the England National Football Museum to have it on display over the past 19 years. 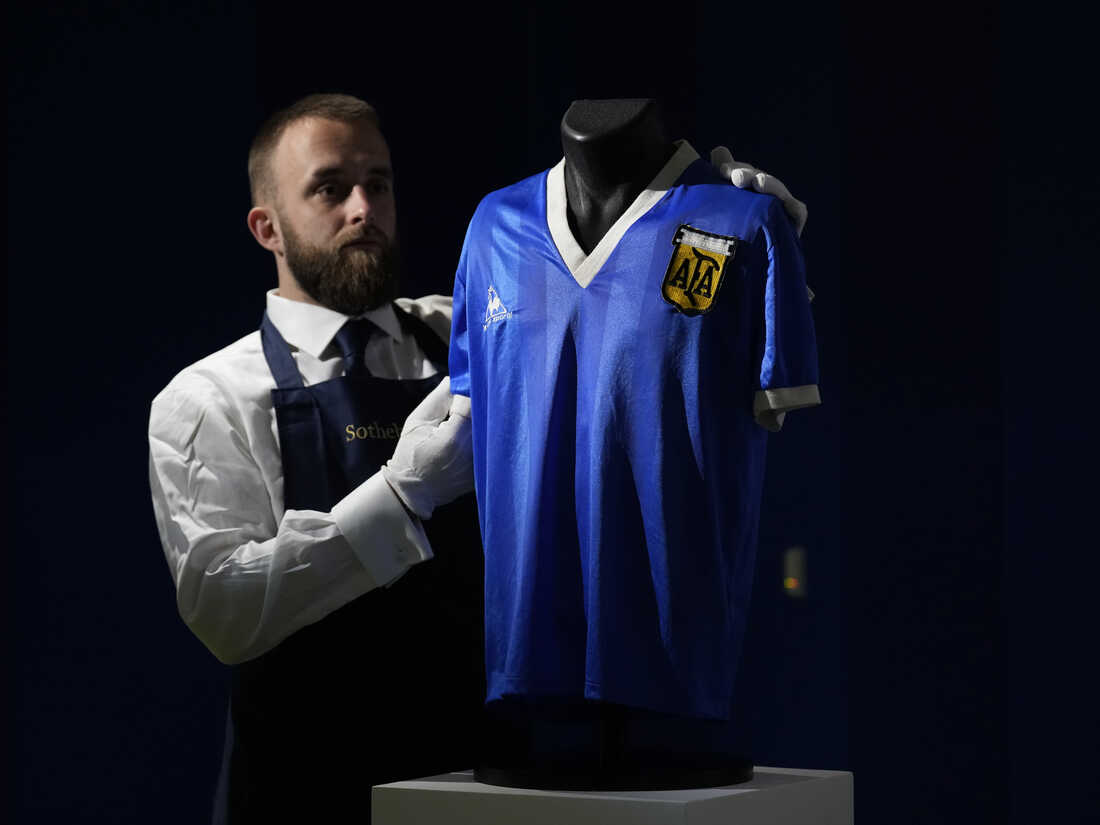 Maradona’s ‘Hand of God’ shirt has previously been displayed in the National Football Museum. (Image: npr.org)

A shirt with an unmatched story

“This historic shirt is a tangible reminder of an important moment not only in the history of sports but in the history of the 20th century,” said Brahm Wachter, Sotheby’s Head of Streetwear and Modern Collectables.

The buyer of the shirt wanted to stay anonymous. The sale broke the previous record of $8.8 million set in 2019 by the original autograph manuscript of the Olympic Manifesto from 1892.

The sale of Maradona’s famous shirt was complicated by claims that the wrong kit was being sold. Maradona’s daughter and ex-wife said Hodge received the shirt Maradona wore in the first half of the match. But Sotheby’s used photo-matching technology to examine the two shirts and concluded Maradona wore the auctioned kit as he netted his famous goals.

“The numbers were a joke. When we went out onto the field, some of the guys had sparkles on their faces because the numbers were silver and sparkling,” Maradona wrote.

“If it had happened to rain as it had in our match against Uruguay, it was going to be a real disaster: we wouldn’t know who was who or what position the others were playing,” he explained.

In the early 2000s, Hodge took the shirt onto the TV show Soccer AM. He carried it in a plastic bag and let members of the crew try it on. Back then, Hodge said he would “never let go” of Maradona’s top, despite being offered around more than $30k to do it at the time.

In 2020, after Maradona’s death, Hodge told the BBC: “I have had it for 34 years and have never once tried to sell it. I like having it. It has incredible sentimental value.”

“I have seen articles on the internet and there has been a bit of flak flying around saying I wanted a million or two million and hawking it around for money. I find it disrespectful and totally wrong. It’s not for sale. I am not trying to sell it,” he stressed.