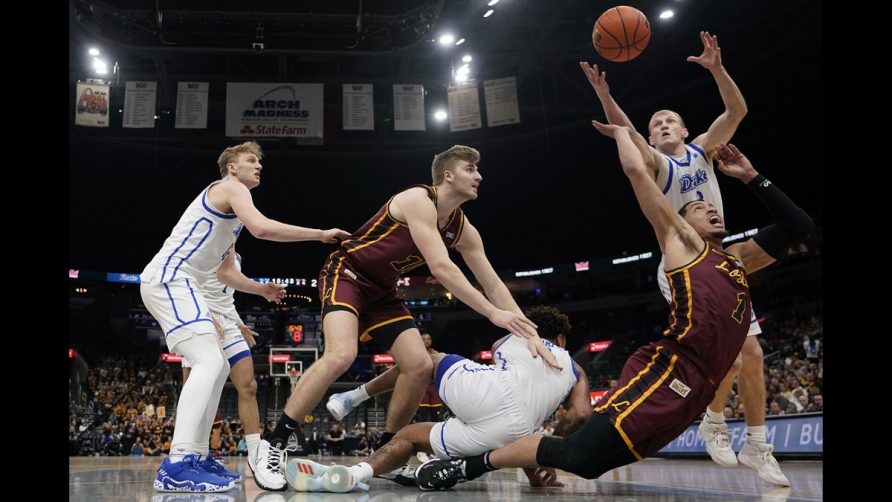 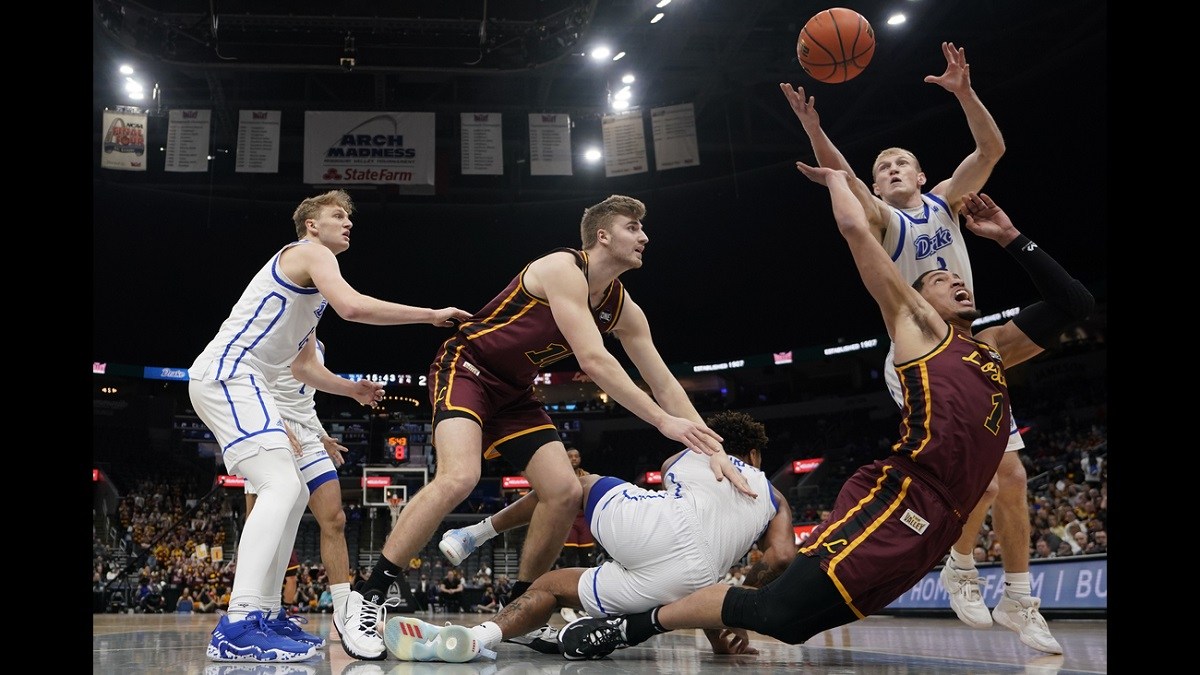 Garrett Sturtz (3) from Drake attempts to grab a loose ball from Lucas Williamson (1)  from the Loyola Chicago Ramblers in the Missouri Valley Conference finals of their conference tournament. (Image: Jeff Roberson/AP)

Loyola Chicago busted numerous brackets during their magical run as the Cinderella during the 2018 March Madness college basketball tournament when the Ramblers secured a spot in the 2018 Final Four as an #11 seed.

Last season with the #8 seed, Loyola Chicago won their first two games in the 2021 March Madness tournament. They were upended by #12 Oregon State in the Sweet 16.

This season marks the first time in nearly 60 years in which Loyola Chicago earned consecutive bids to March Madness. The last time they achieved that was back in 1962 and 1963. During the 1963 season, they ran the table in the tournament and won the NCAA men’s college basketball championship.

At 102-years young, Sister Jean will be able to sweat her team as Loyola Chicago’s good luck charm in March Madness one more time.

This season marked the final year that the Ramblers play in the MVC. Next season, they will join the Atlantic 10 Conference.

The Loyola Chicago Ramblers went 13-5 in the MVC regular season. Two of their losses were at the hands of Drank with a nine-point and seven-point defeats.

In the MVC conference tournament,the Ramblers won three games in three days to lock up a trip to March Madness. They defeated Bradley in the opening round with an easy 16-point victory and were led by Lucas Williamson’s16 points. In the semifinals, the Ramblers blew out Northern Iowa 66-43 thanks to 19 points from Braden Norris. The 23-point victory felt great for the Rambles considering they lost a 102-96 shootout in overtime in the final game of the regular season.

Drake needed an overtime session to sneak past Missouri State 79-78 in the semifinals.

Drake jumped out of the gate with an early 18-8 lead when Loyola Chicago’s shooters went cold. the Ramblers went on a 7-0 run to close out the first half and trim the deficit to two points.

In the second half, Drake ran out of gas against the Ramblers’ tough defense. Loyola Chicago defeated Drake by six points after going 0-2 during the regular season. Williamson led the Ramblers with 18 points and 10 rebounds. Aher Uguak added 16 points and hailed down 10 boards as well.