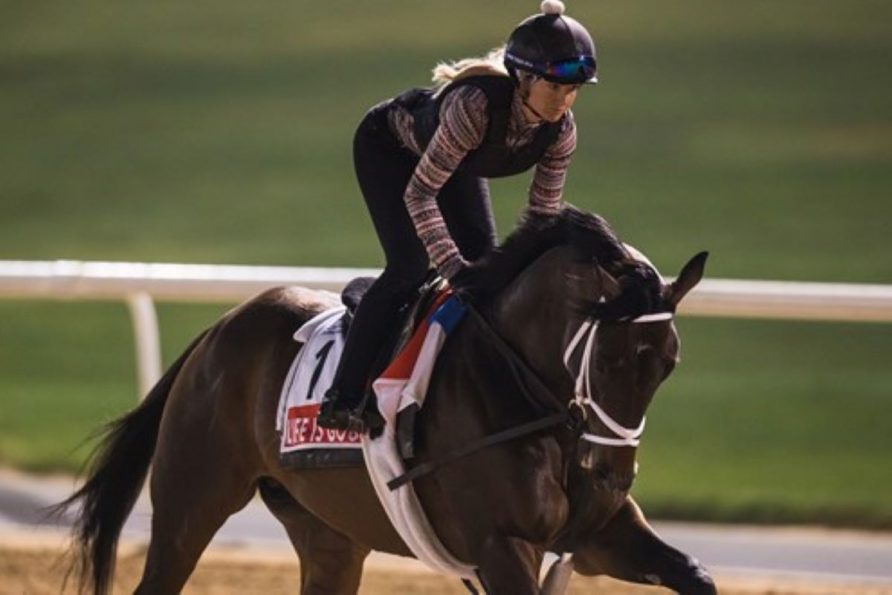 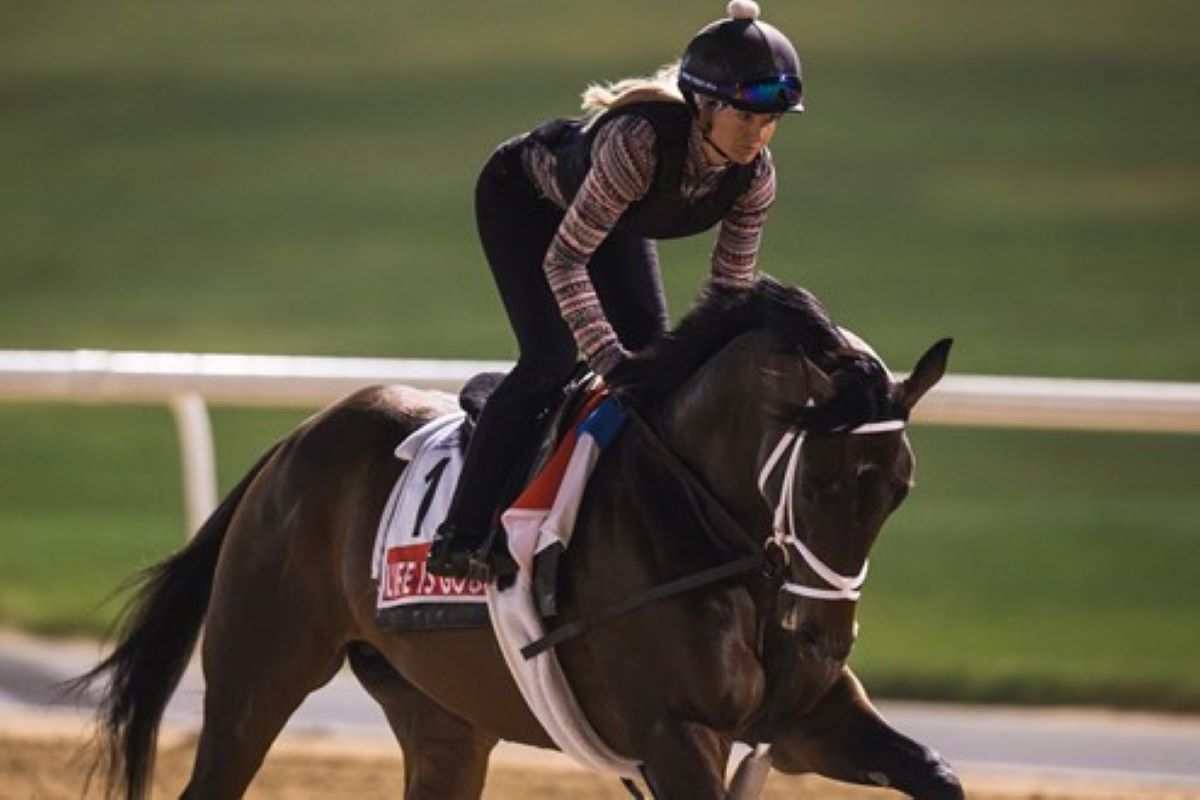 Life Is Good works out this week before Saturday’s $12 million Dubai World Cup. He is the 4/5 international morning line favorite. (Image: Erika Rasmussen)

All competing for a better-than-great $12 million purse at Meydan Racecourse in Dubai. Post time is 12:30 p.m. ET.

There are six Group or Grade 1 winners entered in the 11-horse field for the world’s second richest race. Yet all eyes will be on the rail post, where Life Is Good finds himself. That puts the onus on jockey Irad Ortiz Jr. to get Todd Pletcher’s charge out solid and quickly.

Can Life Is Good stretch out again?

“His first step is OK. Second, third and fourth are outstanding, Pletcher said.

It may be what happens considerably later in the race that will determine Life Is Good’s shot at winning his third consecutive Grade/Group 1 race. The 1 ¼-mile/2,000-meter Dubai World Cup is a furlong farther than the Into Mischief progeny has traveled in his six races. Not that every stretch-out has been a problem. Life Is Good dominated the Breeders’ Cup Dirt Mile. He dominated last year’s 1 1/16-mile San Felipe. He dominated the 1 1/8-mile Pegasus World Cup last out.

“The Pegasus was his first time at a mile and an eighth and he handled that well, so we’ve focused on just some good stamina-building breezes and strong gallop outs,” Pletcher said. “He does everything so willingly; he likes doing it, enjoys his job and all his works have been super good.”

Life Is Good’s M.O. is no mystery, especially from that inside post. He will break quickly and dare everyone to run with him. One who may not blink at this is Hot Rod Charlie (3/1). All he’s been doing the last two months is acclimating himself with the Middle East. The comfort zone improved with an easy victory in the Maktoum Challenge Round 2 – a 1,900-meter race. Given we’re talking about a horse who nearly won the 1 ½-mile Belmont Stakes in gate-to-wire fashion, distance won’t be an issue here.

“This horse, I really think he can run all day; he never seems to get tired,” said Leandro Mora, chief assistant to trainer Doug O’Neill, who has been in the Middle East the last two months with Hot Rod Charlie. “Life Is Good is a good horse, but we’re here and we know he likes the track.”

Then, there’s the likely X-factor: Country Grammer (8/1). All he did last out was come into the $20 million Saudi Cup off a nine-month hiatus and finish a strong second. Like Life Is Good and Hot Rod Charlie, Country Grammer does have a Grade 1 notch on the belt. He won last spring’s Hollywood Gold Cup before going on the shelf for the duration of 2021.

“It’s not often you can run in a $20 million prep race for a $12 million race,” said Jimmy Barnes, trainer Bob Baffert’s assistant. “He really showed up last time and all signs are good for this. I really believe he is a mile and a quarter horse.”

As for Midnight Bourbon (10/1), we know he can go the distance and we know he’ll likely be in the mix throughout. But it’s been illustrated time and time again that he doesn’t have the tactical speed to catch horses like Life Is Good or familiar rival Hot Rod Charlie in the stretch.

The American dominance in this race is illustrated by the fact no international runner carries odds better than 20/1. That includes Japan’s Chuwa Wizard, who is 30/1 despite finishing second in this race last year to Mystic Guide.