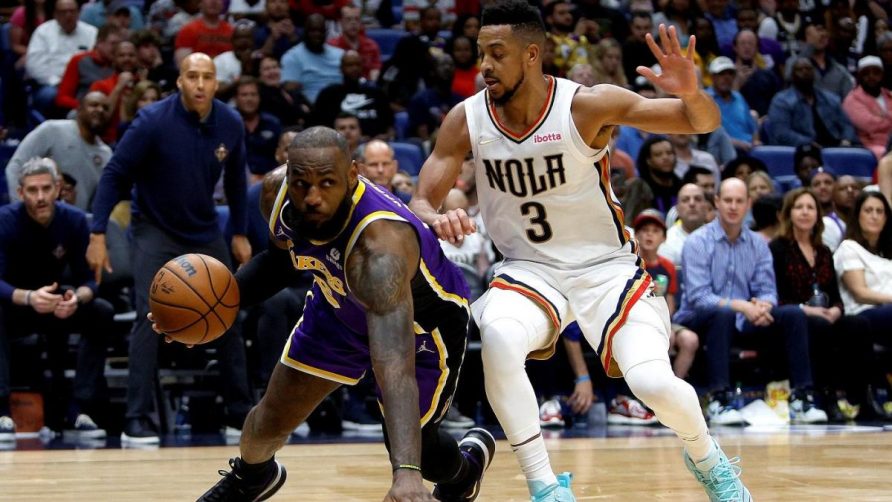 It’s the penultimate weekend of the NBA regular season and the fierce fight for the #1 seed in the Eastern Conference continues with 2.5 games separating the top four teams. Out in the Western Conference, the banged-up LA Lakers and San Antonio Spurs are fighting for the final spot in the play-in tournament, but both teams trail the New Orleans Pelicans by two games. 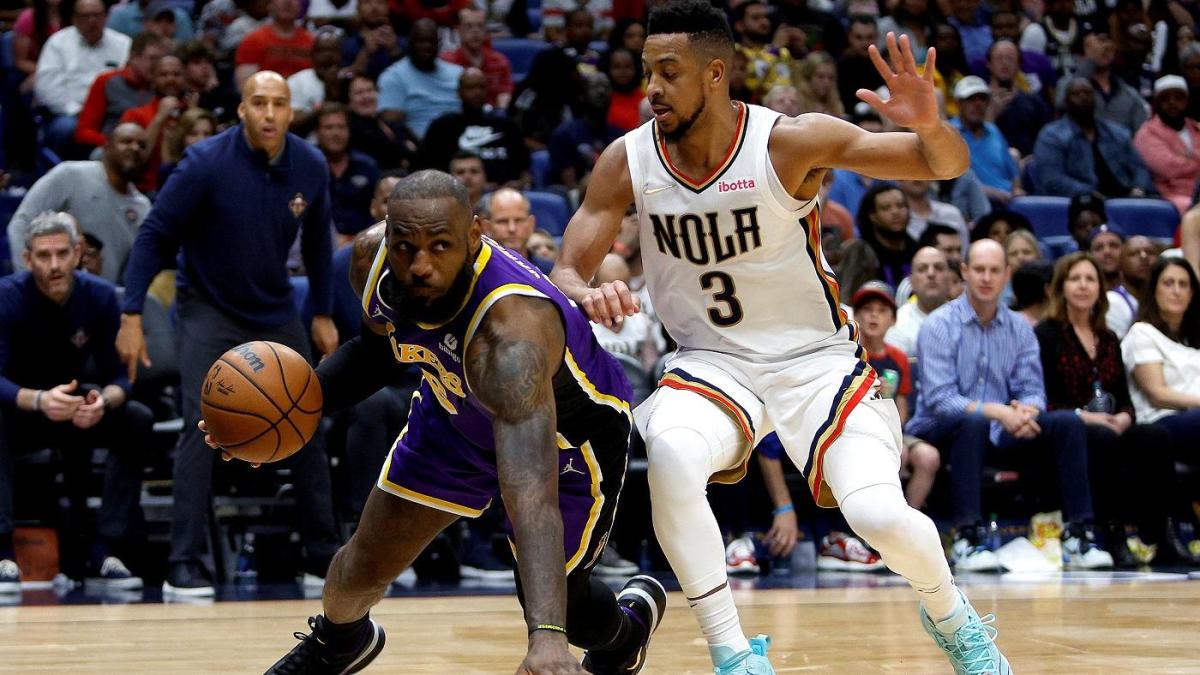 LeBron James from the LA Lakers slips while trying to drive by CJ McCollum of the New Orleans Pelicans. (Image: Sean Gardner/Getty)

LeBron James suffered a sprained ankle on Sunday, and skipped games this past week to make sure he can be ready to play the Pelicans in Hollywood on Friday night. He’s chasing a scoring title and a chance to qualify for the postseason.

The Pelicans/Lakers game also marks the potential return of Anthony Davis, who missed the last six weeks due to a foot and ankle injury. The Lakers went 4-14 without Davis in the lineup since the All-Star Break. They’re getting him back at the perfect time because the Lakers.

Phoenix Suns (62-14) at Memphis Grizzlies (54-23)… The teams with the two-best records joust in the marquee matchup of the week. The Suns/Grizzlies could also be a preview of the Western Conference Finals, with both expected to earn the top two seeds. The Grizzlies decided to sit Ja Morant the remainder of the season so he can rest his sore knee, but Grizzlies keep winning without him and riding high on a six-game winning streak.

Portland Trail Blazers (27-49) at San Antonio Spurs (31-45)… It’s essentially playoff time already for the Spurs and Lakers. They have the same record, but the Spurs hold the tiebreaker, which is why they’re in the #10 seed and the Lakers are on the bubble in 11th place. Weirdly enough, the Spurs are a better road team (17-21) than home team (14-24). The Spurs are -15 favorites in this must-win spot.

New Orleans Pelicans (33-43) at LA Lakers (31-45)… The Pelicans hold a two-game lead over the Spurs and Lakers, but look to pad their lead as the #9 seed. The Pelicans rallied and overcame a 20-point deficit to defeat the Lakers last Sunday, but LeBron dropped 39 points in the loss despite an ankle injury. The desperate Lakers want to avoid missing the playoffs by bubbling the play-in tournament.

Charlotte Hornets (40-37) at Philadelphia 76ers (46-30)… Joel Embiid (30.0 ppg) finds himself in a tight race for the NBA scoring title, plus he’s a coinflip to win the MVP and deny Nikola Jokic back-to-back trophies. Meanwhile the 76ers jockey for one of the top seeds in the postseason.

Brooklyn Nets (40-37) at Atlanta Hawks (40-37)… The Hornets, Hawks and Nets locked up spots in the play-in tournament, but they’re now fighting for a chance to play in the #7 vs #8 game where the winner gets the #7 seed. The Hawks won four in a row without John Collins in the lineup. Trae Young has been on fire the last couple of weeks with four 40-plus-point games since mid-March.

Miami Heat (49-28) at Chicago Bulls (45-32)… The Heat attempt to become the first team in the east to win 50 games. After a hiccup the last couple of weeks, the Heat want to finish the season on a strong note and secure home-court advantage with the #1 seed. Da Bulls struggled in the last month, but DeMar DeRozan is fresh off a 50-point eruption.

Denver Nuggets (46-31) at LA Lakers (31-45)… Nikola Jokic is the slight betting favorite to win the MVP over Embiid. But now the Joker goes to Hollywood for a chance to show off his MVP-skills under the bright lights on Tinsel Town. The Lakers are trying to chase down the Spurs, but the Nuggets have a chance to derail the Lakers pursuit of the play-in tournament.

Miami Heat (9-28) at Toronto Raptors (44-32)… The Heat are 4-9 SU and 5-8 ATS on the second night of a back-to-back. It’s a fade-worthy spot. The Raptors are the hot team in the east right now after winning four games in a row and seizing the #6 seed. They’re close to catching the Bulls for the #5 seed. Betting wise, the Raptors have the fourth-best betting record in the NBA at 43-32-1.

Portland Trail Blazers (27-49) at San Antonio Spurs (31-45)… The Spurs square off against the Blazers for the second time in three nights down in San Antonio. Expect the bookies to install the Spurs as another double-digit favorite in this game with play-in tournament implications.

New Orleans Pelicans (33-43) at LA Clippers (37-40)… Paul George returned to the Clippers this week and led them to a comeback win against the slumping Utah Jazz. He’s just getting his groove back after missing several months with an elbow injury. The Pelicans complete their double-dip in LA with their second game in the last three nights — with the Lakers on Friday and Clippers on Sunday. Kudos to the crew and staff at Crypto.com Arena who host a doubleheader on Sunday with the Lakers/Nuggets at 12:30 and the Clippers/Pelicans at 6:30.