Erling Haaland is close to joining Manchester City at the end of the current campaign. The 21-year-old Norwegian will turn down interest from Real Madrid, Barcelona, Manchester United and Bayern Munich to play under Pep Guardiola. According to The Athletic, Haaland’s representatives have already agreed personal terms with City. 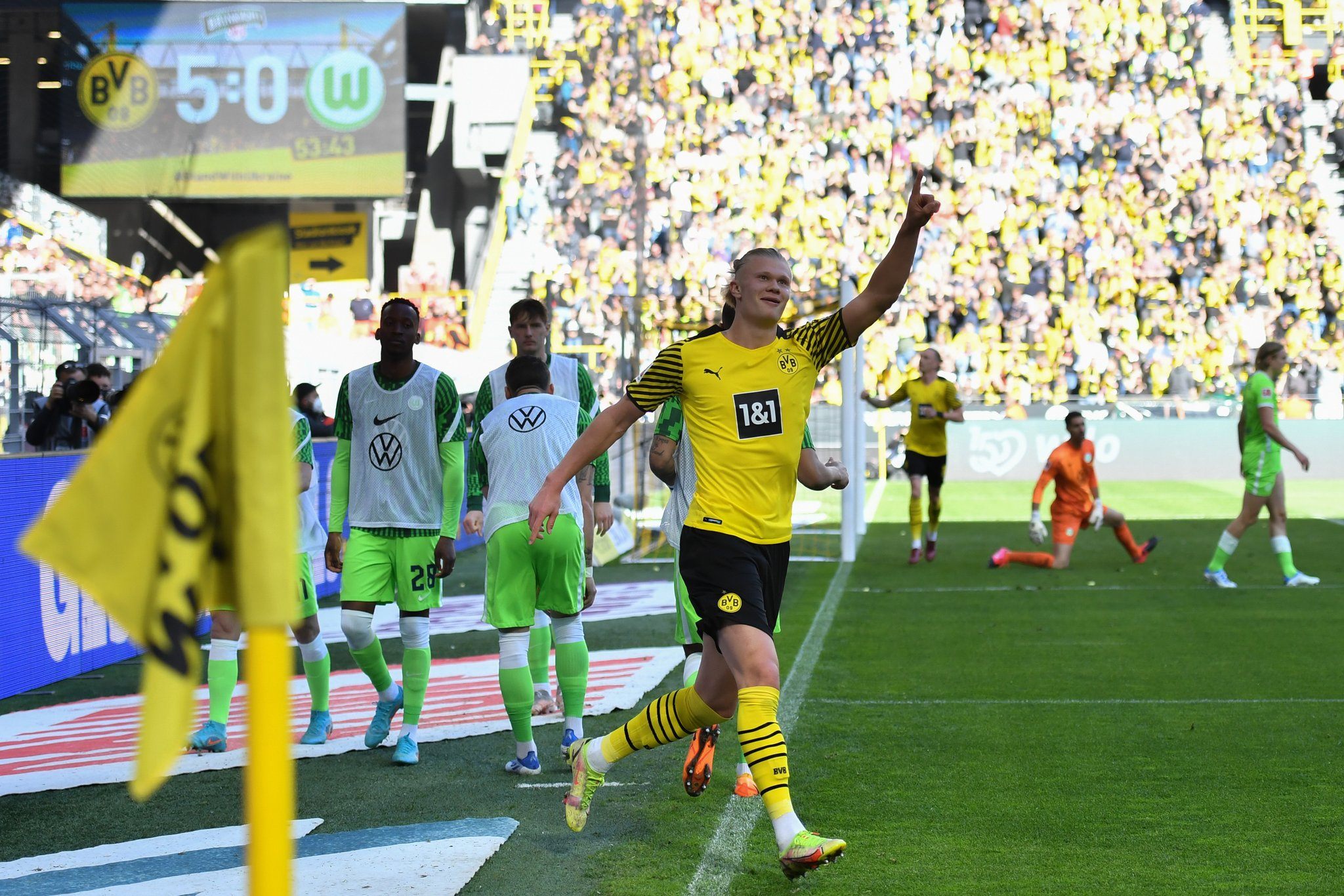 The English Premier League leaders are expected to pay Dortmund $80 million, which is Haaland’s release clause starting July. A year ago, the German club refused all transfer talks concerning Haaland, despite Chelsea plotting a bid as high as $210 million.

Haaland’s wages at the Etihad will be record-breaking. He’ll be on a $650k per week salary, $150k more than what De Bruyne and Cristiano Ronaldo are making at City and Man. United respectively. The Viking will turn into the best-paid player in the Premier League once his transfer is completed.

On Tuesday, City boss Pep Guardiola spoke to the media in a press conference ahead of his team’s match against Brighton. When asked about City’s intention to pay Haaland’s release clause, Pep chose not to comment in any way.

Haaland was born in Leeds in 2000, as his dad, Alf-Inge, was playing there. The former defender then moved to none other than City, where he played for three years. He couldn’t produce the desired impact in City’s defense because of his knee problems and finally retired aged 31 in 2003. In total, Haaland Senior played 10 years in England for the likes of City, Leeds and Nottingham Forest.

Bets on Erling Haaland joining Manchester City are not accepted anymore, with the bookies all but certain themselves that the player has made up his mind.

How will Haaland perform in the Premier League?

Erling Haaland just hit a brace against Wolfsburg at the weekend, reaching 33 goals in all competitions for club and country since the start of the season. Despite being out with three different one month-long injuries, Haaland’s form didn’t suffer, as he always came back even hungrier than before.

Football data platform Comparisonator tried to use Haaland’s numbers to create a projection on what his record in the Premier League would look like. Through a virtual transfer feature, Haaland’s entire data has been moved to the Premier League to serve as an indicator of his impact. 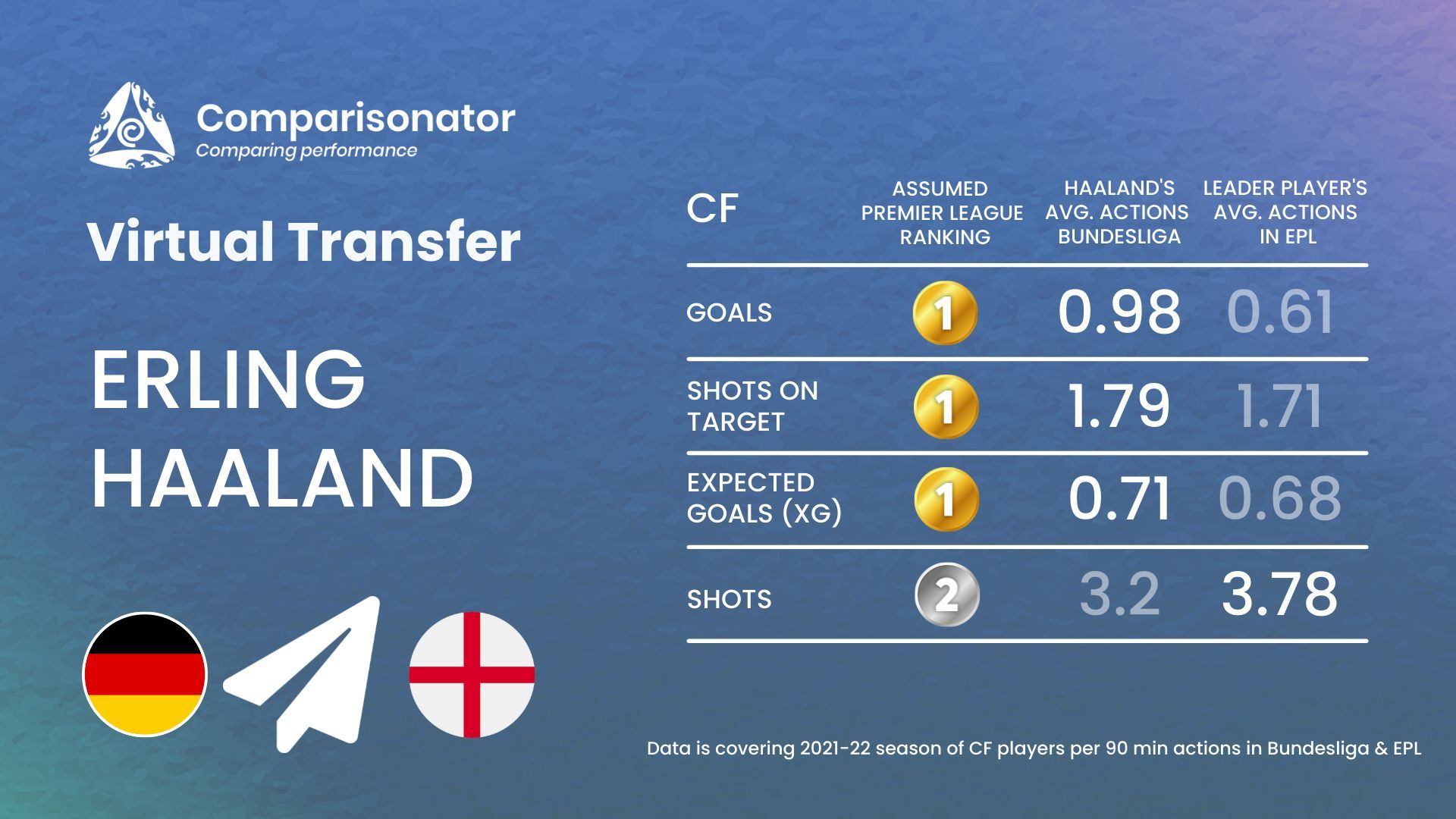 A replication of Erling Haaland’s Bundesliga numbers in the Premier League would see him top the central forwards’ rankings. (Image: comparisonator.com)

The striker would top the goals, shots on target and expected goals sections, ahead of the best forwards in the Premier League at the moment.

The major concern among Man. City supporters is Haaland’s apparent fragility. He spent almost two months on the sidelines with recurring thigh injuries last autumn, then couldn’t be counted on for a month and a half this year. According to German portal Sport1, Haaland and his entourage didn’t want the diagnosis of his latest injury to be published by the media so he wouldn’t be associated with injuries.

According to the German journalists, his latest upset was caused by a torn thigh muscle at the end of January. Haaland only played 26 of Dortmund’s 42 games this season. Dortmund manager Marco Rose suggested Haaland even refused to have scans on his latest ailment.

Haaland netted a total of 82 goals in just 85 matches for Dortmund after joining for $21.5 million in January 2020.