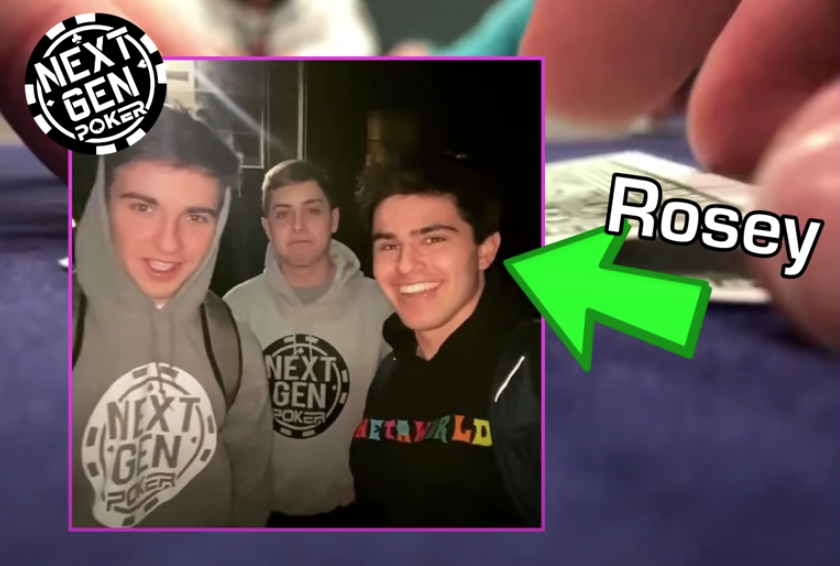 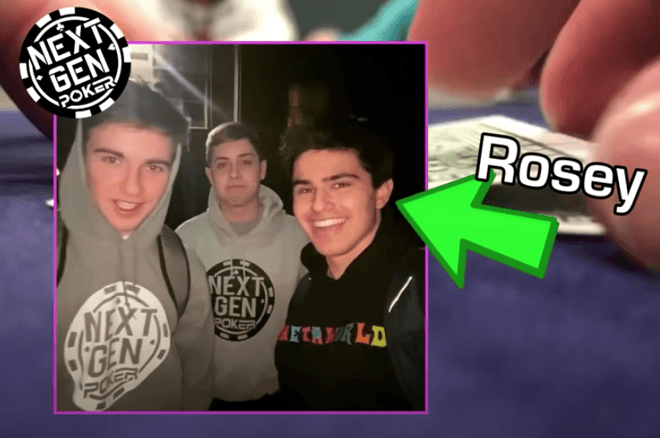 Those were the world Rosey of Next Gen Poker, who were recently guests on the PokerNews Podcast, heard just before an opponent jammed the river. This was a brilliant hand to look over where a tilted player goes absolutely wild!

The hand was played in a $1/$2 no-limit hold’em cash game at a Texas cardroom. He looked down at the

UTG+1 and raised to $15, which in a $1/$2 game is a huge raise size at 7.5x compared to the traditional 3-4x size that you usually see in live games. That said, everything is bigger in Texas, so I am told.

Using a large raise size preflop is a great way to extract value from loose opponents that will still call regardless of the size. However, if your opponents are going to play poorly post-flop then you should be more inclined to use a smaller raise size which encourages them to play with weaker hands.

“These types of players that are on tilt will sometimes chase their losses so be prepared to get stacks in against them with more marginal hands.”

Action folded around to the player in the big blind, who had just rebought after losing his entire stack when his aces were cracked. That is relevant information. You will find that loose and splashy players are very susceptible to going on tilt if they get unlucky. Be prepared to take advantage of that. These types of players that are on tilt will sometimes chase their losses so be prepared to get stacks in against them with more marginal hands.

The big blind called and the flop fell

to give Rosey the nut flush draw. The big blind checked and Rosey continued for $15. The big blind then check-raised to $55. Playing $300 effective, what would you do in this spot?

This is a spot where I think your only options are to call or shove, though I don’t really like shoving because if your opponent really is on tilt they could have all sorts of nonsense. If Rosey were to raise he would force his opponent to fold a lot of the bluffs that his hand is currently ahead of.

Anytime you are getting very good pot odds immediately to try to draw, calling is always a viable option. We’re not folding here. Should we click it back to maybe $110? That may induce the opponent to get it all in with their bad draws. If Rosey’s opponent has a marginal draw they might call a small three-bet but then fold to further aggression on the turn, which is perfect for a non-made hand like

Rosey wound up calling and the

appeared on the turn. The big blind bet $91 and Rosey, who made top pair to go along with his flush draw, just called. I like it. This is not a spot that Rosey should shove as the large majority of hands that will call will be ahead of him, while all worse hands would likely fold. That said, shoving isn’t the worst thing in the world as Rosey would still have decent equity against any made hands. 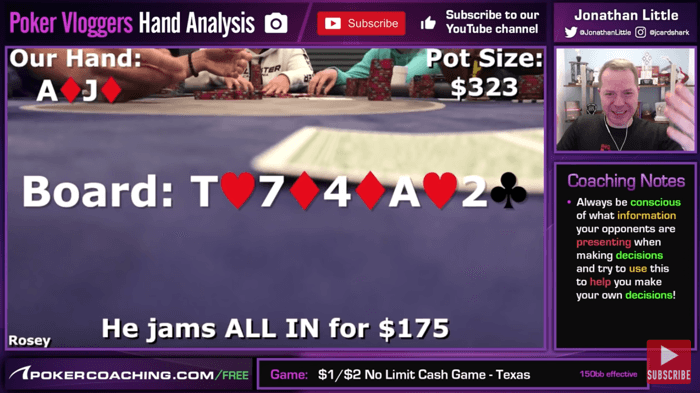 Rosey just called and the

completed the board on the river. The player in the big blind gave a little “Mmmmm” and then moved all in for $175. Rosey had a decision to make. Always be conscious of what information your opponents are presenting when making decisions and try to use this to help you make your own decision.

I didn’t like the little “Mmmm,” but I still think I call. There are so many busted draws. The

river only completed one potential draw the opponent could have which means there are still many missed draws in the big blind’s range. I probably just pay here while not liking the crying call.

Rosey, who needed to win roughly 26% of the time for this to be a profitable call, wound up folding in this spot, meaning we’ll never know whether or not he was good.

For more on this hand and my thoughts, check out my breakdown in the following video:

Jonathan Little is a professional poker player and author with over $7,000,000 in live tournament earnings. He writes a weekly educational blog and hosts a podcast at JonathanLittlePoker.com. Sign up to learn poker from Jonathan for free at PokerCoaching.com. You can follow him on Twitter @JonathanLittle.