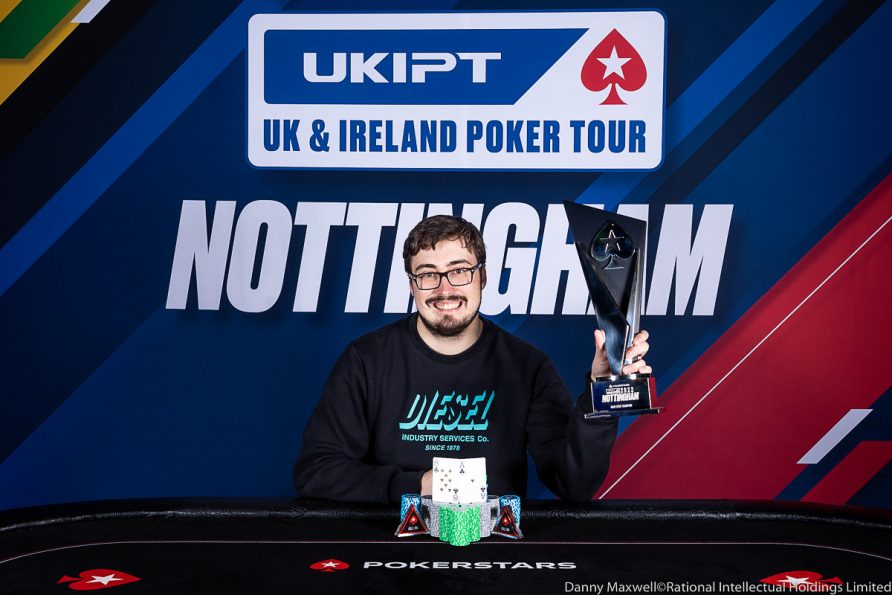 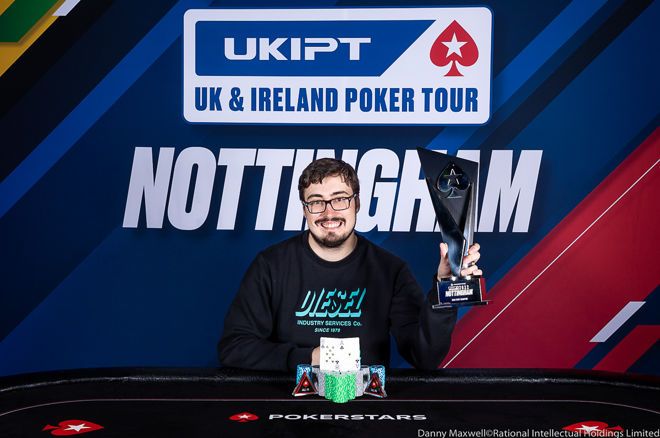 Hometown hero Adam Maxwell won the PokerStars UKIPT Nottingham Main Event on its return for £98,150 at Dusk Till Dawn poker club. The 27-year-old Nottingham local managed to come out on top of the 582 entrants field to take home the trophy in front of his friends. The professional poker cash game player previously had just over $200,000 in live tournament winnings where he exclusively plays at Dusk Till Dawn Nottingham.

Maxwell started Day 3 second in chips and managed to navigate through the tough field to come out on top after a competitive heads-up battle with fellow professional Jonathan McCann. The two struck a deal after Maxwell won a big pot heads up where he caught McCann bluffing with a busted flush draw in which Maxwell secured £81,010 compared to McCann’s £74,500. The two had to play for the remaining £17,140 as well as the UKIPT Nottingham Main Event trophy.

PokerNews caught up with Adam Maxwell after the biggest win of his career. His previous biggest score was a fourth-place finish in a £1000 tournament at Dusk Till Dawn for £30,000. When asked about his big win, Maxwell said, “It feels very good; it’s not quite sunk in yet.”

When asked about the heads-up battle with Jonathan McCann, Maxwell said, “It was a tough battle, but I feel like the cards went my way”.

PokerNews asked Maxwell about his start in poker. He said that he started playing in school with his friends in £10 home games before starting to play online. He said, “(I started taking poker more seriously) in my second/third year of university.”

When asked about what kinds of games Maxwell plays, he said that he is a cash game player who only focuses on no-limit hold’em. Maxwell said that the bubble was a key point in his tournament as that was when he started to accumulate a lot of chips and emerged as a big stack. Maxwell said he would be back to grinding cash and continue to play the tournament series when they happen at Dusk Till Dawn. Maxwell will not have to wait long as Dusk Till Dawn will be getting prepared for PokerStars LIVE Road to PSPC Nottingham, which will be from the 25-29th of August.

The final table started off quick as the extended final table bubble on Day 2 left many short stacks at the start of play. Start-of-day short stack Tom Simm was the first to go as his ace-queen lost a flip to start-of-day chip leader David Ledden’s pocket jacks.

Next to go was Philip Clarke, who shoved his pocket deuces for five big blinds from the big blind over Daniel Gormley’s raise. Gormley had queen-ten and won the flip to send Clarke home.

Alex Montgomery was next to go as he shoved king-ten from the small blind only to lose to Michael Howard’s ace-nine.

Fabio Sperling’s elimination in sixth ensured there would be a British champion as the German was unfortunate to run into Maxwell’s pocket threes when Sperling shoved ace-three from the small blind.

Gormley was eliminated next as he limped shoved ace-ten from the small blind only to run into Ledden’s pocket queens. There was no ace for Gormley which sent him to the rails.

Michael Howard called for his tournament life on a three-diamond ace-high board with pocket kings with the king of diamonds but was up against McCann’s flush to send him home.

Three-handed lasted a while where Ledden lost his chip lead to McCann, who was in pole position before Maxwell eliminated Ledden with pocket tens against Ledden’s ace-nine.

McCann went into the heads-up battle with the chip lead but was caught bluffing, which put Maxwell into the lead. Action paused while a deal was agreed between the two players. They came back to battle for the trophy and remaining prize money. It was a drawn-out affair before Maxwell eventually ground McCann down to take down the trophy. McCann shoved over Maxwell’s limp with king-four but he was behind against Maxwell’s ace-eight. Maxwell turned a straight, and the river came a brick to give the title to Nottingham local Maxwell.