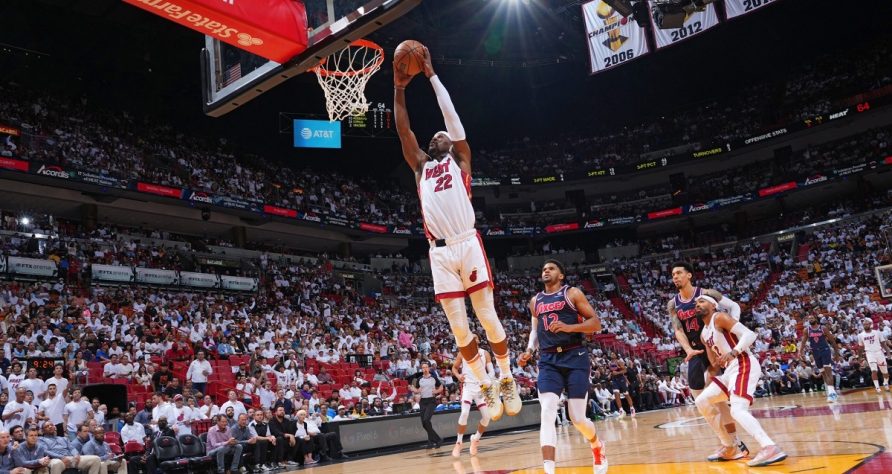 Eight teams remain in the hunt for the 2022 NBA championship with four teams in each conference vying for their respective conference title and a berth in the NBA Finals. The Miami Heat at +135 odds are the betting favorite to win the Eastern Conference head ahead of the Boston Celtics (+180), and Milwaukee Bucks (+290). Out in the Western Conference, the Phoenix Suns are -120 odds to win back-to-back conference crowns and ahead of the Golden State Warriors (+165) and Memphis Grizzlies (+750). 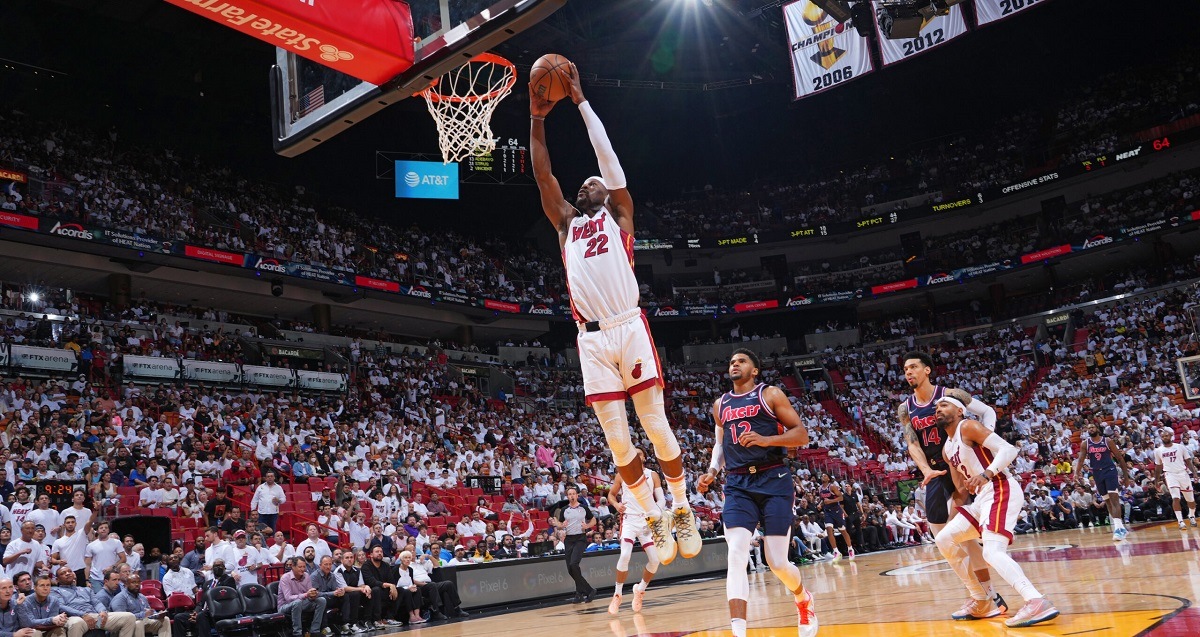 Jimmy Butler from the Miami Heat elevates for a dunk against the Philadelphia 76ers in the Western Conference Semifinals. (Image: Jesse D. Garrabrant/Getty)

The Miami Heat and Phoenix Suns won two games at home to start the conference semifinals, and both teams hold a 2-0 series lead, so it’s no surprise to see them at the top of the NBA futures board to win their respective conference.

The Suns, last year’s runner up, are also the consensus favorite to win the 2022 NBA championship at +200 odds. The Warriors are the second highest team on the board at +340 odds to win their first championship since 2018.

Oddsmakers did not have much faith in the Miami Heat before the season began because everyone had jumped on the Brooklyn Nets bandwagon. You could’ve backed the Heat at +2500 odds in the preseason, but right now they’re the favorite to win the Eastern Conference at +135 odds. The Heat won the Eastern Conference two seasons ago inside the NBA Bubble during the 2020 pandemic-shortened season, yet they were unable to beat LeBron James and the LA Lakers.

The Boston Celtics also did not draw a lot of money from bettors in the preseason at +4000 odds. They had a rookie head coach with Ime Udoka who was untested and lacked experience. The Celtics struggled out of the gate, but everything came together for them in January — especially on the defensive front — and they went on a heck of a heater to close out the season. Udoka led the Celtics to the best record in the second half of the season and they secured the #2 seed. They didn’t duck the Brooklyn Nets and obliterated them in first round. The Celtics are tied with the Bucks right now at 1-1, but they’re +180 odds to win the Eastern Conference.

A lot of experts suggest that the winner of the Bucks/Celtics series will go on to win the conference. The Bucks are +290 odds to win back-to-back conference titles and return to the NBA Finals to defend their title.

The Phoenix Suns also were not a popular pick in the preseason at +700 odds because the legion of Lakers fans had faith that LeBron James would deliver a second championship in three seasons. Of course, the Lakers were awful this season and failed to qualify for the playoffs.

The Suns were essentially the same squad as last season, but a lot of bettors and prognosticators felt they had an easy path to the 2021 NBA Finals due to injuries to Anthony Davis, Jamal Murray, and Kawhi Leonard. Chris Paul and the Suns proved last season’s deep run was not a fluke when they posted the best record in the NBA this season. The Suns began the postseason as the team to beat, and they were +110 odds to win the Western Conference. After securing a 2-0 lead against the Dallas Mavs, the Suns are still the top favorite at -120 odds to win back-to-back Western Conference titles.

The Golden State Warriors were a popular pick to win the conference in the preseason at +400 odds, yet find themselves deadlocked 1-1 against the Memphis Grizzlies in the Western Conference Semifinals. You can back the Warriors at +165 odds, but have yet to solve the Ja Morant riddle. If the Warriors slow down Morant and win the series, then they get to battle the Suns for the conference crown.