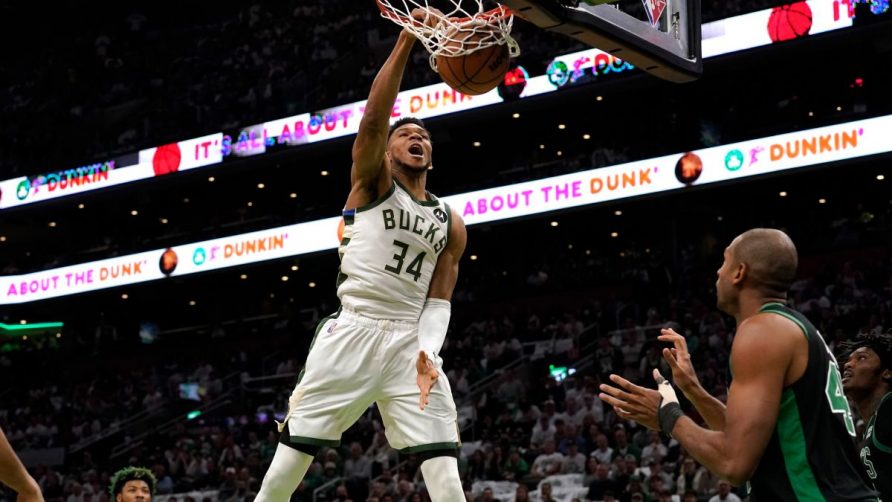 The Milwaukee Bucks dominated the Boston Celtics to win Game 1 of the Eastern Conference Semifinals because of a heck of a performance from Giannis ‘Greek Freak’ Antetokounmpo, who tallied a triple-double with 24 points, 13 rebounds, and 12 assists in the victory. 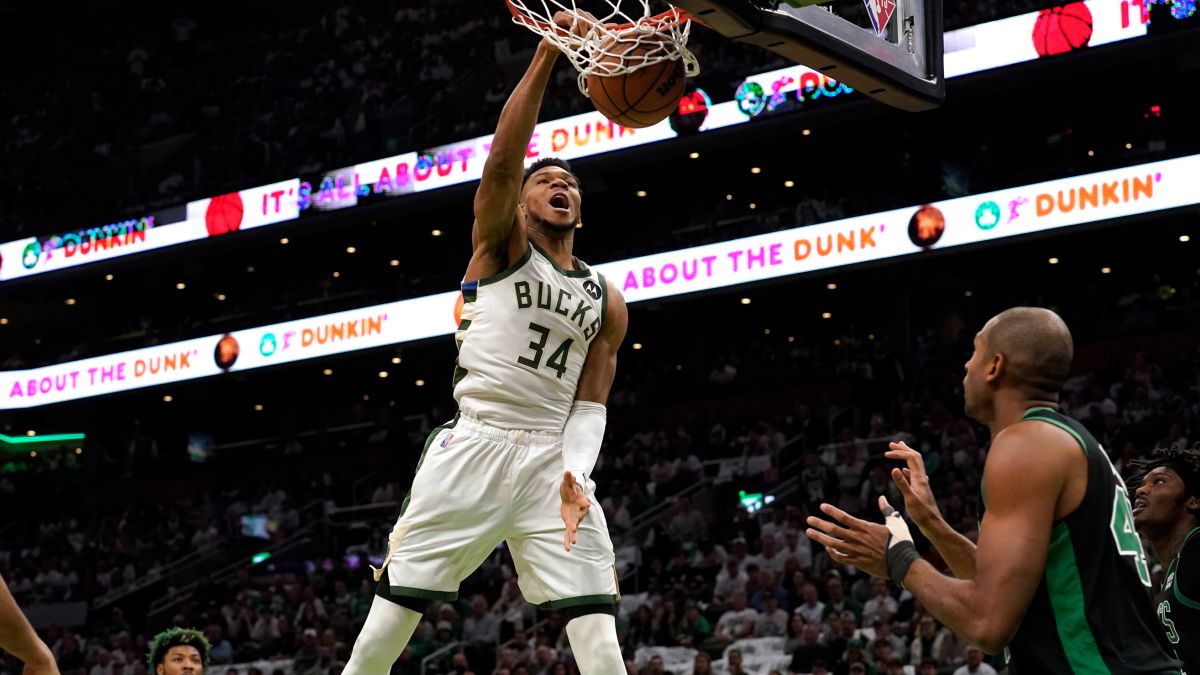 Giannis ‘Greek Freak’ Antetokounmpo throws down a dunk for the Milwaukee Bucks in a Game 1 victory against the Boston Celtics in the Eastern Conference Semifinals. (Image: Getty)

It marked the second time he notched a triple-double in the postseason with the defending champion Bucks.

Greek Freak even had a highlight reel moment midway through the fourth quarter when he bailed himself out of a pickle with a self-pass off the backboard that led to a monstrous dunk.

“I had the ball and I was like, ‘Oh, crap, I’m going to get stuck,’” said Antetokounmpo. “So, I threw it to the backboard. I’m lucky enough that God blessed me with the ability to jump. Had a good jump to go get it again and I was able to finish the play.”

“That’s just pure talent, just pure instinct,” said Bucks head coach Mike Budenholzer. “He’s a great player. He does things that are unique and special and timely. That’s one of those plays where you’re happy he’s on our side.”

At the time, the Celtics were trying to mount a fourth-quarter comeback and cut the Bucks’ lead to under double digits, but the Greek Freak helped the Bucks pull away and eventually slam the door on a comeback with a 101-89 victory.

Giannis goes off the backboard for the emphatic slam!#NBAPlayoffs presented by Google Pixel on ABC pic.twitter.com/vyn50aa2Au

With all eyes on the two-way race between Nikola Jokic and Joel Embiid for the MVP, the Greek Freak was the third finalist according to the NBA. He narrowly missed a scoring title averaging 29.9 ppg this season, for second-best in the NBA. He also averaged 11.6 rebounds (ranked #6) and 5.8 assists per game. His PER rating of 32.12 ranked #2 overall in the league trailing only Jokic.

In five games during the first round against the Chicago Bulls, Greek Freak averaged 28.6 points, 13.4 rebounds, 6.2 assists, and 1.4 blocks per game. He posted three games in which he scored 32 or more points.

The Celtics were caught off guard in the first half, and they dug themselves a hole with horrible shooting and stellar defense from the Bucks. Greek Freak unleashed eight straight points at the end of the second quarter to put the Bucks up by 10 at halftime, and he was more than half the way toward a triple-double.

“Too careless,” admitted Jayson Tatum about the defensive lapse. “The Bucks are a physical team and a really good team. We can’t just let them speed us up like that. We got to be stronger with the ball, more decisive with the decisions that we make.”

Check out more video installments of NBA High Guys. And take a peek at OG’s coverage of the 2022 NBA Playoffs.